At the 2019 VCFA alumnx reunion with Sharon Darrow and Jacqui Lipton. Photo by Patti Brown, used with permission.

On Sunday night I returned from my VCFA alumnx reunion, where I caught up with other writers of children’s and YA books, as well as people who teach writing to young people. There, I spent time with Katie Bayerl, the founder of the VCFA Young Writers Network, an ever-expanding program that brings VCFA grads to underserved schools. Katie and I share a dedication to writing beyond the Hero’s Journey, the individual-focused first-person narrative that dominates fiction (at least in the U.S.) in general, and young adult fiction in particular.

I told Katie that upon my return from VCFA, I would be attending a lecture on non-heroic narratives the next day. So last night I braved a steady wind-blown rain to see Polish-Ukrainian scholar Aleksandra (Ola) Hnatiuk speak at the Brooklyn Public Library about the new English edition of her oral history Courage and Fear: Non-Heroic Narratives of Occupied Lwów, translated by Ewa Siwak. 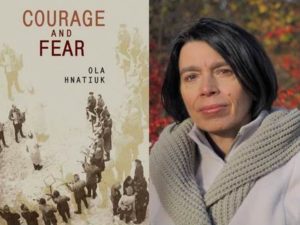 Dr. Hnatiuk’s work stands at the intersection of history, memoir, and literary criticism. She presents the testimony of ordinary people — though those from the Polish aristocracy and intelligentsia dominate — as they experienced the Soviet invasion of their city in eastern Poland in 1939, following the signing of the Ribbentrop-Molotov Pact. Over the next six decades, this predominantly Polish city was incorporated into the Soviet Union and is now a cultural capital of Ukraine. The Jewish population, one-third of the total before the war, fled or was exterminated following the Nazi invasion. Many returned in the 1950s but left again in the following decades. The Polish residents moved westward along with Poland’s boundaries after the war. Listening to her lecture, I got a sense of the massive displacement of people during and after the war and the postwar efforts to homogenize European populations in terms of language, religion, and nationality to avoid this kind of conflict happening again. The postwar era represented an end to the easy interchange of people and cross-fertilization of ideas that characterized the interwar period, to the extent that one of her world-traveling subjects, a Jewish songwriter named Eugeniusz Bodo, was accused of spying and disappeared into a Soviet gulag in the 1940s.

While none of the other subjects Dr. Hnatiuk described in her talk suffered as greatly as Bodo did, the war altered their lives. One daughter of Polish aristocrats traded her elegant clothing and coiffure after the war for the drab uniform and severe hairstyle of a Communist Party apparatchik. A daughter of Ukrainian diplomats joined a resistance army and married its leader after he divorced his first wife in 1948. 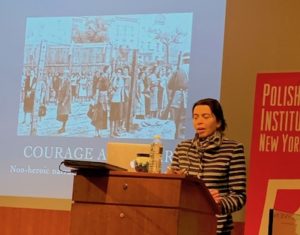 Ola Hnatiuk speaks next to a sign for the co-sponsor that invited me, the Polish Cultural Institute.

In telling the stories of people who didn’t change the course of history and whose lives show the range of choices people made under duress — the good, the bad, and the ugly — Dr. Hnatiuk calls for empathy and understanding of how they suffered. She defines the Non-Heroic Narrative as the untold story: personal, displaying many shades of gray, calling on us to empathize with the Other rather than othering, looking beyond the master narrative of world-changing action or heroic martyrdom, and identifying ways that people were forcibly marginalized or oppressed. She cited women and Jews as examples of people who experienced further marginalization and exclusion from the heroic canon; in listening to her presentation, one might also add people who were not part of the aristocracy or intelligentsia.

In Courage and Fear, the voices of Lwów’s unsung residents create a collective voice of a city occupied by alternating enemy armies, and people choosing to hunker down, flee, or join the strongest force in the area — quickly identified as the Soviets, as there were few Nazi collaborators but many Soviet ones. Beyond the untold histories, the book is a literary work. It explores ways of telling stories that go beyond the single “great man” to showing the messy realities of daily life under duress — the human consequences on a dozen small scales of decisions made by “great men.”