I’ve just returned from a family vacation, the vacation being the reason for my blog’s sleepiness in the past couple of weeks. I’ve put it in my calendar to write about the challenges of finding Internet service on the road, especially out of the United States where 4G service is either unavailable or prohibitively expensive for those of us with U.S. cell contracts. In any case, my family would have never let me forget it if I’d spent our days in Amsterdam and Paris updating my blog rather than spending time with them. Sometime soon, I’ll write about my travels and a unique way of spicing up and remembering a family trip. If you’re on Instagram, you already know. And the saga isn’t over yet. 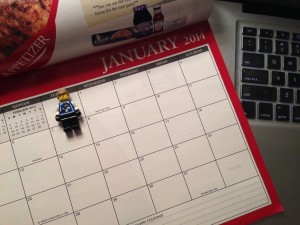 A common practice for the New Year is the creation of New Year’s resolutions. These New Year’s resolutions are a little different from the ones I described for the Jewish New Year in my post “Teshuvah.” Secular New Year’s resolutions generally have less to do with how we treat other people and the planet and more to do with self-improvement. Diets and exercise programs tend to dominate the resolution list, and it is no coincidence that gyms compete for business with discounts and other special offers at this time. (I’ve heard that the customers who signed up for the one-year plan stop coming around February, but I don’t know for sure. I’ve never joined a gym and never plan to.)

My New Year’s Resolution this year is a new one for me. No, it’s not a diet (been there, done that) or the gym (see above). I’m going to send out job applications. From 1990 through 2010, I was employed at the time of the New Year, first as a reference librarian at a small Catholic college in the Albany area and then as Editor-in-Chief of MultiCultural Review. After MultiCultural Review folded, I was a student again, at Vermont College of Fine Arts, and then I was busy revising and promoting Rogue. But all of that has come to an end, at the same time as the improving economy has given me reason to be optimistic about my job prospects.

I’ve spent several months contemplating my next move. Over the summer I submitted an application to work at the Apple Store, and I received an invitation to apply for the company’s management training program. Based on the list of qualifications (and it was a thrill to be able to say “I am actually qualified for this job!”), I suspect that my foreign language skills and experience living abroad played a major role in their interest. But then I thought, “if I take this position, I will be traveling constantly and working 60-70 hours per week. My work as a writer will be over.” Exciting as the position sounded, I wasn’t ready to give up writing, even if I’m never able to publish traditionally again.

I’ve had a lot of experience with jobs that don’t end when the day is done, such as teaching and editing MultiCultural Review. There’s always something more I can do, some way I can make things a little better if I put in those extra hours. When I first started writing, though, I had an office job with a test prep company, and having that job begin and end at a set time, without my needing to prepare for or worry about it in the off hours, allowed me to attend workshops and rewrite my first novel manuscript endless times as I developed my craft. (That manuscript remains in a drawer, by the way.) 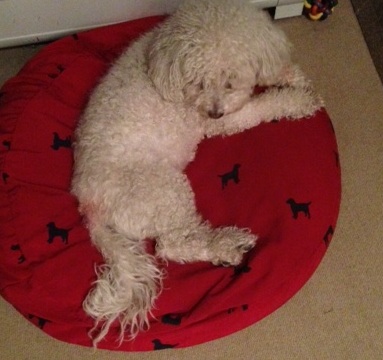 Several years ago, we tried to get Charlie trained as a therapy dog, and my son said, “It’s about time he stopped lying around the house unemployed.” Sadly, Charlie washed out due to barking at big dogs.

Even with my MFA in hand, I feel that I’m still developing my craft. I’m experimenting with graphic novels and, at my editor’s suggestion, trying my hand at picture books. I’ve enjoyed blogging and received encouragement in the form of sponsorships and, most recently, inclusion in a viewing guide from the San Francisco Film Society for the film Fruitvale Station. So I plan to look for an hourly job like those taken by many aspiring artists, writers, actors, and musicians and will keep you posted, just in case you’re in the area and want to stop by and say hi. I expect that the kind of job I get will allow me to work alongside the young people who people my novels, and this job will give me a window into their lives that is different from the one I would get as a teacher or a parent. It will also give me the money to expand my LEGO collection and display it properly, attend conferences, and promote my current and future novels.

I’m looking forward to this new direction, and I hope 2014 is a happy and productive year for you as well.