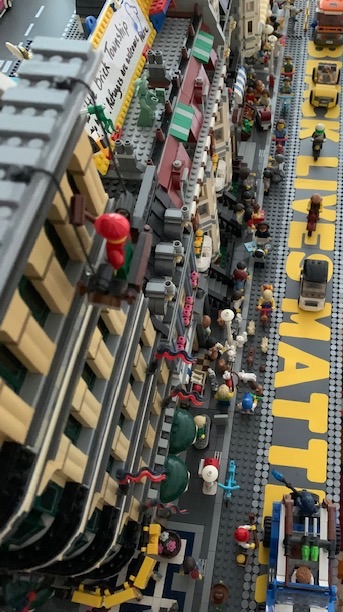 At the beginning of June, as NYPD and protestors of police violence clashed in the streets and the mayor imposed a curfew, a freelance writer with The New York Times, Alyson Krueger, contacted me. She was working on a story about New Yorkers who had fled the city because of the pandemic and the protests, one of what would turn out to be many “fled the city” articles that the Times has featured over the past few months. She contacted me because I had responded to someone else on Twitter who was considering fleeing Florida because of her governor’s nonchalant attitude toward Covid-19, mask-wearing, and closures. I urged her to come to New York, where the governor had taken a more aggressive role in containing the virus after it ravaged our state and city in the early weeks of the pandemic. In response to her question, I said on Twitter that I would never leave New York City, except maybe to go live in a city in another country.

That’s why Krueger contacted me. After I answered her questions, I became the lead informant in the Times article, playing the part of the New Yorker undecided about leaving. Along with me were two New Yorkers who’d definitely decided to stay, and two who fled the city.

Last week, a reporter from another magazine contacted me because she was following up with the people featured in various Times pieces over the summer. She wanted to know who had left, who had stayed, and who had left for the summer and returned in the fall. She never followed up, possibly because hours later, Supreme Court justice Ruth Bader Ginsburg died and major newsworthy events have occurred ever since. Nonetheless, a lot of people contacted me in June. I appreciate their concern and want to update them.

The short answer: My husband and I never left New York City. 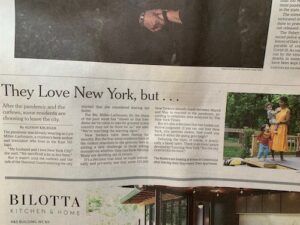 Not even for a weekend in the country, or a few hours at a large, socially-distanced mall. The farthest we went from our lower Manhattan home was northern Brooklyn, helping our daughter move from Boerum Hill to Williamsburg so she could be within walking distance to the elementary school where she teaches. She is about 20 minutes closer to us now via public transportation. Our son and his wife spent some of the summer on Long Island but have stayed in the city all but two weeks since their twins were born.

Now that my ankle has healed, I can walk anywhere, including home from the hospital, more than 100 blocks away, after seeing Jonah and Reed for the first time. Restaurants are serving outside, with increasingly elaborate outdoor dining areas that are fun to observe. We’ve met about a dozen friends over the past few months at some of these places and plan to continue as they install heat lamps. We’re used to eating in cold environments. The months we lived in Portugal included late fall and winter, and few buildings there have central heating. At that time, one of our favorite seafood restaurants catered more to locals rather than tourists, and being outsiders guaranteed us the least comfortable tables right next to the entrance. 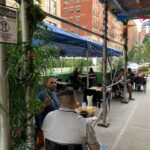 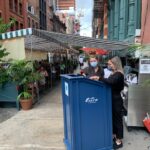 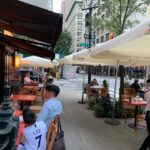 Although my family has stayed, many of my friends have left the city and not returned. These include my writing partner, which means that if I didn’t have a couple of short deadlines for soon-to-be-announced nonfiction projects, I probably wouldn’t get any writing done. (Susan has been keeping me productive for more than five years at this point.) Also gone from the city are several other members of my critique group, one of whom also decamped for her country home and the other to the DC area to be closer to family. Among the members of the PEN Translation Committee that I co-chair until my term runs out at the end of the year, several also went to country homes, while others moved to cheaper cities. By conducting our meetings via Zoom, we’ve been able to include translators scattered throughout the country and in fact have expanded our membership and engagement since the pandemic.

While I miss friends I used to see in person all the time and fear the exodus will endanger the tax base, our quality of life, and, specifically, my daughter’s job that she loves, I find it hard to begrudge people who have left. I still think New York City has a lot to offer in comparison to other places — diversity, creativity, a tolerant atmosphere, and relative safety from armed, pro-Trump militias bent on civil war. In addition, the high rents that have driven creatives out over the past few years are coming down, and the lack of tenants for commercial spaces invites more pop-up restaurants, stores, galleries, and other opportunities for the enterprising folks who have given the city its vitality. Yet, we are still a city in a country in crisis, and whatever happens to that country is going to affect us in the end.