My Husband’s Adventures in Dining: Amsterdam and Paris Edition

My husband’s dream job would be restaurant reviewer. When we lived in Lisbon in 2012, Richard kept notes on all the places where we ate, and his roundup, “Dining in Lisbon,” remains the most popular post on this blog. (Yes, it’s humbling when the most popular post is the blog’s only guest post.) When we returned to the U.S., he became one of the most popular commentators on Opinionated About Dining, a distinction that has earned him free cookies, candies, and other munchies.

We recently traveled with our son and daughter to Amsterdam and Paris, where Richard selected the restaurants and Derrick and Maddy weighed in. Both of them have inherited their father’s foodie gene. I came along for the ride, but I’m the only one in the family who has a blog. (To be accurate, Derrick started a blog with one of his college roommates, but it stalled out after only three entries.)

So here’s my husband’s opinion on our dining in Amsterdam and Paris. First up, Amsterdam:

De Kas remains the most beautiful setting for a restaurant in the city. Set in a former greenhouse in a park, De Kas serves a nightly set menu, but now also allows diners to order select dishes from the menu rather than the entire array of courses. The appetizers are outstanding, especially the fish and seafood selections. They are highly skilled in heir preparation of vegetables. The main course, for which they offer fish and vegetarian alternatives to the usual meat dish, is less interesting. The wine pairing is a good value and highlights Dutch wines.

Wilde Zwijnen, a fairly new restaurant, is receiving deserved attention for their innovative preparations of super fresh fish and seafood. Ron Gastrobar, another new restaurant, is decent but does not deserve the acclaim it has received.

Indonesia used to be a Dutch colony, and there is a sizable Indonesian population and many Indonesian restaurants in Amsterdam. Kantjil & de Tijger is a traditional Indonesian restaurant. It is relatively inexpensive and prepares the dishes well. Blue Pepper offers contemporary interpretations of Indonesian dishes. It is a highlight of the Amsterdam restaurant scene. 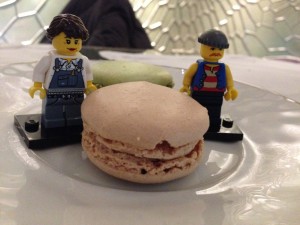 In Paris we had lunch at my daughter’s favorite purveyor of macarons (not macaroons!), La Duree, which has outlets in New York City and elsewhere.

In Paris we ate at some of our old favorites and tried some newer (or at least new to us) restaurants. Maitre Albert, a more causal restaurant from chef Guy Savoy, has perhaps the best roast chicken anywhere, and also other oven roasted meats: beef fillet, veal, along with excellent vegetable side dishes, and some real bargains on their wine list. Maitre Albert is our daughter’s number one choice, and we’ve eaten here every time we’ve found ourselves in Paris with Maddy.

Quedubon, a new bistro in the 19th arrondissement, offers outstanding contemporary takes on traditional dishes. They have an enormous wine list with glasses and bottles from small French producers. 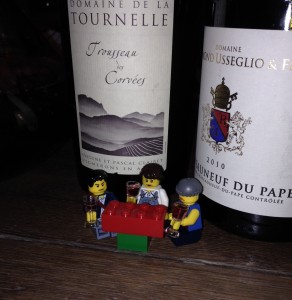 Garnier is famed for the oysters, which are absolutely fresh and delicious. The other dishes range from good to mediocre, and the service when we were there was the worst I have ever encountered in a Paris restaurant.

L’Atelier de Joel Robuchon remains one of the outstanding restaurants in Paris. Robuchon was the star chef of the late 70s and 80s and he remains innovative while consistently delivering the highest quality. Both a lengthy set menu (which takes 3+ hours to eat) and a la carte dishes are available. While expensive, his prices are less than other less talented chefs in Paris, New York and other cities.

When I was searching online for the links for these restaurants, I saw the crowdsourced reviews on sites such as Yelp and TripAdvisor. In several cases, Richard’s opinions and those of the “crowd” differed quite a bit. According to Yelp, De Kas has declined in recent years. We did not find that to be the case. Quedubon, a small, out-of-the-way place with a narrow range of dishes, did not have much love on Yelp or TripAdvisor. However, Richard prefers restaurants with limited offerings done well to a wide menu of mediocre dishes, which was the case at the crowd-favored Garnier. Even though Quedubon’s limited menu was heavy on the meat and I don’t eat meat for health reasons, I agree with Richard and appreciated this friendly neighborhood restaurant for its warm atmosphere and the quality of its specialty dishes. Sometime crowds can be wrong, especially if the crowd is used to one sort of restaurant experience (large menu, fancy surroundings) and the reviewed restaurant is very different from that.