Yesterday, I took a Long Island Railroad train to the end of the line — Huntington — to attend my very first nErDcamp. It took a long time for me to figure out what nErDcamp was, and the reason for the strange capitalization, and another year or so to find my way to one, but better late than never!

nErDcamp is a free literacy conference started about 10 years ago in Michigan as an offshoot of Cloby Sharp’s Nerdy Book Club. The capital E and D refer to the EDcamp model, which is a participant-driven “unconference”  that fosters dialogue among equals rather than conference “experts” lecturing, along with copious PowerPoints, to attendees. No one is paid to present, and no one pays to attend. However, one has to be a published author, an educator (teacher or librarian), or student to attend. 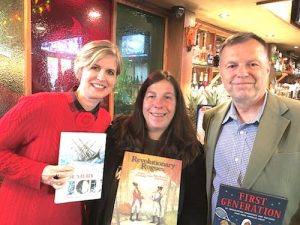 Fellow panelists Sandra Neil and Rich Wallace, and sandwiched in between, my friend Selene Castrovilla at the post-nErDcamp reception.

The focus of the nErDcampLI (Long Island) that I attended was K-8 literacy, which is typical of nErDcamps, though some also include high school. Held at James H. Boyd Intermediate School in Huntington, it included four hour-long sessions, one 30-minute mini-session, lunch, and a book fair open to the public at the end. When I signed up, Anne O’Brien Carelli, author of the middle grade novel Skylark & Wallcreeper, asked me to be part of a session on “Creating Compassion Through Children’s Books” in the afternoon. I also stumbled onto a morning session titled “Giving Yourself Permission to Find Your Voice: A Discussion for the Aspiring Author.”

The “Creating Compassion” panel turned out to be a more traditional panel in which authors Carelli, Laurie Morrison, Melissa Sarno, Ann Braden, Sandra Neil and Rich Wallace, and I discussed how our books addressed this topic of increasing importance at a time in which official cruelty has become the norm. In her introduction, Carelli distinguished between empathy and compassion. Pointing out the difficulty of fostering genuine empathy and the importance of putting caring feelings into action, she called on teachers to use literature to cultivate compassion instead. While I still believe that books can help readers understand other’s perspective, the action component is crucial, and I talked about the distinction in the context of Rogue, as Kiara stops seeing Chad principally as the object of her own desire to have a friend. As she comes to understand that he and his brother need help, she reaches out to the adults in her life to get him that help. In doing so, she goes beyond empathy to show compassion. 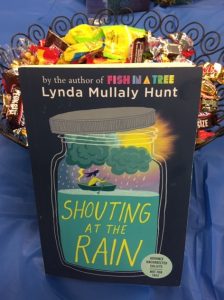 Along with the sessions, I got to see other writer colleagues, including Lynda Mullaly Hunt, whose ARC of her forthcoming book was a sweet treat.

The other panel in which I participated, “Giving Yourself Permission…” seemed more along the lines of the EDcamp model in that its organizers, author/teachers Denis Markell and Gregory Sewell, asked the published authors in the audience to talk about their journey to publication and how they found time to write with full-time jobs and/or parenting responsibilities. After nine of us offered our perspectives, participants interacted one-on-one or in small groups, asking questions of each other. I spoke about how my writing for young people led to my becoming a translator, so in the interactive part of the session, I spoke with a half dozen teachers and librarians who wanted to know more about international literature in translation and how they could become translators. I found out that several of them are fluent in Italian — for one English language arts teacher, Italian was her first language. I was impressed! Two of the teachers wanted to translate poetry from Italian to English, which I think is a great way to start because poems are shorter than full-length novels, and rights often easier to obtain if one wants to submit the translations to a literary journal. Another wanted to translate children’s books, and I mentioned the Geronimo Stilton series and the role of the “Americanizer,” which she enjoyed hearing about because the series is a favorite of her students. I also suggested that she join ALTA for the information, networking, and mentorship opportunities. I came onto this session completely by accident, and I’m so glad I did, because its organizers captured the potential of the model and provided a useful handout of questions for the aspiring author as well as inspirational quotes from Jane Yolen. If you couldn’t attend this valuable session, Sewell has a great website for more information and inspiration.

Thank you to Kristen Picone, JoEllen McCarthy, and Ali McDermott, the organizers of this year’s nErDcampLI, and all the participants and panelists who made this day one to remember!