Having summarized the ups and downs of my writing in 2017 (and after doing so, realized all that I’d missed, such as the heavily read series on “Working While Autistic”), I’m now turning to my New Year’s resolution. It’s well-known that I don’t have a great record of following through on my annual resolutions, which I can count in the gym memberships never taken out, the jobs not applied for, and the lottery tickets unbought. (Okay, winning the lottery doesn’t count because it depends on luck and not my own effort, but traditional publishing also seems that way at times.) 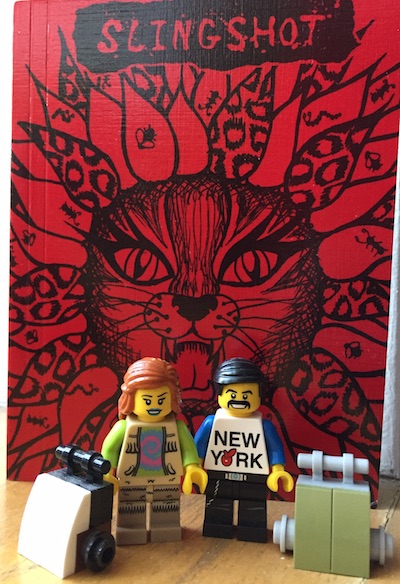 So for the purpose of having a journey to follow in the coming year with its outcome uncertain, I’m pledging for this year’s resolution to self-publish my first book in the internet age.

I’m calling it my first book in the internet age because I did, in fact, self-publish a YA novel many years ago. In 1986 and as a result of what I saw as a hard shift to fluffy, apolitical books for teens during the Reagan Administration, I founded a press to publish more challenging fare. The imprint, Stamp Out Sheep Press, brought out four books before my family had to make an unexpected cross-country move that forced me to shutter the imprint. (Big problem with one-person small presses — often life gets in the way.) One of those books was my own novel, Hiding Places, a reverse Horatio Alger, riches-to-rags story of a teenage runaway in New York City’s East Village, where I happen to live currently. The book received respectful reviews from major trade journals, a nomination for ALA/YALSA’s Best Books for Young Adults list (a coveted list that I would eventually make with Gringolandia), and a spot on the New York Public Library’s Books for the Teen Age list along with Pat Costa Viglucci’s Cassandra Robbins, Esq., the first novel published by Stamp Out Sheep Press. These two books, along with Cynthia K. Lukas’s Center Stage Summer and Robert Hawks’s The Twenty-Six Minutes, about teens involved in opposing nuclear power and nuclear weapons respectively, were early works in the movement for more inclusive stories, and stories about environmental and social justice issues.

These books received a lot of support at a time when few people self-published or started small presses. At the same time, I had to deal with a lot of skepticism from writer colleagues who often didn’t see me as a real colleague because I had published my own book. Even when Gringolandia came out, I had to convince too many people that Curbstone Press was a venerable nonprofit literary publisher and not the made-up imprint of a self-published author.

Maybe I began to care too much what other people thought of me over the years. Perhaps the accolades for Gringolandia and the Big 5 release of Rogue spoiled me, but I came to think it would be better for my writing peers to see me as unpublished and aspiring rather than amateurish and impatient. And so the manuscripts piled up, as did my ideas for books I’d never write because there wasn’t a mainstream market for them.

And that’s when I turned to this blog. It’s now more than five years old, with 330 essays as of today — mine and those of the occasional guest blogger. My husband, the principal guest blogger, has some of the most popular pieces in the form of restaurant reviews in Lisbon, elsewhere in Portugal, and other places where we’ve traveled. I’ve seen people walking around Lisbon with printouts of his reviews. Other Portugal-related articles have drawn even more traffic.

Nowadays, there are multiple ways of self-publishing and multiple reasons to do so. And so — drum roll! — my plan this summer is to publish an ebook of the most popular and useful blog articles related to travel to Portugal, along with a small section of the book for people who fall in love with the country and want to live there on a permanent or semi-permanent basis as my husband and I do. No need for a fixed address to publish an ebook — the reason I had to close my old press. No huge initial investment for a book that’s never going to come out in print. In fact, there’s no reason to bring it out in print. The whole idea of the ebook is someone can bring it on their trip at no extra weight, and it will contain all the information about restaurants, car rentals, museums, neighborhoods, and more without having to consume expensive online data in another country. In fact, the cost of the ebook — I expect it to be $2.99 — is about what it costs to purchase another block of data if the data cap is exceeded. And no need to deal with potential colleagues who may turn up their noses at my self-publishing venture. If they ever find themselves in Portugal, they will come to appreciate my work, as several have done already. (I plan to hit them up for blurbs.)

To fulfill this resolution, I will need to select the articles, update some pieces when my husband and I are in Portugal this spring, and write introductions. I will also need to hire a cover designer and formatter and a copyeditor and proofreader. I don’t want to contribute to the stigma of sloppy editing and unprofessional covers and layout that self-publishers face. I recognize that any book I bring out not only reflects on me but also helps determine the way that anyone else who goes it alone is treated.