For the past six years, I have served as the assistant host of “Los Vientos del Pueblo,” a bilingual program of Latin American and Spanish music, poetry, and history that airs every Sunday on WRPI-FM from 2-6 pm Eastern Time. But this past spring, the RPI students in charge of the radio station changed their policy to allow additional community members to host their own shows. As a result, I am now one of four rotating show hosts for “Mostly Folk,” the folk-music program that airs from 6-8 pm on Sundays.

My joining “Mostly Folk” is a liaison of convenience, as I’m not as plugged into the local folk scene as the other hosts. In fact, I’m not really part of the scene at all, as my interest is more in roots music from around the world. However, the show needed another person, and I wanted to play a wider range of music that Mario and I play on “Los Vientos del Pueblo” (although I also play many of the artists and songs we feature there as well). 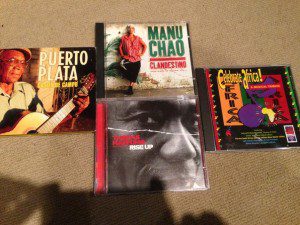 I began hosting my “Mostly Folk World Tour” in June, and today was my second time. I was a lot less nervous and a lot better prepared, and for the first time, I got fan calls today. Three people called in my two hours to tell me how much they liked the show and to ask for more information about my playlist. Since fans only encourage me, I’ve decided to list my songs here so people can look for them. This way, people will have the correct spelling, as most of the songs are not in English. I’ve listed the artist, the song, the album where I found the song, the nationality of the performer, and the language of the song.

As this program is a “world tour,” I organized it by locale. Our first stop was southern Louisiana:

We then took off for the Caribbean, with our first stop Haiti, to highlight the cultural interchange between this Caribbean nation and people of African descent who lived on the Gulf Coast:

From there, we visited various countries in southern and West Africa:

I finally returned to the United States with three songs about race in the context of the killing of Trayvon Martin and the acquittal of his assailant several weeks ago. I noted that several of the Caribbean and African musicians addressed racial and ethnic conflict in their work as well: