Welcome to the second post in the LEGOctober series! Here I will discuss what the Lego minifig can show us about character development. I would also like to thank Cynthia Leitich-Smith, who this week featured my Lego book launch on her awesome Cynsations blog. 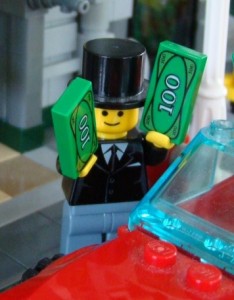 Rand is an old-school minifig with a plain smiley face

If you go to an official Lego Store or Legoland, you can make your own set of three minifigures (aka minifigs) out of tubs of heads, torsos, legs, hair, and implements. The past ten years or so have seen a huge increase in the expressions of the minifigs, from the classic smiley face to wide smiles, frowns, screams (of joy and/or terror), frowns, and a sort of crooked expression that conveys existential angst. You may even find two-faced minifigs.

When I make DIY minifigs, I typically keep their clothing and expressions constant as I arrange them into scenes and create my story panels. Most Lego enthusiasts don’t, but for me the “rule” spurs creativity. It’s the same kind of structure that a poet accepts when choosing iambic pentameter, or a novelist when writing from a single character’s point of view. The rule, the structure, makes sense. Iambic pentameter gives a poem a certain rhythm and sound. Restricting the point of view tells the reader whose story this is and builds suspense as the main character tries to discover the things he or she doesn’t yet know, but others may know. 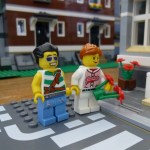 Elvis is cool, and Fiona is happy-go-lucky, an attitude that will be tested when she elopes with Elvis and her parents kick her out 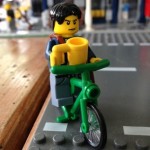 Patricio has a troubled past and a dark view of the world. Will he ever be happy? 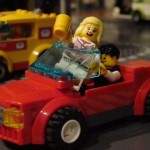 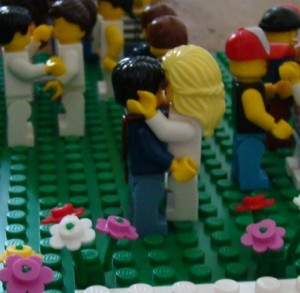 Patricio shares a tender moment with Karlijn, but his happiness is short-lived

For me, keeping a minifig’s clothing and expression constant allows viewers to recognize that character throughout the story. They show concretely who he or she is. The expression represents a character’s personality. Some are optimistic and happy by nature. Others are timid. Still others are morose, angst-filled, or quick to anger. Personalities don’t change much in a story — they’re the framework that determines a character’s actions, interactions with others, and how he or she will grow and change.

The challenge for the writer is keeping the character’s actions and interactions consistent with the core personality, while allowing room for complexity, growth, and change. Even the happiest, most optimistic person hits a rough patch. How does he or she deal with it? What if that solution fails — and the next one too? On the other hand, will the angst-ridden Patricio ever find happiness? 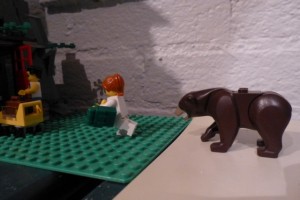 Help! A bear is chasing Fiona. Where’s her smile now?

When I create my Lego scenes, I arrange the minifigs to allow for this complexity. I can turn the head away so that the expression is not visible to the camera. I can raise a minifig’s arms, use objects to hide or alter the expression, or put another minifig in the way. Doing this highlights the fact that personality comes out through action, but events — actions by oneself or others — have the potential of altering one’s desires, beliefs, and emotional state. Change and growth occur through an accumulation of actions and interactions, but they do so within a range determined by the character’s basic personality. 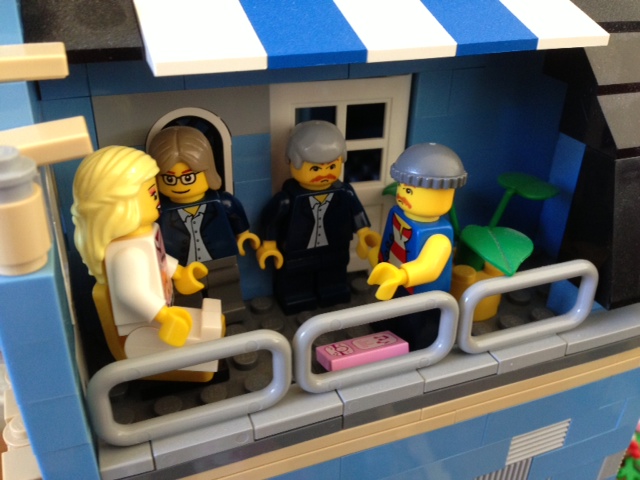 Karlijn’s shouts of joy turn to shouts of protest when her father, aunt, and uncle send her away to straighten her out