This coming Tuesday, January 7, is launch day for a picture book I translated from Brazilian Portuguese, The President of the Jungle, but due to my recent move and mail forwarding mishaps, I don’t have any finished copies to show off. Instead, I have what I promised in my New Year’s Resolution post last week — more Lego photos. The Creator Expert Bookshop (set 10270) launched on New Year’s Day, and an hour after the Lego Store in Flatiron opened, I was there, buying the next to last box on the shelf. I hope they had more stock in the basement. 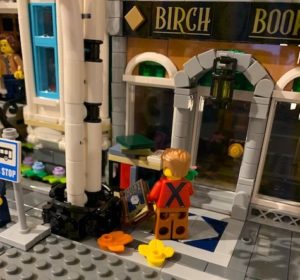 Charming Bookshop details include a copy of “Moby Brick” and an outdoor sale table.

For a writer as well as a Lego fanatic, the Bookshop is an essential purchase. In fact, many writers I know who’ve never bought Lego before are buying this building set. Note that they call it the “Creator Expert” (the new name for the Modular series), implying that one should be an expert builder before taking on this project. While I’m offering my services to anyone who’s stumped or wants the bookshop and townhouse but doesn’t want to take the time to build it, this particular set is one of the easier modulars to build. It comes as two separate buildings, with four groups of bags for each building (eight in total) and clear, well-organized instructions. If you’re a new builder taking on the challenge, I suggest sorting all the pieces for each group first; the time you take on the front end will save you from hunting for the right piece later. 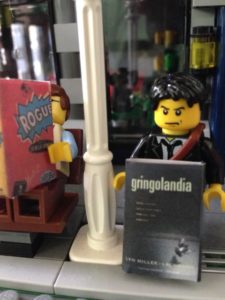 I’ve made Lego versions of my books in the past and plan to do it again.

The Bookshop set, like all of the recent modulars, features charming interior as well as exterior details. I was a little disappointed in the paucity of bookshelves and limited stock of Birch Books, but once you’ve been bitten by the Lego building bug, you may decide to create your own bookshelves with books and install them on the balcony. The set has a copy of the classic Moby Brick, but you can make custom books, as I’ve done with some of mine. Each floor is removable, and a bonus of this set is that the top floor comes off in two pieces to show off the interior details and to enhance the play value. 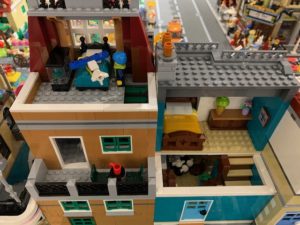 Each of the two buildings in the set has a detailed bedroom and removable walls.

Because my Bookshop was  incorporated into a street in Little Brick Township, I decided to modify the original set by placing the townhouse to the left of the store instead of the right. This also required moving the lamppost to the opposite side of the townhouse’s baseplate so it wouldn’t push up against the birch tree, a unique arboreal addition to the modular series. I did this because the brick color of the store was too similar to that of the 2017 Assembly Square set and I wanted more separation between the two. 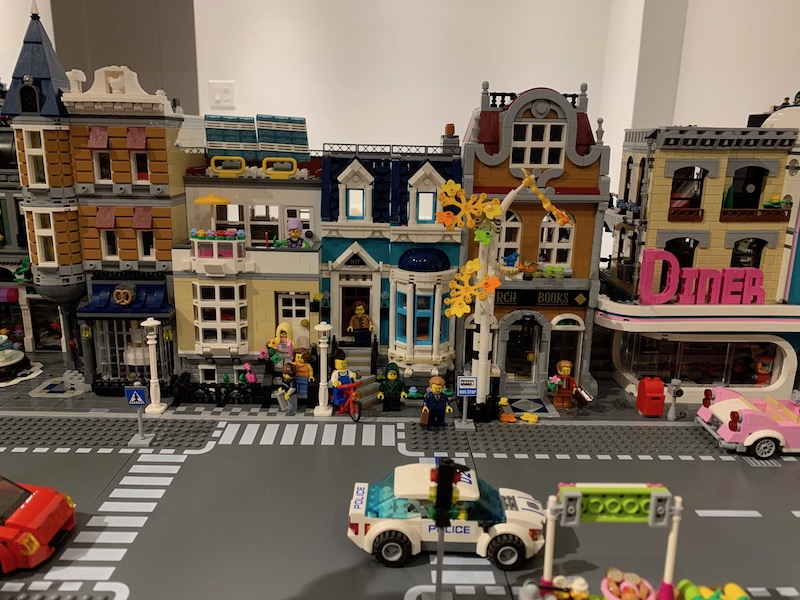 The modified Bookshop in my town.

Reversing the two buildings placed the lower-profile building, the townhouse (which I call the 107 Townhouse to distinguish it from the townhouse in the Pet Shop set and my two MOC, or original, townhouses), next to my Solar Townhouse MOC, where it wouldn’t block the sun. I still had to boost the solar panels by one level of bricks though. 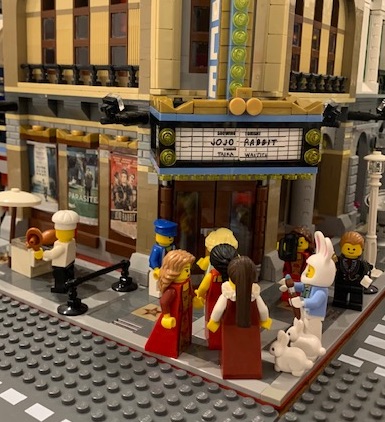 In all, I’m pleased with my new Bookshop and recommend it especially to more literary folks and those looking for a serious but not overly challenging build. And in devoting my holiday to Lego building, I haven’t forgotten other areas of Little Brick Township. The canal running through town now has three houseboats docked next to the road — two MOCs and the Lego Houseboat that I ended up buying in order to hit the break point for a giveaway. And my Palace Cinema marquee, which hadn’t been updated in years, has a new feature presentation as well as upcoming attractions. The premiere for Jojo Rabbit has some fitting celebrities in attendance.

My three canal boats and a driver paused for Pizza Rat and friends.

If anyone needs help with their Bookshop build, please let me know. I look forward to posting more scenes from my town in the months to come!