On the night we moved, nearly two weeks ago, we stopped in at our building’s holiday party. One of our new neighbors mentioned friends of hers who managed to unpack and host a dinner party a week after their big move. I’m proud to say that Richard and I could have hosted a dinner party a week later. All of our 79 boxes are unpacked except for the one holding pictures waiting to be hung on our walls. Those unpacked boxes include three holding my Lego Winter Village that I never opened in the five years we lived on East Houston Street because I had no room to put them. Winter Village out of its boxes for the first time in 5 years.

The Winter Village buildings and people now occupy two lower shelves of four green shelves that held other things in our old apartment but have now been reunited to create a whole lot of extra space for Little Brick Township to grow. On the bottom shelves below Winter Village, I’m planning to move my train station and to build a subway underneath the table that holds my town as soon as I find or build a train set I like. 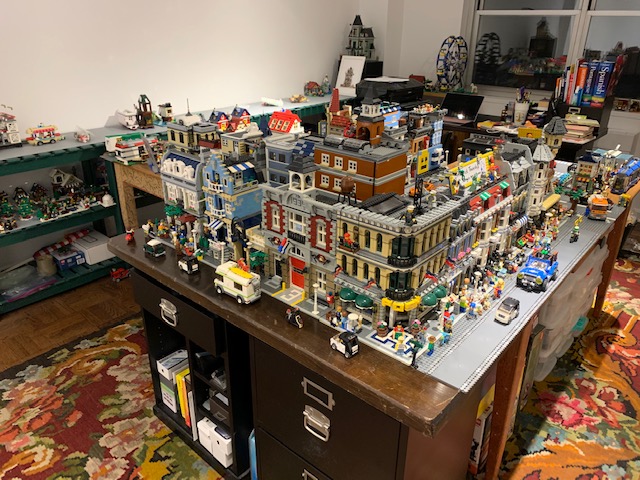 The left side of Little Brick Township with Winter Village below. The right side of Little Brick Township, showing construction vehicles for the new garage to come.

On the main table, I’ve arranged the larger buildings in the same configuration I had them in the old apartment, though that will change as new buildings join the town. Right now, I have construction vehicles in the spots where I plan to place new buildings. 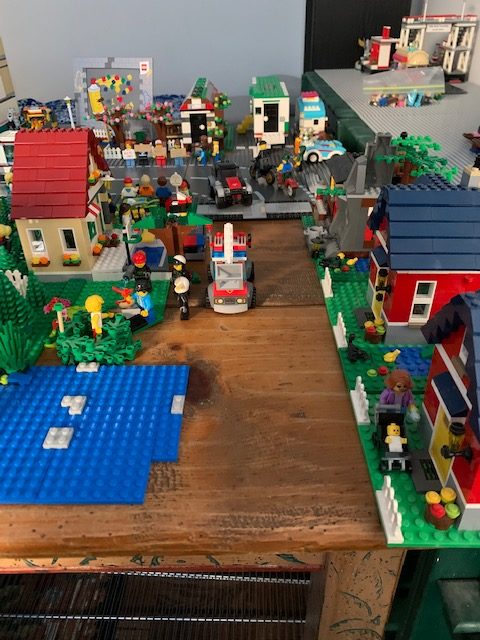 A new suburban street with the town pond.

I also celebrated the unpacking of all my Lego boxes by building a new suburban house from a kit and an Infinity Pool MOC (original construction) for an existing house. The new house joins some of my existing smaller houses on a new street that I’ve made, one that borders a small lake. After the new year, I’m planning to build a bigger lake with a beachfront to accommodate my MOC houseboats and random water craft. It’s so exciting to have all this new space for my town, and all those urban planning classes I took in college and graduate school are coming in handy. Back in my early twenties, I almost became a historian specializing in the history of urban planning. A road not taken, in part because of my inability to navigate academic politics and in part because I found the research kind of boring. I’ve maintained my interest as a fan, however, and on some level, it’s probably contributed to my appreciation of well-drawn settings in fiction and my attention to setting in my own books. 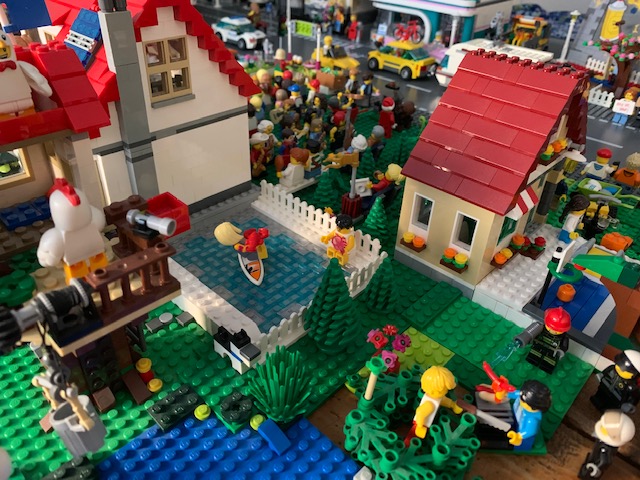 The new MOC Infinity Pool already has its fans.

Over the years Richard and I have moved six times — from New Haven, Connecticut to Brooklyn; from Brooklyn to Madison, Wisconsin (where much of Gringolandia is set); from Madison to the Albany, New York suburb of Clifton Park; from Clifton Park into the City of Albany; from Albany to our previous apartment on East Houston Street in Manhattan; and from there to an apartment 14 blocks to the north and west. We bought this new place, which makes it our “forever home,” and that means Little Brick Township can be completely unpacked and expanded without us having to worry about our lease running out and having to move it on short notice and in a brief space of time. While that wasn’t our principal motivation for buying a place and moving — our landlord was hoping we’d stay in that apartment forever — the stability and extra space will make it possible for Little Brick Township and its Bricksters to grow and prosper. None of this would have been possible, however, without the support of my mother and Richard’s Aunt Ruth. We and all the Bricksters thank you! 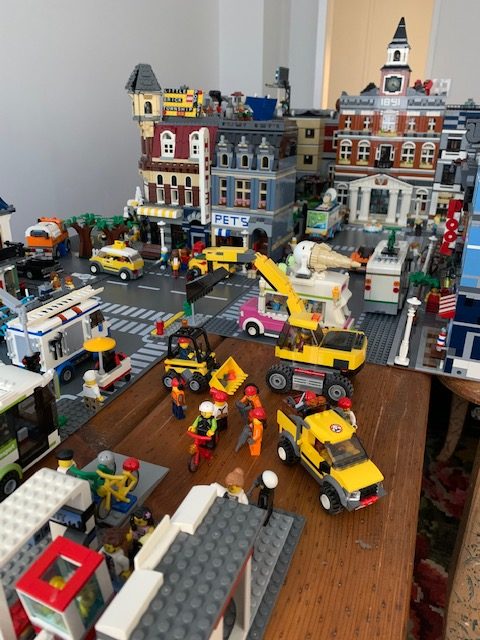 The site of the garage, with Town Hall in the background.

On our many trips into the building in the process of renovating and moving, I noticed parents and children bringing Lego shopping bags and boxes inside. The Lego Flatiron store is not far from here, and I suspect many Lego fans — children and adults — live here. I’ve already received requests for tours from the building staff, and I expect to host visitors young and older to Little Brick Township in the coming months and years. I also hope to give virtual tours to my sixth grade classroom in the #kidsneedmentors program as well as to other classes that are reading the books I’ve written or translated. In the meantime, check out these pictures and enjoy the holidays that you and your family celebrate! 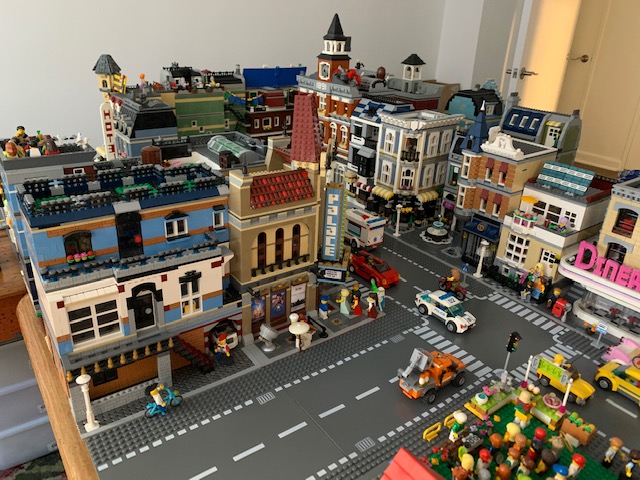 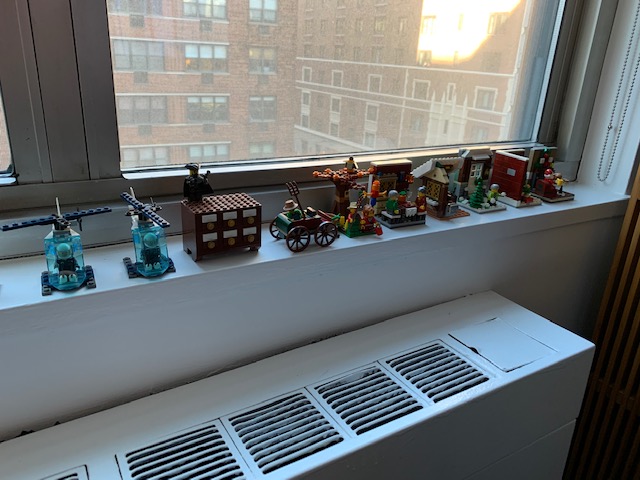 Vignettes on the window sill.