Little Brick Township Is Back…

…and better than ever! 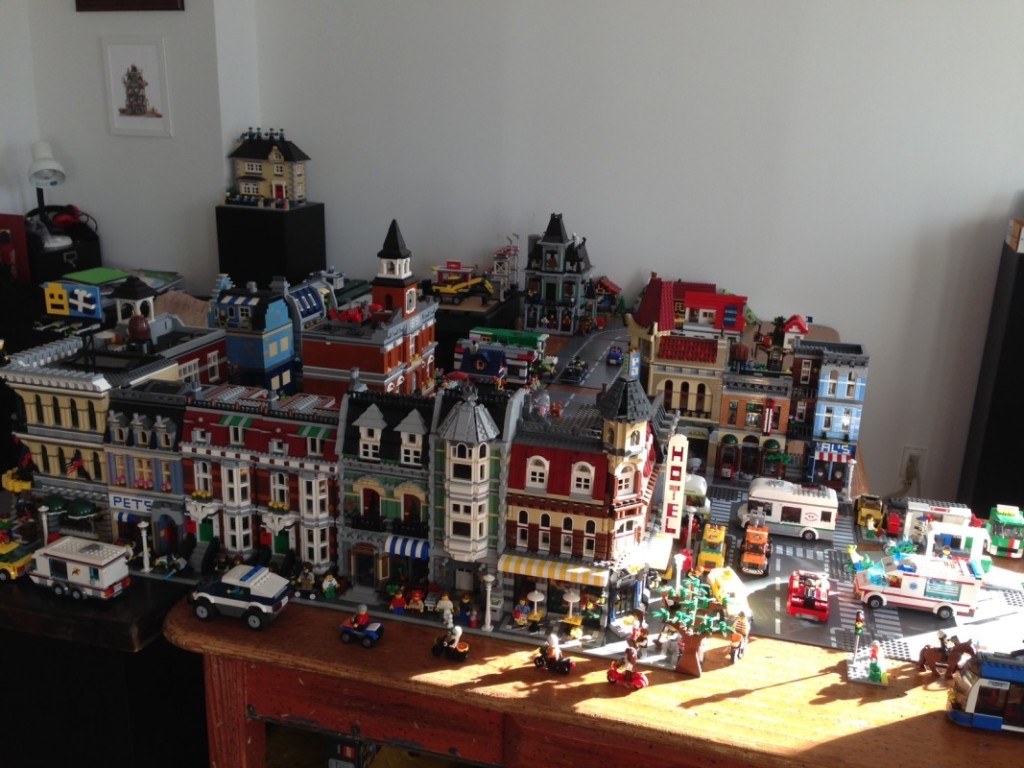 The front of Little Brick Township in its new home.

After spending weeks wrapping and packing Little Brick Township for the big move from Albany to New York City, it took surprisingly little time for me to set up the buildings and roads in their new home. Because the new apartment is a loft with one huge living room/dining room/two offices/studio space, I was able to combine two tables and two file cabinets to make a much larger space for the township to spread out. 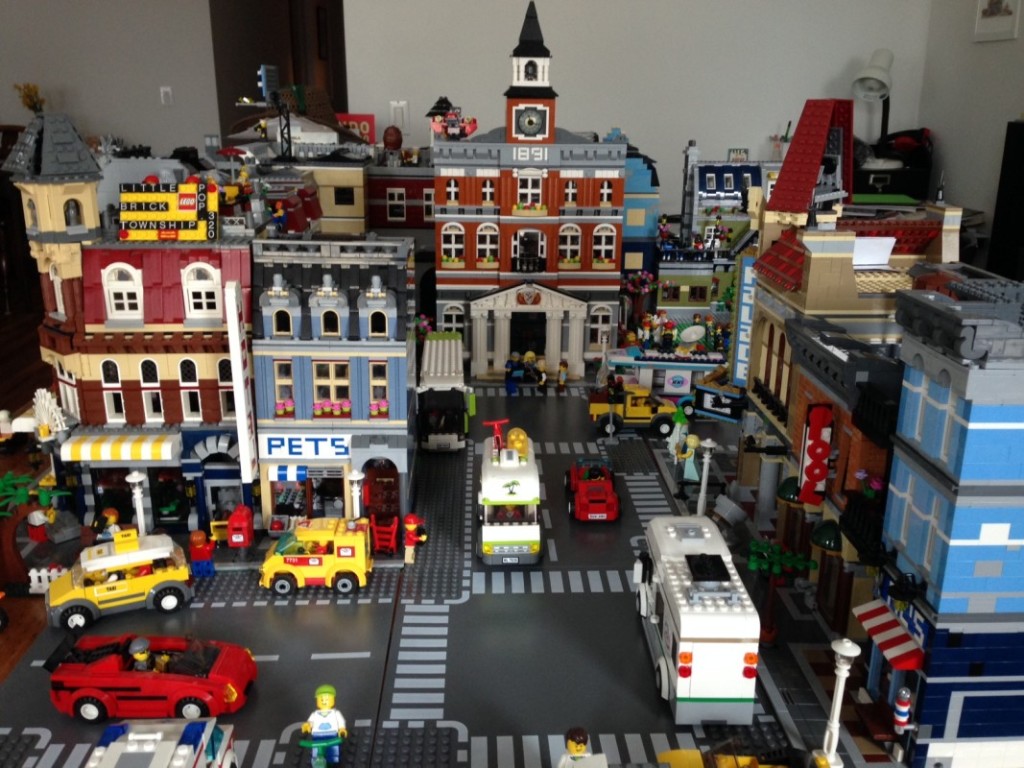 Side view of Little Brick Township from the Transit Center.

On the other hand, the one unified space means I can’t display more than one theme at a time, so my entire Winter Village set-up is for sale.

Right away, I added two new road plates and the new modular Detective Office. The core of the town remains the same, but the Detective Office and the Palace Cinema are now across the street, along with the Transit Center. The Haunted Mansion (which has served in various incarnations as an Adult Entertainment Center, a Wellness Center, and a Public Library) used to be at the edge of town with the Palace Cinema, but the Cinema now features more family friendly fare (as soon as I get “Gomorra” off the marquee), and the Haunted Mansion is now next to the train station. Beyond these two buildings are the rural houses and campsites that one day I hope to establish as a writing retreat. 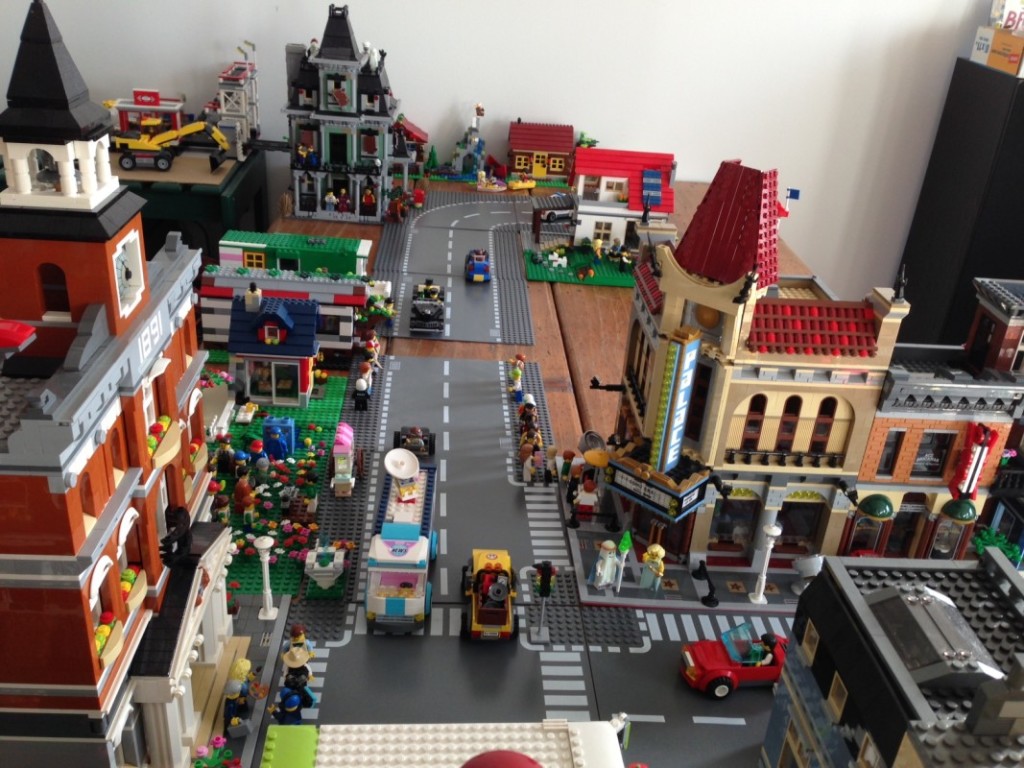 Tomorrow, I’m showing pictures of Little Brick Township to the students at Hommocks Middle School in Mamaroneck, New York. If they’re anything like my seventh graders in Schenectady, I expect a lot of Lego-related questions. This literal exercise in world-building is a great demonstration of the kind of thought that goes into the writing of a novel, because even a contemporary realistic novel takes place within a world that has a unique appearance and set of rules that need to affect, and be affected by, the emotions, relationships, and actions of the characters. 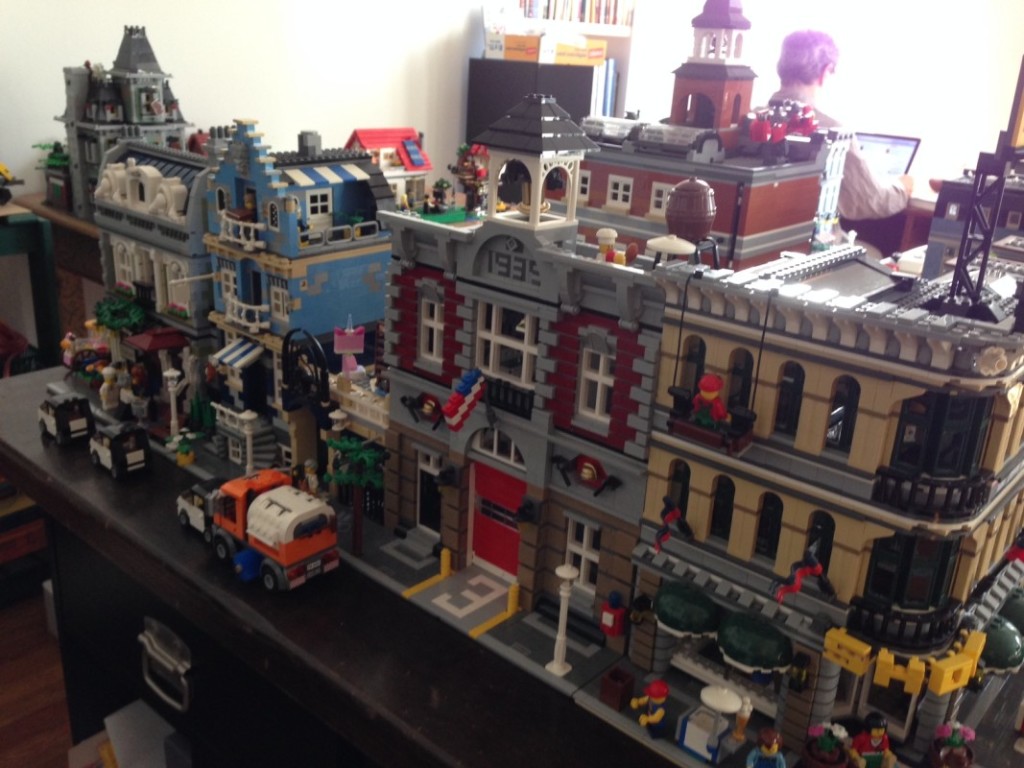 The back side of Little Brick Township.

Little Brick Township is one of several Lego municipalities on Instagram. Some of the builders highlight their original creations, or MOCs, and may have channels on YouTube when they describe their building techniques and offer tours of their Lego towns. The Lego Neighborhood Book, by Brian and Jason Lyles, is an excellent introduction for those of you who want to focus on creating different kinds of buildings for your town. I’ve bought a couple of Creator Bike Shop sets, with the goal of using the parts to build my first MOC townhouse this summer, when I’ll be back from Portugal and, with Surviving Santiago launched, hopefully have more time to develop my skills as a MOC builder. 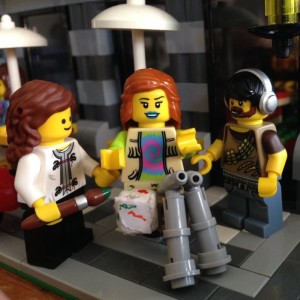 Signing my sig fig’s cast after her return from Brickland and her accident there.

However, I consider myself more of a storyteller who uses my town as the backdrop for my characters, minifigures, to act out their lives. There are several of us who do this on Instagram, and we’ve started to incorporate each other’s “sig figs,” or signature figures, into our stories. One was of telling who the storytellers are on Instagram is that we name our towns. Besides Little Brick Township, you can find Brickland, Wackyville, and Studsboro, among others. Each town has its own character as well. @thecourtous’s Brickland, for instance, can be a dark, dangerous place, where storms blow up and intrigues quickly turn deadly (RIP Mrs. Scratchenpost). A runaway car left my sig fig with a broken leg, and a pregnant sig fig lost her baby in the same crash. 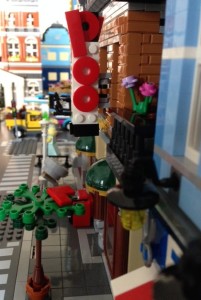 Don’t you hate it when the letters fall off your sign?

I like to find the drama, humor, and irony in ordinary life in Little Brick Township. Readers of this blog have met the corrupt politicians and followed the breakup of baggage-laden Pubrickster Prize-winning journalist Patricio and his girlfriend, Karlijn.

Sometimes, though, I revel in the silly — which also turns out to be quite popular on Instagram. For instance, the Detective Office build has a large sign for a pool hall. And you know, sometimes signs lose their letters. And, as one of my Instagram commenters pointed out, maybe the building owner should have consulted Angie’s List before hiring a contractor to fix it. This picture won the Picture of the Day from the @ToyHumor Instagram page.

I hope you enjoy Little Brick Township in its new home as much as I do! 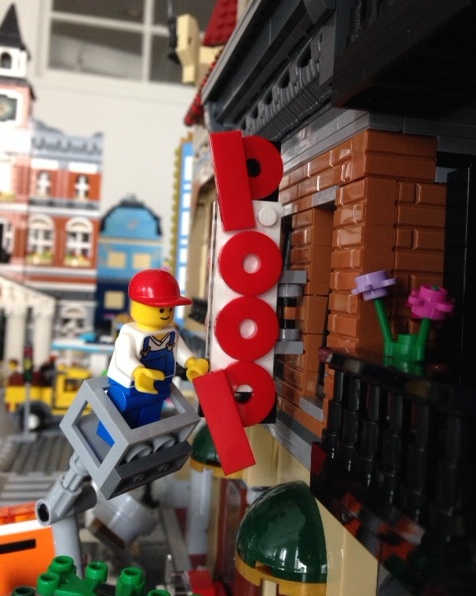 Don’t you hate it when the guy you hire to fix the problem only makes it worse?