Two years ago, I wrote a piece titled “Lisbon’s Hipster Neighborhoods of 2017,” which has turned out to be one of the most popular of my blog posts. However, it is no longer 2017, and as a service to you, dear readers, I’ve revisited all those neighborhoods to make sure they still qualify as cool and off the beaten track. I’ve also checked to see if the bars, restaurants, museums, and shops are still in business and if new ones have opened. This year I enlisted the help of my son and daughter-in-law, who visited at the end of May and whose personal experience of hipness is far more extensive than mine. 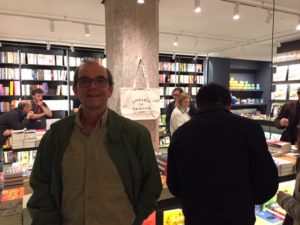 A partner of the Brazilian bookstore Livraria da Travessa at its soft opening in the Principe Real neighborhood of Lisbon.

In addition, I’ve become aware of a growing number of young people who’ve chosen to make Portugal their home, at least for a year or two. Many of these new arrivals are British citizens looking to establish EU residency post-Brexit. Others are leaving places where the freedoms they enjoyed are now in jeopardy because of the ascendance of right-wing populism in their home countries. This is especially true of young people in Brazil whose queerness has made them a target in a country where the newly-elected far-right president Jair Bolsonaro has expressed violent homophobic views. I’ve also read about, and met, progressive Israelis who feel increasingly alienated at home and are looking for a better life and more opportunities elsewhere. If they can prove family roots in Spain and Portugal before the Inquisition, they are also entitled to claim Portuguese nationality (citizenship). As a result of this migration into Portugal, I’ve added to my list of hipster neighborhoods another Lisbon neighborhood where digital nomads are increasingly finding a home.

Sculpture on a building in the Corpo Santo neighborhood.

In 2017, I proclaimed Corpo Santo, on the north side of the Avenida 24 de Julho across from Cais de Sodré, as the #1 destination. I stand by this assessment. While more bars and restaurants have opened in the neighborhood, it retains its pre-gentrification grittiness. The fate of ice cream shop Davvero, pictured in the 2017 roundup, offers an example. Two years ago, it occupied a corner in a partially-boarded-up building on the Praça de São Paulo. Last year, a sign announced that Davvero had closed that shop and moved to the suburbs, to the town of Oeiras that has become a home for prosperous Portuguese and expats. This year, Davvero has returned, across the street from its original location, which is now fully boarded-up and awaiting redevelopment (which may happen soon, or may never happen). And while one of our favorite restaurants in the area, Casa de Pasto, has closed, others have moved in, including one of the new wave of Middle Eastern restaurants and the Peruvian ceviche place Cantina Peruana that got its start inside the Bairro de Avillez. Rua Nova de Carvalho, site of Lisbon’s premier nightclubs, also features a cafe/bookstore busy day and night. 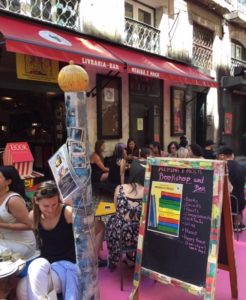 In the past two years, I’ve noticed that the nightlife in Corpo Santo to the south and Bairro Alto to the east has sucked out some of the action from the Santa Catarina-Bica neighborhood, which retains its residential character and picturesque miradouros, or overlooks. It’s a great place to stay, as we did in 2014, and the shopping is decent, but it’s not the hip destination it was in comparison to other areas.

Baixa and Chiado have definitely gone mainstream in much the same way as their neighbors to the east, Mouraria and Alfama. Expect hotels and guest houses, many in restored buildings, upscale clubs and restaurants, and places that offer “typical” Portuguese cuisine and fado performances. One happy addition to the eastern Baixa and lower Mouraria neighborhoods, east of Rossio Square, is the growing African community, leading to the opening of Mozambican restaurants and ones that combine east African cuisine with that of south and east Asia. 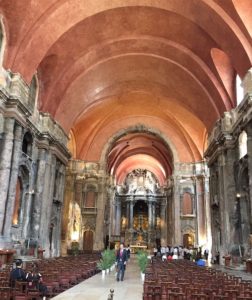 The historic São Domingos Church near Rossio Square. Outside is a monument to Jews executed during the Inquisition.

Close to the clubs in Bairro Alto — which continues to be a popular destination for locals, students, and visitors — is the neighborhood of Principe Real. It has long been our favorite neighborhood, ever since we lived there in 2012, and this year has seen the opening of new restaurants and a wonderful new bookstore, the first overseas outlet of the Rio de Janeiro-based chain Livraria da Travessa. Richard and I were fortunate to stumble into its soft opening and to see the wide variety of its offerings. One of the advantages of having a Brazilian-owned bookstore is that it makes available titles from Brazil that were difficult to acquire in Portugal in previous years. With a population of more than 240 million, Brazil represents a much larger market despite lower levels of literacy. With its location in Principe Real, Livraria da Travessa serves the growing expat/exile community from Brazil, many of whom have made this neighborhood their temporary or permanent home. I expect this bookstore to become a hub for literary and political exchange in the coming years and a really cool place to visit and shop.

In 2017 I gave a sort of honorable mention to the LX Factory, located under overpass to the 25th of April Bridge. Since then, this collection of factories and warehouses has expanded, with new stores, restaurants, performance spaces, and offices and co-working spaces. Weekends feature a lively outdoor market as well, where Richard was able to find (finally!) a pair of cork slippers that fit his strangely-shaped feet. At this point, I’d place the LX Factory in the top five despite its somewhat out of the way location. You will need a car or Uber (as of early 2019, Lyft hasn’t yet come to Portugal), especially at night when buses and the metro run less frequently or shut down altogether. 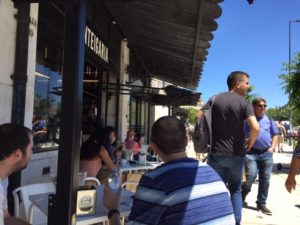 Pro tip: Manteigaria has great pastel de nata, but inside the Mercado da Ribeira, the lines are long. Step outside, and inside the shop the lines are short and there’s great outdoor seating on the avenue.

Both the LX Factory and the Corpo Santo area (especially near the overcrowded Mercado da Ribeira) have seen the opening of co-working spaces to attract entrepreneurs and digital nomads. Because it’s relatively inexpensive and enjoys good weather most of the year, Lisbon has become a magnet for young freelancers and tech and design startups. Many of the better funded ones are settling in what is now being called the Oeiras Valley, the suburban towns along the river between Lisbon and Cascais that include Oeiras and Carcavelos. But what if you’re a student or a young person just starting out, and you can’t even afford co-working spaces? There’s still a neighborhood in Lisbon for you, where the cafes offer free and speedy Wi-Fi and relatively inexpensive places to live and eat. 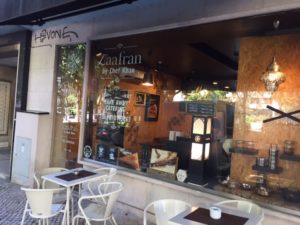 A huge plus for the Arroios neighborhood is the new take-out for Indian-Mozambican restaurant Zaafran, one of our favorites.

Around the Instituto Superior Técnico, Lisbon’s main engineering university, is the Arroios neighborhood. And while the Arroios metro station has been closed for more than a year (with no end in sight) for lengthening, it’s a short walk to the Alameda station, a transfer between two lines and the location of the university, or Saldanha, also a connecting station. Most of the housing in the area was built in the mid-twentieth century, but what it lacks in charm in comparison to, say, Principe Real it makes up for in lower rent and the excellent cafes that double as free co-working spaces. Check out the multi-level Choupana Cafe on Avenida de la República near the Saldanha metro, or The Coffee Library in Praça de Londres, near Alameda.

Lisbon is one of the few places in the world that’s both a great place to visit and a great place to live. And while residency laws are in flux throughout the EU, the country prides itself as a “nation of emigration and immigration,” making it one of the continent’s more welcoming places for people seeking new homes for the short or long term.