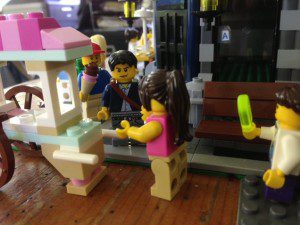 Poor Patricio! By the time he got to the front of the line, all the ice cream had sold out. Jerry Bijoux (with red cap) taunted him: “L’ultima gelato per me!”

With the new month and increased interest in my Lego stories on Instagram, I’ve decided to devote October’s blog posts to Little Brick Township and what I’ve learned about writing from working with those lovely little minifigures. Patricio, Karlijn, Elvis, Fiona, Mayor Slik, Lindsay, Jerry Bijoux, and the rest of the gang have some stories and surprises waiting.

In past months, I’ve featured some of these characters and their stories. For instance, “The Fix Is in at Little Brick Township” offers an overview of the town and how it has expanded over the years. “What Is Your Lego Cinema Showing?” gives tips on customizing modular builds. And “A Writer’s Advice to Lego Builders” is an example of the kind of advice I plan to give this month; that post talks about finding the center of your town, and your story. 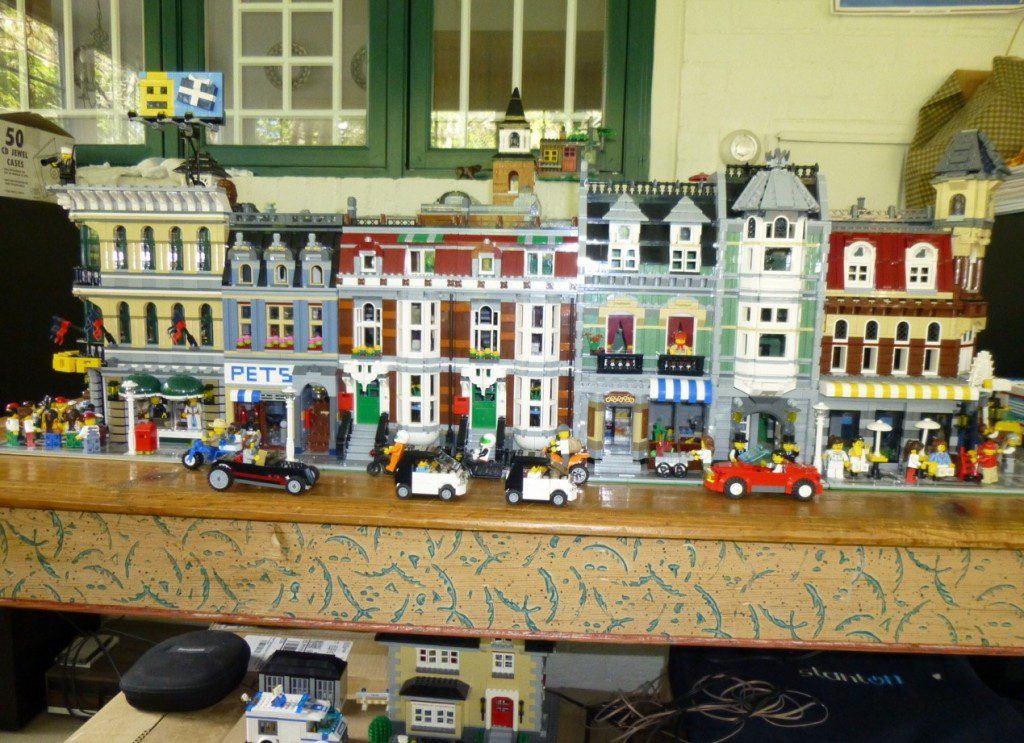 The main street of Little Brick Township, along with a glimpse of its dystopian underworld

I also have guest posts at other blogs that I’ve been told will appear this month. The brilliant and talented Christopher Cheng (who has his own minifig look-alike as the featured image of “Digital Book Creation and Marketing” — though the Lego musician character is in fact named Iván) asked me to write about my town for his blog. Cynthia Leitich Smith, the equally talented and very energetic (I don’t know how she does it all) creator of Cynsations will publish my account of my Lego book launch last spring, along with ideas for teachers to help their students with special needs to find and express their unique talents. 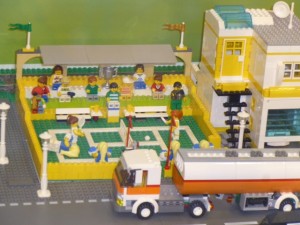 My Portuguese friends at PLUG made this cool tennis court!

The publisher’s blurb for Rogue states that the novel “celebrates everyone’s ability to discover and use whatever it is that makes them different.” My own fascination with Lego started in childhood, increased when my son was young and played with the Pirates and Castles, and has morphed into a complete and growing town now that my kids have left home and my job disappeared. Although it makes me “different” from other authors, there is, in fact, a thriving AFOL (Adult Fans of Lego) community, with many of them interested in how the brick and story go together. I’ve interacted with them on Instagram, and I met some of them personally when I lived in Portugal. Perhaps I can turn some of these Lego fans, adult and teen, into readers and writers. Perhaps I can turn some writers into fans of Lego. I look forward to trying!

Part 2 of the series is a piece on character development, “Minifigs: Character, Personality, and Action.”

Part 3, “Complicating the Minifig: Layered Narrative,” explores how a non-linear narrative can give characters depth while engaging the reader in the story.

Part 4, “Waylaid in Winter Village,” discusses setting, including the important of authentic details and consistency.

The series concludes with “Sparks Flew,” an examination of how to show rather than tell, and why showing is so important to the story.

There will be more posts on Lego and writing, but they won’t be in October, and they won’t be all at once. So check back for more on dialogue, point of view, misdirection, and other topics to come!