So far, I’ve talked about my efforts to learn Portuguese in two other posts, which is why this one is Part 3. At first, the class I signed up for was postponed due to lack of enrollment. Then, a couple of other people signed up, and we got the go-ahead. Although one of the students dropped out last week because of a work commitment, the two of us who remain are pushing ahead quickly, and now we have only four sessions left. Already we’ve learned basic vocabulary, articles and conjunctions, regular and irregular verbs in the present tense, and comparatives and superlatives. At the last session, we started the simple preterite, a very useful tense for me as a writer. At our next class I imagine we’ll learn the conjugation for the most common word in novels, “said.” The verb “to say” in Portuguese, by the way, is “dizer.” And it’s very irregular, as common words tend to be because they get beat up when people say and write them all the time.

I’m happy to be at the point in my language studies when I can get a bit creative. Language exercises can be boring. However, I’ve started to embellish the assignment, and as I do, questions arise that have more to do with writing than with grammar (although I have a bunch of those as well).

Yesterday’s homework involved writing a paragraph describing what a fictional Ana did last Saturday, and another of what she did on Sunday. The purpose of this was to practice the simple preterite. According to the instructions, we had to include a list of events that included, for Saturday:

got up at 10 am, took a shower, ate breakfast at 11 am, went shopping, read the newspaper, listened to music, dined out, went to the movies with friends, and returned home at midnight

slept until noon, ate brunch at a cafe, cleaned the house, wrote her friends, called her grandmother, stayed home in the evening, and went to bed early.

Ana sounded quite boring, so I decided to add a few things. For instance, when she went shopping, she bought a new umbrella because she left hers on the bus the day before. And when she read the newspaper, all the news was bad so she dropped the paper into the recycling bin and listened to music instead. She only listened to happy songs. Over dinner, she and her friend discussed fashion and celebrity scandals, and then they went to see “Amanhecer” (the “Twilight” finale “Breaking Dawn”). 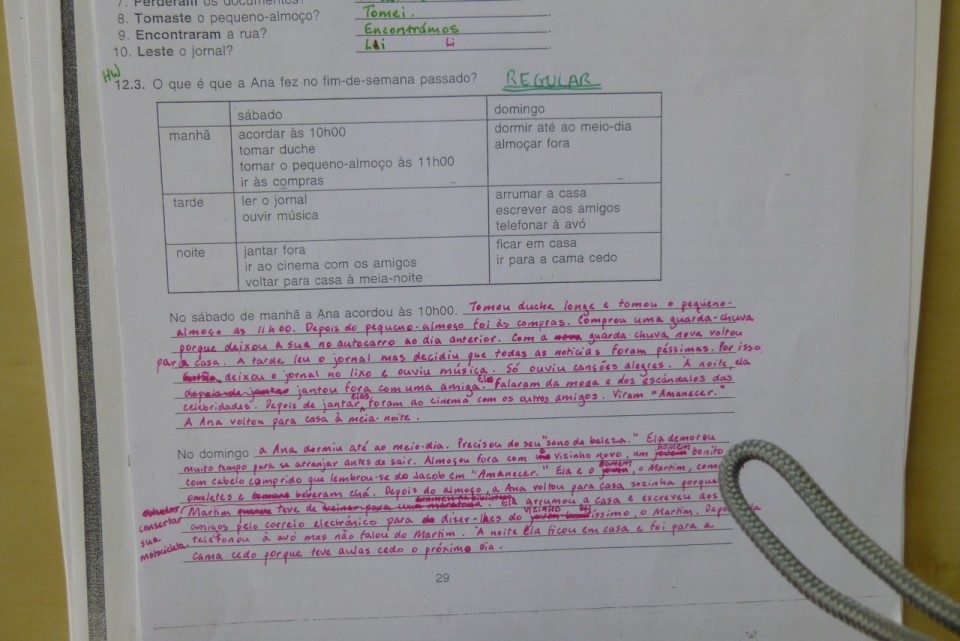 As you can see from the multiple scratch-outs, my problem occurred on Sunday, when she met her new neighbor, the handsome Martim (who reminded Ana of Jacob in “Amanhecer”) for brunch. While Ana cleaned her house afterward, Martim had to do something too. At first I had him training for a marathon, a popular sport here in Portugal. But it’s probably not a good idea to train for a marathon after brunch, even if you only drink tea rather than Bloody Marys. So then I had him go to study in the library. But later on, when Ana telephoned her grandmother, she didn’t tell her about Martim, even though she told all her friends. I think that if Martim were studious, Ana would be happy to tell her grandmother about him. So I had him fix up his motorcycle. But because that’s kind of a cliched “bad boy” activity (and didn’t Jacob work on his motorcycle in the “Twilight” movies?), I thought about having him go to the university to paint posters for a demonstration. I’ve seen a lot of young people making posters for demonstrations here, to protest government cutbacks in scholarships and big tuition hikes. And I figured the grandmother wouldn’t be too happy about Ana dating a protestor, unless she was one of the sweet little old ladies who I saw in front of the metro station last week handing out flyers for the Communist Party of Portugal.

The problem was, if Martim was so active in politics and Ana so ditzy (note the lost umbrellas) and so disengaged from current affairs that the news upset her and she only wanted to talk about fashion and celebrities, their relationship probably didn’t have much long-term potential. I know opposites sometimes attract, but did I want to put such an obstacle in front of them right away? Okay, I know I’m really over-thinking this, but this is the kind of thing writers think about, even when writing two paragraphs for a beginning language class.