Categories Menu
Home » Blog » It’s All Good! How You Can Create Diversity in Publishing

It’s All Good! How You Can Create Diversity in Publishing

Last week I wrote about Quill Shift, a new literary agency dedicated to increasing the presence of writers of color in traditional publishing. Since then, the discussion on the Cooperative Children’s Book Center list has continued. Several former publishing executives have pointed to disappointing sales as the reason for the relative absence of certain authors and subjects. Publishing is not a charity, they have argued, and books that appeal to the widest audience are the ones most likely to get published and to find support both within the company and in the marketplace.

While many of the teachers, librarians, and writers on the list have protested the cold calculation of capitalism, protests generally have little impact unless followed up by action. And barring the end of capitalism, the most effective action is one that builds on our collective purchasing power.

One of the participants in the CCBC discussion, Sarah Hamburg, made a list of action points that have been making their way through the blogosphere in recent days. Edi Campbell’s Crazy Quilts has done a great job of presenting this list, along with links to the resources themselves. I had originally intended to republish the list as well, but have instead decided to emphasize one aspect of it — our purchasing power and the importance of using that power to support the kinds of books, and businesses, we want to have. 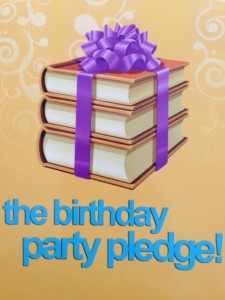 The #1 item on Sarah’s list was “actively buying books representing a diverse range of voices.” That begins with buying more books. Sarah mentioned the Birthday Party Pledge, the brainchild of author and activist Zetta Elliott, which encourages adults to buy books as birthday presents for the young people in their lives. This is especially important for young people of color and others who do not regularly see books about people who look like them or share their experiences. Those books do exist, and we should make an effort to find them. This way, we build a generation of readers, support the authors and publishers who create these books, and help bring multicultural books from the margins to the mainstream of publishing. 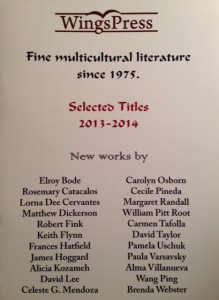 Wings Press is another small press that has published outstanding picture books by Latina/o authors and illustrators.

Sarah also talked about “the importance of smaller presses in making space for new voices.” One of the authors whose books were featured in the CCBC discussion was Tim Tingle, whose picture books and novels have been published by Cinco Puntos Press and RoadRunner Press. In the past, I have written about Farmers’ Markets and the Buy Local activism of my nearby independent bookseller, The Book House. While getting multicultural books into large, established publishing houses, with their superior marketing connections and connections to review outlets, is a laudable goal, activism through purchasing power should also focus on those publishers that are committed to nurturing diverse authors and producing high quality books. These small presses are in many ways like the local independent booksellers in that they work closely with their authors and with under-served schools and libraries, community centers, juvenile facilities, and other hard-to reach (or not instantly profitable) places to connect with existing readers and make new ones. 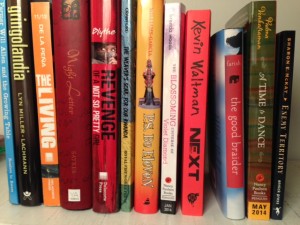 Multicultural children’s and young adult books from both small and large publishers share space on my shelf. They’re all good, and they all get along.

I titled this post “It’s All Good!” to challenge the notion that larger equals better, and that small presses constitute the “minor leagues” of publishing. By that same token, is your independent bookstore or food co-op inferior to the big-box store at the edge of your town? Certainly, a smaller publisher doesn’t have the range of books that a general publisher has, and the titles may be a little more expensive because of the economies of scale. But the quality is there, and you will often find a wider range of subjects, styles, and perspectives. Although Curbstone Press picked up my young adult crossover novel, Gringolandia, from an option they had as a result of publishing my adult novel, Dirt Cheap, I doubt that novel could have been published by a major publisher. It was a historical novel set in a small, faraway country, dealing with a tough subject (torture), and written from multiple points of view with an element of metafiction (commentary on the act of writing fiction itself). Gringolandia went on to achieve both critical success and impressive sales for a book published by a small non-profit press. I am proud of the book and grateful to the reviewers, teachers, librarians, and countless book buyers and readers who gave my small press title a chance.

And there are many more fresh and outstanding multicultural books published by small presses out there. If you give them a chance, you’re supporting alternative ways that authors of color and others out of the mainstream can get their work to readers. You’re also showing the large corporate publishers that there is a market for this kind of work. After the success of Gringolandia, I was able to sell Rogue to a major publisher. Benjamin Alire Sáenz took his next books to Simon & Schuster after the successes of Sammy and Juliana in Hollywood and Last Night I Sang to the Monster, both published by Cinco Puntos Press. Edi Campbell lists a number of multicultural small presses the Diversity Resources page of Crazy Quilts. I will be blogging soon about some that I saw at last week’s Associated Writing Programs (AWP) conference in Seattle.

If you’re a librarian, teacher, or publisher reading this, please check out Sarah’s full list of suggestions on Crazy Quilts and other sites. If you are a writer, a parent, or a general reader, take the Birthday Party Pledge, and keep in mind that the books you want may already be available from the dedicated and innovative folks at smaller presses.