Categories Menu
Home » Blog » Is Porto the Next Hipster Destination?

Is Porto the Next Hipster Destination? 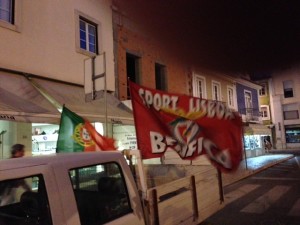 Flags and honking cars celebrate Benfica’s clinching the national championship, the 34th in the club’s history.

I arrived back in Lisbon tonight after a visit to friends who live outside of Geneva, and the city was gripped in football (aka soccer) fever. Local team Benfica had just clinched the national championship with a 0-0 draw in Guimarães. The fact that Benfica was heavily favored to clinch tonight did not diminish the enthusiasm of fans; rather, it gave everyone more time to plan their victory parties. When we arrived, signs in the Metro announced the closure of the station at Marques Pombal — one of the largest stations in the city and the site of a celebration that appears to have drawn about a hundred thousand fans. 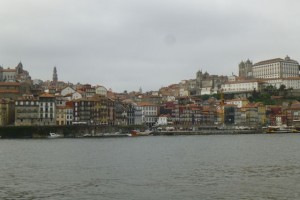 View of the Porto waterfront from Vila Nova de Gaia, in spring 2014.

Fortunately, I am safely indoors and not on the street with honking cars and drivers who have perhaps celebrated a little too much. And I’m thinking about my trip to Porto two weeks ago — the city from which the national title was snatched away tonight.

Porto, though, has other reasons to celebrate. After years as the impoverished second city of Portugal, it was chosen several years ago as a top tourist destination. It has a lovely new airport (which I saw on television tonight because the Benfica team flew from there to Lisbon after their victorious draw in Guimarães), and Europe’s discount airlines offer flights from numerous destinations. The once crumbling waterfront buildings now sport new façades, thriving ground-floor cafes, clubs, and boutiques, and upstairs tenants. According to our friends in Porto, young hipsters from Sweden have flocked to the city and opened restaurants and music clubs. Can young people from elsewhere in Europe, seeking better weather, cheaper housing, stunning views, and fast internet, be far behind? 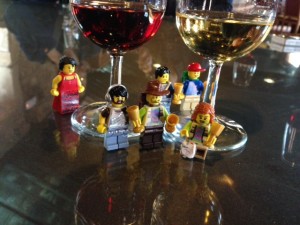 My Lego boozehounds enjoy their tour of the port wine caves.

In Porto, Richard and I visited old and new tourist sites. The port wine caves have been a staple of tourism for decades, and our third time in Porto was the charm for taking a tour. We found the visit informative, particularly in revealing the different types of port wine and how some become designated as “vintage.” We also had a chance to sample a white and a tawny port, which delighted our Lego tourists. 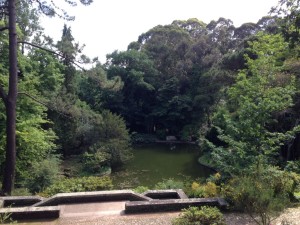 The gardens at the Serralves museum in Porto.

The next day, we visited the Serralves museum, which, while located at the edge of the city, is a pleasant walk from the Rem Koolhaas-designed Casa de Música and an efficient Metro that puts the waterfront and other major sites within easy reach. The museum features a permanent collection, temporary exhibitions of modern art, and impressive gardens with sculptures and a variety of vegetation — including a pond and an aromatic herb garden. 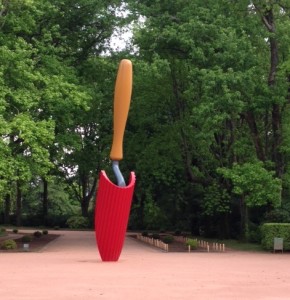 A sculpture by Claes Oldenburg at the Serralves gardens in Porto.

I was pleased to see the number of buildings that were being restored in the downtown and waterfront areas. When I first saw these buildings three years ago, I thought it was a shame to see them crumbling to dust. As in the downtowns of many cities in the United States, the department stores were languishing or already shuttered, victims of suburban sprawl. Three years later, some are reviving, and others have been replaced by boutiques and restaurants. I saw far fewer empty storefronts. 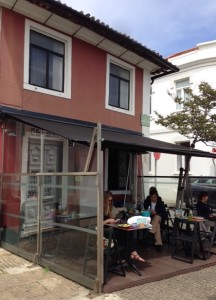 Located on the waterfront, the Casa de Pasto de Palmeira stands out for its atmosphere and fresh seafood.

For longtime residents, the influx of tourists and more permanent inhabitants is a  mixed blessing. Housing prices have already increased, as have prices for a variety of consumer goods. However, there are also more jobs, and much of the restored housing was previously abandoned, so there are now more housing units overall. Whether the influx of hipsters is a temporary phenomenon or a sign of long-term change for Porto remains to be seen, as does its overall impact on the city’s residents.

Update: With increased tourism, can great restaurants be far behind? Apparently not, because some outstanding ones have opened in the months following the initial publication of this piece. Please check out these reviews of restaurants we visited with our friend Sandra in June 2016!