At the beginning of August 2019, my YA historical novel TORCH went out on submission. Usually, August is one of publishing’s slowest months, with many editors on vacation and the ones in the office (in the pre-COVID days when people went to offices) working short hours. Still, projects do sell in the summer, and often with other aspects of publishing slowing down, editors have more time and fewer manuscripts to read. 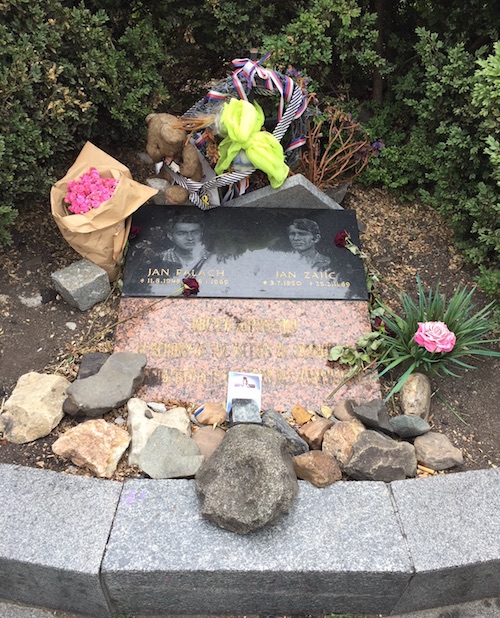 A memorial to two young men who sacrificed their lives to resist Communist tyranny in Czechoslovakia.

TORCH is the story of a group of teenagers living in the aftermath of the Soviet invasion and occupation of their country, Czechoslovakia. They’d watched helplessly as their freedom to listen to rock ‘n’ roll, read books from the West, and criticize the government disappeared after the tanks crossed the border in August 1968. They talked in whispers about how they would resist, and what they’d do if resistance proved futile. They remembered the good times and wondered it they would ever see them again. Their future contained little reason to hope.

The same time the manuscript went out to the first round of editors, the people of Hong Kong faced a similar situation. A former British colony, Hong Kong passed to Chinese control in 1997, but the Hong Kong Basic Law stipulated a measure of independence from the Beijing regime, including freedom of the press, freedom of assembly, and local elections. A law to permit the extradition of criminal suspects earlier in the year ignited massive protests, as residents of the city believed it would be used to ship political dissidents to the mainland. They had reason to worry; four years earlier, a popular bookseller was kidnapped to the mainland for selling books banned by the Chinese government. After Hong Kong residents filled the streets, occupied the Parliament building and the airport, and mobilized for a stunning victory in local elections, the Chinese Communist regime sent tanks and troops to the border. It was a show of strength meant to intimidate, the same way the Soviet and satellite nations’ tanks massed at the border of Czechoslovakia to intimidate before advancing and occupying the country.

Perhaps because the Chinese tanks had made my historical novel timely, I received my first yes from an editor in this tense moment. And in contrast to what happened in Czechoslovakia, the Chinese tanks didn’t crush the uprising. The local election moved forward. Hong Kong residents continued to read books and visit websites unavailable to their counterparts in the rest of China. It seemed that the Hong Kong Basic Law would continue to stand for the time being.

Then the COVID-19 pandemic hit. Various authoritarian leaders used the virus to consolidate power, censor the media, and restrict opposition. Fear of contagion and mandated lockdowns kept people off the street. At least in most of the world, the lockdowns enjoyed near-universal support, and in most democratic countries, leaders didn’t take advantage of them to initiate a broader repression. However, China is not a democratic country. Ruler-for-life Xi Jinping initiated, and the rubber-stamp legislature passed a national security law that ends Hong Kong’s special status despite the guarantees of the 1997 handover. Immediately afterward, the secret police rounded up dozens of dissidents and forced student leaders to renounce their organizations and activism. Journalists in Hong Kong have asked their newspapers and websites to delete old articles that could now land them in prison with long sentences, including the possibility of dying in prison like Nobel Peace Prize winner Liu Xiaobo. All of this has taken place when Hong Kong’s citizens are locked inside their homes due to COVID-19, with even more limited ability to protest or to travel elsewhere.

In an article for The New York Times, journalist Li Yuan writes about the hard choices that her friends in Hong Kong, like the Czech teens in my novel, now have to make. She describes dinner parties where they share tips for surviving political prisons. They look to the experiences of counterparts on the mainland who endured similar crackdowns and who now live lives of professional hardship, fear, and silence:

After dozens of critics were jailed and many social media accounts were deleted by censors in 2013 and 2014, liberal intellectuals went quiet. Writers and academics could no longer get their books and articles published. Their speeches and seminars were canceled. Human rights lawyers were almost wiped out. Many journalists quit to become public relations managers for tech companies.

Those were changes caused by external forces. People were changing internally too. Gradually, most liberal intellectuals stopped writing and speaking publicly, partly out of fear and partly out of a sense of futility. 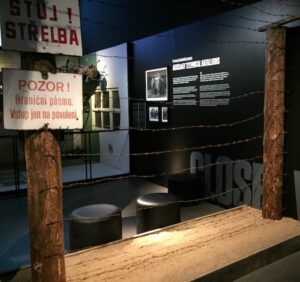 Example of a border fence, from the Museum of Communism in Prague.

After China passed the national security law, the UK government offered to take in all Hong Kong residents who hold British passports and their family members, approximately 40 percent of the population. After five years, these refugees would be eligible for British citizenship. Obstacles await those who consider this path. Prospective emigrants will need to research the process, chase down documents, and apply for themselves and family members with increasingly restricted internet access and public officials disinclined to help dissidents. Once they move, they will have to start over in a new country during a COVID-induced recession and are unlikely to find new jobs that utilize their skills and experience. Although the UK (and perhaps other countries) may offer asylum, China may not permit people to leave, the same situation faced by prospective emigrés from the Soviet Union and Eastern Europe during the Cold War.

On this Independence Day in the United States, I think about the many people throughout the world who have lost their independence and freedom overnight, through military coups, foreign invasion and occupation, or regime crackdowns. As a writer, I appreciate my freedom to create the books I want and imagine how difficult it would be to write only what I was told, or allowed, to write. If you’re reading this, and you’re also a writer, I’d like you to think about creating your stories under these circumstances. Would you be all right with singing a regime’s tune? Or would you chafe against the restrictions? If you end up in a place like this, would you have an exit strategy, or find a way to create in secret? If you don’t want others, or yourself in this situation, organizations like PEN International and PEN America are fighting the good fight for freedom of expression around the world. And when you hear leaders at home using July 4th festivities to threaten a shutdown of Black Lives Matter activists, liberal intellectuals, and other critics, remember the words of Maya Angelou: “When someone shows you who they are, believe them…” And vote them out while you can.