I’m a Mentor! The #KidsNeedMentors Program 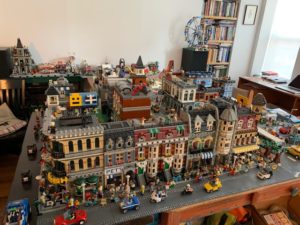 Little Brick Township in August 2019, with the two houseboats. Other constructions have found new homes, however.

Several years ago, author Ann Braden teamed up with fellow author Jarrett Lerner and educators Kristen Picone and Kristin Crouch to provide books for classrooms. The program soon shifted to providing the authors themselves — as mentors for students at all levels. Soon the number of teachers requesting mentors for their classrooms outstripped the number of volunteer authors, and a call went out for more, including authors who hadn’t published in a while, ones who’d signed a contract but the debut book hadn’t come out yet, and self-published authors. While many schools bring authors in to speak, others cannot afford to pay, or are located in remote areas. The #KidsNeedMentors program uses technology to bring those authors into the classroom. 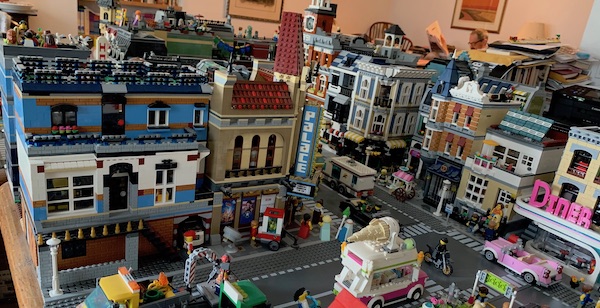 Among the Lego Modulars (now called Creator Expert) are three modular buildings that are my own design and construction. See if you can spot them!

Although Rogue is now out of print, I do have a couple dozen copies in my apartment and wanted to make them, and myself, available to kids. So I signed up for #KidsNeedMentors for the 2019-20 school year and was matched with a sixth grade class in the Alfred-Almond Central School District, taught by veteran teacher Andrea Oriend. Alfred-Almond is a rural area in the Southern Tier of New York State best known for a terracotta tile factory at the turn of the 20th century and today two universities, one private and one public. In fact, one of the people I interviewed in researching Gringolandia taught comparative literature at Alfred University in the early 1990s.

I look forward to Skyping in with the sixth graders and sharing what I know about the writing process. I’ve already mentioned my blog as a place where I can post advice, Q&A’s, photos of student work (as I did here in a writing workshop I led for high school students at Passages Academy, Staten Island), and, of course, Lego pictures related to writing. Or related simply to having fun. I have a long history of presenting my Lego photos with reading and writing tie-ins to middle schools either in person or remotely. Several years ago, I was invited to Hommocks Middle School on World Autism Day to talk about Rogue. I had a small group of sixth graders at the beginning, but when students found out Lego pictures were involved, I finished with more than 90 students, a jam-packed standing-room-only in the library. And when Rogue was chosen as a Finalist for the Truman Award, the state award for Missouri, I Skyped into a number of classrooms throughout the state and was able to give the middle schoolers a guided tour of Little Brick Township, something that would be impossible to do in an in-person visit for obvious reasons. 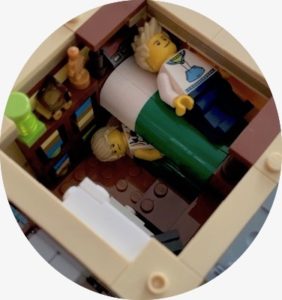 In this vignette depicting a scene in one of my novels, brothers share stories.

I’ve used Lego buildings and minifigures to teach writing concepts in the past. Among those concepts I’ve explored are the importance of a central throughline and character desire, and point of view. As part of my mentoring, I plan to write more of these pieces, and challenge my students to share their perspectives as well. After all, writing a story and building a Lego structure have a lot in common, and those cute little minifigures are an unending source of inspiration for stories!