I Walk a New Dog

Last week I picked up Charlie’s ashes and pawprint from the veterinarian. Maddy will keep the pawprint but we plan to scatter his ashes near all his favorite New York City places — the planter he peed on in front of the Sullivan Street Bakery, the Pier 84 dog run where he basked in attention from tourists to the Intrepid Air & Space Museum, and the blocks between Avenue A and C where he took his daily walks and finally learned not to bark and lunge at the big dogs. Maddy wants to save some ashes to leave in Brooklyn, where Charlie never went in real life but in honor of one of Brooklyn’s most famous residents, Walt Whitman, who wrote:

I bequeath myself to the dirt to grow from the grass I love,

If you want me again look for me under your boot-soles. 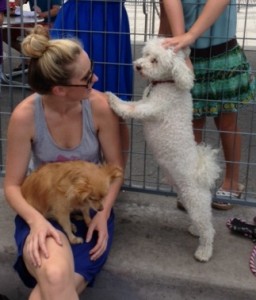 Charlie with fans at the Pier 84 Dog Run.

The apartment is quiet without the pitter-patter-pitter-patter of little paws, and I miss the smell of wet dog when we’d come in from a walk in the rain, his tongue licking my fingers, his warm body against my legs. I could go days without leaving the apartment if it weren’t for his three to four walks a day, as small dogs tend to have small bladders and Charlie liked to leave his mark on society.

However, the end of my dog parenthood has been mitigated by my new status as a dog walker and “auntie” for my friend and writing partner Susan’s dog, Buddy. At the end of August, Susan broke her leg, and since Buddy is a big dog — 45 pounds but long-legged — she’s not going to be able to walk him for a while. Buddy is a hero dog: Susan’s accident took place early in the morning when the rest of the family was asleep, and he alerted the others to her distress so they could get help promptly. But he’s a modest chap, not demanding new privileges for his actions, though Susan reports that he has become a bit more protective in the past few weeks. 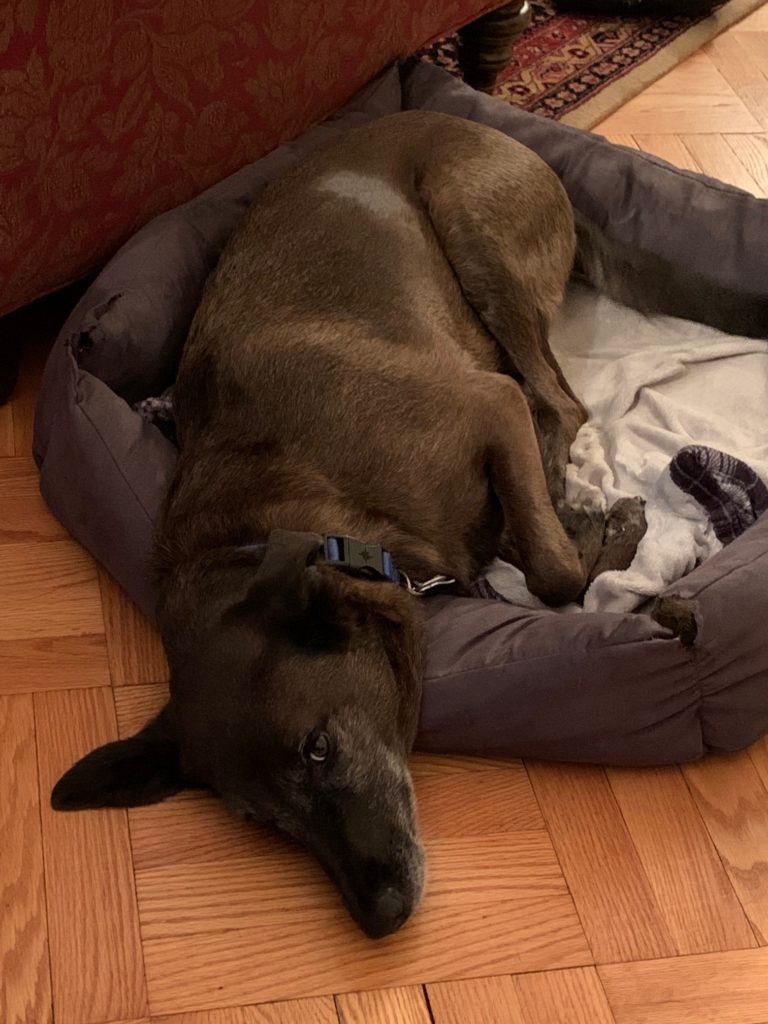 Buddy seems to know that I need his affection, because he sticks close by me during our writing dates. And we’re getting used to each other on our walks. He’s seven years old, so he’s had a long time to adjust to his family’s style of walking, and at first he dug in his paws. I couldn’t pull or lift him, the way I could with Charlie, so I had to use gentle persuasion, talking to him, reassuring him I wouldn’t put him in danger or take him from his people. Like Charlie, he has a habit of barking at other dogs, and I learned from my work with Charlie how to distract him so he wouldn’t notice another dog walking the opposite way on the sidewalk. (Apparently, Buddy barks when other dogs pass him, but not when they approach him.)

When I walk Buddy, it’s in a different neighborhood where I don’t know the people, so along with getting used to another dog’s preferences and quirks, I will be meeting the other residents with their pooches. In about a month, Richard and I will be moving to a larger apartment four blocks from Susan, so her neighborhood will be my new neighborhood as well. And Buddy will be my introduction to the people there, just as Charlie helped me to become part of all the neighborhoods where we lived during his fifteen years with us.