I Conquer the Build

Not wanting to humiliate myself, I paid extra attention in the initial stages of the build, and as a result, the Tree House went up without a hitch. The set has great details that remind me of the Swiss Family Treehouse at Disneyland, which closed in 1999 but still apparently exists in Disney World’s Magic Kingdom Park and at Disney Parks near Paris and Tokyo. The marooned but wonderfully self-sufficient family consists of a mother, a father, a girl and a boy. The parents sleep in one of the round tree houses, while the kids have their own room with bunk beds and a telescope on the terrace. Between the two houses is a bathroom with a round tub/shower combo, a sink, and a toilet. Next to that toilet is that most coveted of pandemic necessities — toilet paper!

Why are scissors under the bed? 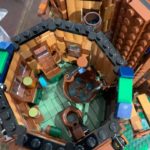 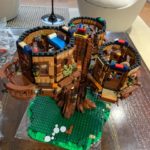 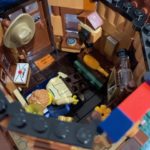 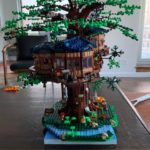 View of the creek side

View of the kitchen side 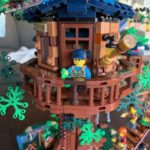 Coming down for breakfast

The family cooks outdoors and eats at a table with only three chairs. I’m not sure how they decide who doesn’t eat or has to stand. Landscape features include a creek that runs along one side of the tree house property. Two sets of leaves — one light and dark green, and one orange and yellow — reflect the changing seasons. When I started the project, I pledged to replace the green leaves come September, but later on grew less enthusiastic, as they’re tedious to assemble and take some effort to attach the leaves using the connector pieces. The leaves and connector pieces are made of the new biodegradable plant-based material rather than molded plastic. For ecological reasons, Lego had hoped to make all their building elements and minifigures from plant-based materials but found that the new pieces weren’t sturdy enough for anything beyond decorative elements.

My healing ankle didn’t interfere with my ability to build the tree house, and I found I could move onto the rug to pick up dropped pieces and to photograph the finished product with little strain. I’m now carrying out my physical therapy via video chat since it’s not safe to take a taxi, Uber, or Lyft to a medical office in New York City these days. I’m making steady progress. The travel wheelchair has been folded and stashed in the front closet, and the knee scooter is sitting in an out-of-the way corner awaiting pickup by the medical supply company. I’m walking with one crutch most of the time but can take a few steps with no crutches at all. Not having to use both crutches means I can carry things around the apartment, and being able to bear weight on the ankle means I can stand at the kitchen sink and wash dishes — my usual household task since no one wants to eat what I cook.

I’ve also added to my gallery of Lego matching puzzles for my daughter’s first grade class. They’ve been a favorite of the little ones, who look forward to each Monday morning when Maddy posts them. I hope you enjoy them as well!