How’s That Writing a Story in Portuguese Thing Working Out?

Apparently, a lot better than uploading my video progress report to this web site. In the end, I had to delete the videos and substitute a photo of my first page, with tabs for all the other pages that I’ve written out by hand, in pencil. In Portuguese. 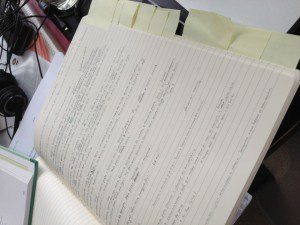 The story had to be 4 pages long and include topics, vocabulary, and grammatical structures that we studied in the first and now the second semester of Portuguese. The professor gave us a prompt, a story in the style of a folktale, which she presented in present tense, and if we were to continue that story, we’d have to convert it into the simple preterite and imperfect forms of the past tense. We had the option of taking the story in a new direction with the same characters, or “killing off” the characters and creating new characters and a new plot line.

You may notice that this page has very small handwriting, and nine post-its, which are the other pages on which I’ve continued the story. I’ve been typing it in as I’ve gone along, and I’m now about a page or two away from the end. In my Word file, what I have already is 13 pages, double-spaced. I hope my professor will find the many extra pages worth the read from a storytelling standpoint, and not full of grammatical errors. The truth is, I like my characters and the way the story is going, and I’m considering continuing to write beyond the time the assignment is due and the class ends. Whether I continue to write the story in Portuguese or switch over to English is still in question, and I will write about that topic shortly on this blog.

After a bit of attrition, the class now has 12 students, and I’ve worked one-on-one with several of them to help them get started on their stories. I also just sent an email with some basic writing tips to the class as a whole. I see this is a kind of Creative Writing 101, and I hope it will help my fellow students who feel stuck when having to make things up. This is what I wrote:

While you won’t be graded on your storytelling but on the grammar and vocabulary, these suggestions may help you organize your thoughts and get started:

There are two places in the assignment that are natural sources of conflict: the commemorative event, which will likely involve the party, and the starting of the business and hiring of employees.

2. Show, don’t tell. Dialogue is a good way to show what your characters are like, as you’re letting them speak for themselves. Characters should also be active, and their actions should move the story forward. Use the foreground/background chart as you write. If you find that your verbs are all in the imperfect (all background), you need to put in more action and dialogue.

3. The health problem is a good example of a crisis. As the conflict intensifies, the stakes get higher, to the point of being life-threatening. This adds interest to your story. While your new character may help your main character to resolve the crisis, the main character needs to be the one who takes action.

So if you ask me “How’s that writing a story in Portuguese thing working out for you, I’d have to say: “Ótimo!”