Categories Menu
Home » Blog » Home Is Where the Art Is: A Profile of Illustrator Elizabeth Zunon

Home Is Where the Art Is: A Profile of Illustrator Elizabeth Zunon 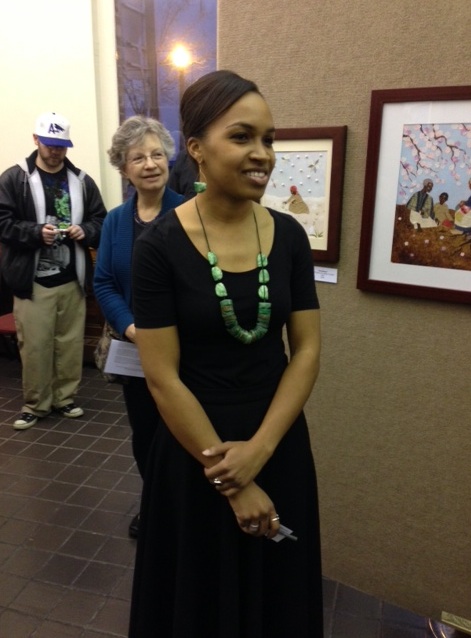 Liz speaks to her fans, including her mom standing behind her

I met Elizabeth Zunon in summer 2012 at Albany’s annual African-American Family Day, where she displayed and read from the most recent picture books that she had illustrated, My Hands Sing the Blues: Romare Bearden’s Childhood Journey (Marshall Cavendish, 2012) and The Boy Who Harnessed the Wind (Dial, 2012). Her colorful paintings and collages impressed me immediately, and she soon became one of my favorite children’s book illustrators working today. The fact that such a talented artist lives and works in my city was a bonus. Over the next year and a half, I attended other book events, including the launch of a revised biography of President Barack Obama, A President from Hawai’i, that Liz also illustrated in her signature multimedia style. In addition to her books, Liz creates stunning textiles and jewelry, and I had the opportunity last summer to visit a temporary studio in downtown Albany where she created and sold these works. 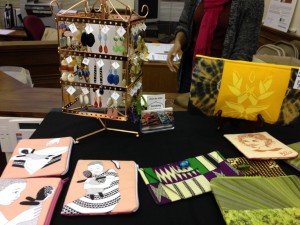 Like the President who she portrayed in a picture book for children, Liz is biracial. Her father is from the Ivory Coast, and she spent the first 12 years of her life there. She writes,

Surrounded by bright, vibrant African fabrics, tropical trees and flowers, I developed a love of color and pattern which still sticks with me today. We spoke French in the Ivory Coast, but my mother also made sure to read bedtime stories in English to my brother and me, and we spent summers in Albany at my grandparents’ house. We would watch Reading Rainbow on TV and look for those books with the Reading Rainbow sticker on the shelves of the Pine Hills Library!

By the way, the Pine Hills Library is my local library in Albany! 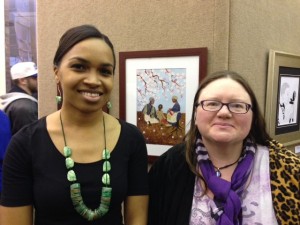 Liz with another big fan — the manager of the Little Book House, Rachel King.

Tonight, Liz became the third Albany-area artist featured in the gallery of the new African-American Cultural Center in downtown Albany. Located in a Key Bank that closed two years ago, the African-American Cultural Center promotes the work of writers and artists and has a lending library for children and adults. The opening of Liz’s exhibit was packed with people who marveled at her jewelry, textiles, oil paintings of black celebrities, black-and-white gouache paintings of birds and animals, oil and fabric collages of people and scenes from Africa — and the original illustrations from her award-winning books! 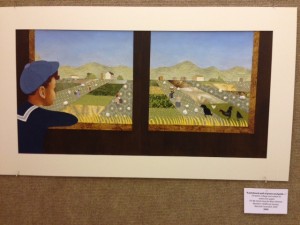 One of my favorite illustrations from My Hands Sing the Blues: Romare Bearden’s Childhood Journey.

I immediately thought of my friend Ed Spicer, who collects award-winning original illustrations. I am sure he’d love these multimedia originals that include the cut-paper collages that graced the pages of William Kamkwamba and Bryan Mealer’s The Boy Who Harnessed the Wind, winner of the prestigious 2013 Children’s Africana Book Award among many other honors. Many of the dozens of people in the small gallery were picking out their favorites and figuring out their budgets so they could take one or more of the paintings home at the end of the month-long exhibit. In the meantime, some of the purses and earrings had already found new homes. 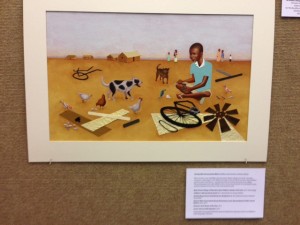 Illustration for sale from the award-winning The Boy Who Harnessed the Wind.

I’m certain that the strong turnout, especially on a cold, rainy night at the end of a cold, miserable winter, heartened Liz and her parents, who were also there. In her short speech, Liz thanked them for supporting her and putting her through art school at the Rhode Island School of Design. (I know her parents and wish that every creative person could have parents as awesome as hers.) But there was other good news for her and her fans. Next to the gallery entrance were two posters, one for each of her forthcoming books! She is the illustrator for a fall 2014 picture book by the acclaimed author Nikki Grimes. The book, Poems in the Attic, from multicultural publisher Lee & Low, depicts a young girl who finds in her grandmother’s attic a box of poems written by her mother when her mother was her age; they tell the story of a girl who has to move frequently because her father was in the Air Force. 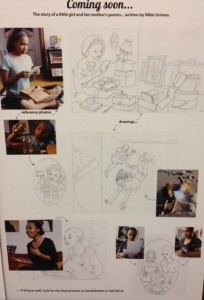 A poster announcing the forthcoming Poems in the Attic, written by Nikki Grimes and illustrated by Elizabeth Zunon.

And sometime in 2015, Liz builds on The Boy Who Harnessed the Wind with another story set in Africa that has an environmental theme. One Plastic Bag, written by Miranda Paul and published by Millbrook Press, portrays Isatou Ceesay, who collects plastic bags  littering her village in Gambia. She and other women artists wash the bags, cut them into strips, and weave the strips into handbags, totes, and other items that they sell to raise money for their business and to educate people about proper waste disposal and recycling.

I’m excited about Liz’s new books and expect that as more people find out about her work, her fan base will grow along with her list of accolades. 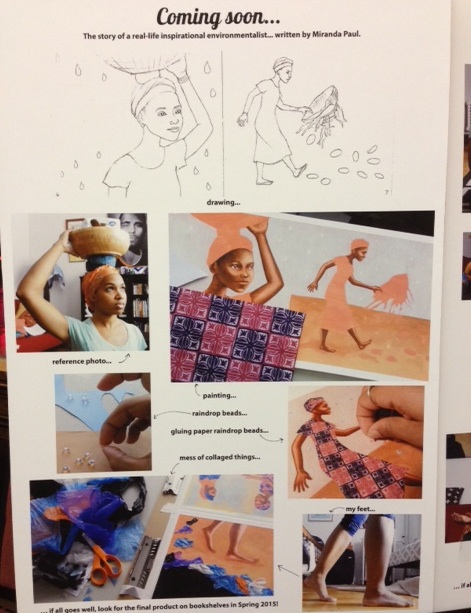 A poster announcing the forthcoming One Plastic Bag, written by Miranda Paul and illustrated by Elizabeth Zunon.