Like many parents of young children in the 1990s, I sometimes sat my kiddies in front of the television, popped in a VHS tape, and enjoyed the 90 minutes of “me time” that followed. My daughter and son had their favorites among the cartoons and live-action movies that littered our family room, among them the Disney version of Robin Hood. This loose adaptation of the folktale features foxes, rabbits, snakes, lions, and other critters playing the parts of the human characters. First released in 1973, Robin Hood tells the story of a merry band of outlaws in Sherwood Forest who ambush Prince John’s coach and use the proceeds to help the starving animal peasants of the town. But there’s a penalty for “robbin’ royalty.” Prince John — a scrawny lion who has taken over from his majestic and kind brother, King Richard, off fighting the Crusades, and proclaimed himself King (with a crown that keeps falling off his undersized head) — appoints the craven Sheriff of Nottingham and the greedy Sir Hiss to “double the taxes…triple the taxes!” Among other atrocities, the Sheriff and his deputies clear out the savings of the disabled town blacksmith, Otto, and confiscate the meager birthday present of the young rabbit, Skippy. 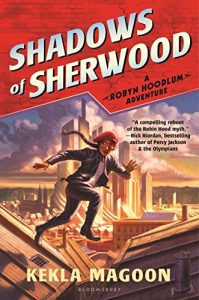 Kekla Magoon’s Shadows of Sherwood is an example of a modern Robin Hood retelling.

After the foxy Robin Hood shares his bounty with Skippy, the bunny becomes his constant companion as he courts wealthy Maid Marian. In the meantime, things get even worse for the denizens of the village as more and more of their earnings end up in the hands of their landowners and rulers. Robin Hood and his allies devise a scheme to free those townspeople now in debtors’ prison or in the case of Friar Tuck (a lovable bear) awaiting execution for resisting the Sheriff. In the end, justice wins out. Prince John’s castle catches fire, the prisoners are freed, their property is restored, and the rightful king returns. Oh, and Robin Hood marries his true love.

Watching the debate over the tax bill brought back memories of this Disney classic, as more than any other attempt at “tax reform,” it constitutes a windfall for the owners and rulers at the expense of ordinary people. Over the next ten years, most people — especially those in states where the people have voted for the almost-powerless opposition party — will see their taxes go up, either directly because of higher rates and fewer deductions, or because they will have to pay out of pocket for services the government used to provide or forgo those services altogether.

The bill is not a popular one according to opinion polls. Robin Hood — the 1973 movie for children, the adaptations for older audiences, or the folktales passed down through centuries — reflects a commonly-held sense of justice in which poor people should not bear financial burdens greater than those with more resources and should not be dispossessed outright of what little they have to benefit those who already have more than enough. The original bandit, who robbed from the rich to give to the poor, was a folk hero whose “crimes” tipped the scales of justice toward those who experienced great injustice.

The elevation of folk heroes like Robin Hood offers a warning as well. How long can the rich and powerful immiserate the poor and powerless before groups emerge to take back some of that wealth — and punish its owners? The Disney movie is cute and funny and satisfying, but real revolution is not cute or funny — and it rarely ends up satisfying. The French Revolution, a retaliation against an elite that had impoverished and humiliated the peasantry, devolved into a bloodbath. The utopian ideals of the Russian Revolution gave way to 72 years of totalitarian dictatorship, the Stalinist purges, the gulags, and secret police agencies that continue to undermine democracy around the world long after the end of Communism.

Robin Hood stories continue to appeal, and it’s hard to see how that appeal will diminish in a reverse-Robin Hood society that takes from the poor and middle class and gives to the rich. Corporate media companies may fall into lockstep to elevate different stories, for instance those adapting the individualistic “winner take all” ethos of Ayn Rand or a punitive Christianity that blames poverty, illness, and social ills on lack of personal virtue, but folk stories passed from person to person have thrived in the most difficult of times.