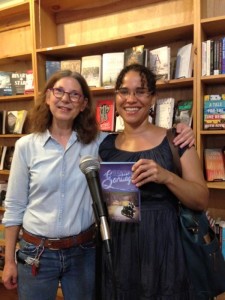 I usually don’t devote space on my blog or other social media to trumpeting recognition that my books receive. (Okay, I do it occasionally, but most of the glory for a translated book goes to the author and illustrator, as well as the English-language publisher that has taken a risk on something book buyers might deem “too foreign.”) It’s a tough business — both highly competitive and highly subjective — and I don’t want to diminish or upset others with equally worthy books.

However, small press and indie published books rarely receive the same level of recognition that major publishers enjoy for their lead (the biggest books for the season) and frontlist (other books that receive significant marketing attention) titles. There just isn’t the space in review journals to review everything. None of the major professional journals reviews self-published books, though one can pay for a Kirkus Indie review or a listing and a chance to be reviewed in Publishers Weekly‘s PW Selects. 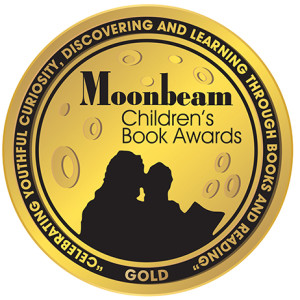 For that reason, award programs restricted to small presses and self-published books are especially important in recognizing the growing number of books with few or no marketing dollars but much passion on the part of their authors and publishers. Surviving Santiago came out with one of those small presses, Running Press Kids and Teens, and last October, I found out that it received its first “indie-friendly” award, the Moonbeam Gold Medal in the YA Historical/Cultural Fiction category. As a fan of both diversity and historical fiction, I was especially thrilled. Six years ago, Gringolandia received a comparable award from the Independent Publishers Association (the sponsor of the Moonbeam Awards) — the IPPY Gold Medal in Children’s Multicultural Fiction. 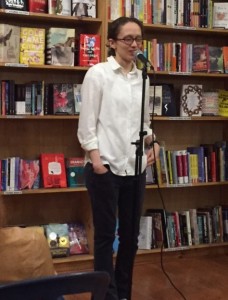 I was back at Bluestockings last month to hear Meagan Brothers read from and talk about her acclaimed Weird Girl and What’s His Name.

Last week, I found out that Surviving Santiago was also selected as a Finalist in the ForeWord Magazine‘s INDIEFAB Book of the Year Awards for YA Fiction. I was excited to see two of my favorite books from 2015 on that list as well — books that I’d reviewed for The Pirate Tree. Craig Lew’s Breath To Breath narrates in powerful verse the true story of a teenage survivor of sexual abuse trying to put his life back together and to prevent another child from going through what he had to endure. Meagan Brothers’s Weird Girl and What’s His Name challenges stereotypes of sexuality and sexual orientation as it explores through alternating points of view the friendship between a gay boy and a questioning girl who live in a small town in North Carolina and are obsessed with The X-Files. Again, Gringolandia was a finalist back in 2010. The final list comes out in June.

Then I got a message from my friend Meg Wiviott (whose Paper Hearts also made the list) that Surviving Santiago was chosen as a Best Book of 2016 by the Bank Street College of Education in the 14 and up category. (Gringolandia also made this prestigious list in 2010.) The Bank Street list is not restricted to small press and indie-published books, but it’s one of the few mainstream lists that does include self-published titles. In fact, two of Zetta Elliott’s picture books, I Love Snow! and A Wave Came Through Our Window, were on the 2016 list, following the inclusion of her Room in My Heart on the 2015 list. Zetta writes,

I’d like to thank the Children’s Book Committee at Bank Street for having open minds and giving my books their stamp of approval. No author should have to win an award or make a “best of” list just to have their book available in public libraries, but indie authors are generally held to a higher standard…which isn’t fair, but we persist!

Zetta’s award-winning books and several other recent titles have now been acquired by both the New York Public Library and the Brooklyn Public Library, with, hopefully, many more to follow.

I am gratified by the recognition that Surviving Santiago has received and hope that it also leads to the book becoming more widely available for readers, young and old. This good news has also encouraged me to keep working on my historical fiction and publishing more in this genre — perhaps not right away, but when I think my work-in-progress is ready and when its time in the market has come.