Categories Menu
Home » Blog » Films for the Resistance: The Edge of Democracy

Films for the Resistance: The Edge of Democracy

“Brazilian democracy and I are almost the same age. And I thought that in our thirties we would both be standing on solid ground.” So begins Brazilian director Petra Costa’s newest documentary, The Edge of Democracy, which chronicles the country’s emergence from 21 years of dictatorship in the mid 1980s, its flourishing under the leadership of Luíz Inácio Lula da Silva — ten years ago considered the “world’s most popular politician” — and its recent slide into fanatical right-wing autocracy with the election of Jair Bolsonaro. 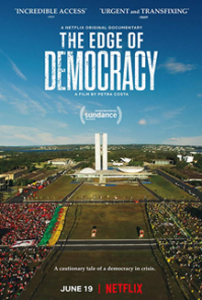 Costa’s film, available on Netflix after a limited theatrical run, shows the corrosive aspects of money in politics as well-funded business interests influenced politicians across the political spectrum and took advantages of weaknesses in the political system to gin up corruption charges against political enemies. The chokepoint in the system was Sérgio Moro, who abused his role as both prosecuting attorney and judge to persecute Lula once he left office as part of the far-reaching Lava Jato (Car Wash) scandal, eliminating him as an obstacle to Bolsonaro’s election via his conviction on corruption charges. The film reveals the sexism and misogyny that spurred the impeachment of Lula’s successor, Dilma Rousseff, Brazil’s first female president, for fiscal incompetence as the economy took a downturn. Even though Rousseff’s center-right successor, Michel Témer, was implicated in the Car Wash scandal and the economy failed even faster under his leadership, no one sought to impeach or imprison him. As under the dictatorship, political prisoners turned out to be only of the leftist persuasion.

The Edge of Democracy is a personal reminiscence as well as a political chronicle. The dictatorship divided Costa’s family. Her maternal grandfather owned a construction company involved in Car Wash that has done business with the government since the early twentieth century; in fact, some of Brasília’s monumental buildings designed by Oscar Niemeyer were constructed by his firm. (The film has haunting photos of these Niemeyer-designed monuments in the planned capital of Brasília including a deserted Presidential Palace and a giant esplanade where red-shirted supporters of Lula and Rousseff faced off against yellow-shirted Bolsonaro supporters, police and fences between them.) Her mother and father were pro-democracy activists who were arrested and spent years in hiding or in exile before the military handed over power to an elected government. One of the film’s most poignant moments is a conversation between Dilma Rousseff and the filmmaker’s mother when they shared their experiences of arrest, interrogation, and life underground, and the then-president spoke of the freedom of anonymity during those days. Costa’s family connections have given her unusual access to the impeachment deliberations, Lula’s trial, and the politicians themselves, including a slightly younger but no less extreme and arrogant Bolsonaro, who in 2015 was already convinced of his destiny to lead the country back to the cultural and political certainties of military rule.

Those of us who live under Donald Trump and a rightward-moving Republican Party will note the similarities — the misogyny that characterized right-wing politicians and the media’s treatment of both Hillary Clinton and Dilma Rousseff, the desire to take the country back to a mythical time when people of color, LGBTQ+ persons, and the poor knew their place and were brutally punished if they didn’t, the use of spectacle to build a totalitarian group identity (one notes Bolsonaro’s signature gesture, the two-handed pantomime of shooting opponents that his supporters mimic), the polarization of the population until they come to see each other as less than human. One sees also how those committed to authoritarian rule exploit weaknesses in the system to disable their opponents. In both countries, unlimited corporate money in political campaigns drowns out opposition and moves every politician, even the beloved Lula, to the side of corporations and the right. Then the right weaponizes growing inequality into “populism,” with people losing their middle-class status hearing from politicians and the corporate media that their losses are due to Others — people of color, immigrants, religious minorities, women in the workforce, LGBTQ+ persons, socialists. Election irregularities, accusations of corruption, and parliamentary stonewalling become means of weakening faith in democracy and in elected politicians, so that a growing number of people begin to see authoritarianism as a way out of the impasse. The fact that U.S. democracy is more than 235 years old, not less than 35 years old, doesn’t mean it can’t go the way of Brazil’s — or it hasn’t gone that way already. 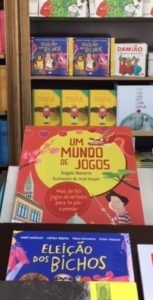 And what are the consequences? Besides polarization that has destroyed families and friendships, we see the unprecedented levels of threats and violence in both countries. In Brazil, opposition politicians are incarcerated, and the far right leaders and their supporters celebrate the probability that Lula — whose wife already died of a stroke during the trials — will die in prison. Opposition press outlets are closing or, like The Intercept, under threat of shutdown by law or violence. The Edge of Democracy shows a firebrand leftist delegate denouncing the impeachment proceedings. After the documentary was released, that elected leader, Jean Wyllys, the second elected LGBTQ+ member of the legislature, fled the country for Europe, the result of death threats and the murder of an LGBTQ+ councilperson in Rio de Janeiro the previous year. Many other Brazilians are fleeing to Portugal and elsewhere for safety and freedom. Amid calls of “lock her up” and “send her back,” we cannot rule out the possibility of this happening in the U.S. if we don’t make a change in next year’s elections.

During the tumultuous years of Rousseff’s rule, a collective of Brazilian writers and graphic designers created a series of books to teach young people the value of democracy and civics. The first of those books, Eleição dos Bichos (Animals’ Election), explores what happens when Lion, the King of the Jungle, diverts the river to fill his swimming pool. Young readers see how rulers unaccountable to the people (or animals) can destroy their lives in an instant. While Eleição dos Bichos and its successors failed to stop Bolsonaro’s election, there is still hope as long as there continue to be elections and the leader abides by them. In January, this book will appear in the U.S. under the title The President of the Jungle, in time for our election season. I am honored to have translated this book, which will be published by the Nancy Paulsen Books imprint of Penguin Random House, the same imprint that brought out my novel Rogue in 2013. I hope that this book finds its way into every school and every home, read by grownups as well as kids. And once the kids are in bed, it’s time to cue up The Edge of Democracy, because in order to defend our own democracy, we need to understand its value and how each of us can make it work.

Check out my other “Films for the Resistance” documentary reviews: Burning Bush and The Other Side of Everything.