Last month’s panel for the Bridge Series on Translation, co-sponsored by the PEN American Center and the Center for Fiction, focused on breaking into literary translation. This month addressed the process of editing translations. Many of the attendees were translators seeking to learn about the process from the other side of the desk; others were interested in becoming editors. The panelists — Bridge Series director Sal Robinson; Lexy Bloom, a senior editor at Viking and Anchor Books (Knopf); Jeremy Davies, an author and former editor at Dalkey Archive Press; and Declan Spring, Vice President and Senior Editor at New Directions — addressed both perspectives. 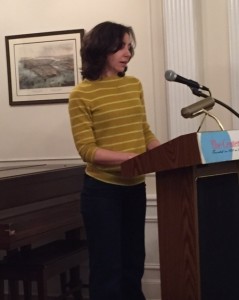 Robinson, who moderated the panel, asked how each editor started out. Spring began as an assistant running errands. He started asking editors questions and took a course at NYU that mainly focused on how to write editorial letters to authors. Eventually he received his first project editing a translation of a book by the acclaimed German author Peter Handke. Davies, too, started out as an editorial assistant and cut his teeth editing a lengthy novel by an Estonian author, a difficult project and a valuable education for the budding editor. Bloom started at the New York Review of Books and from there moved to NYRB’s book imprint, Granta. She worked on travel guides and gained experience editing translated books in a variety of genres. Her most memorable experience was editing a feminist noir novel of an author from Japan. She said she still remembers what the main character wore in the novel.

The next question addressed the question of “translationese,” things that sound stilted or otherwise wrong in the translation. Bloom compared it to a piece of music that sounded off-key. Is it deliberately atonal, or “wrong”? She makes a list of these queries for the translator. Spring observed that translationese is worse when the translator isn’t strong. He said New Directions works with the best and most experienced translators, so it’s less of a problem. He warned that an editor has to be careful not to lose the author’s style and intent. That’s why a good translator is well-versed in the broader context of the literary work. Davies affirmed the importance of not smoothing out the original author’s style. Often, translators are blamed for awkwardness when it’s part of the original text. However, a good translation renders the work non-standard in ways that are understandable to English-language readers. 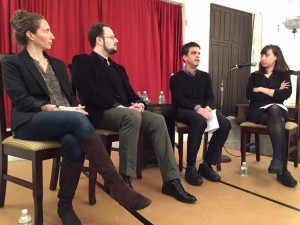 Robinson asked if some languages, such as Japanese, are more problematic. Bloom was the only panelist to answer, and she didn’t know for sure. Robinson then asked if any of the editors had changed a title or a character’s name. Apparently, titles get changed quite often because English doesn’t convey the meaning in the source language, or else there are already too many books with that title. Character names also get changed from time to time because they don’t convey the original or are not catchy enough; for instance, in a novel Spring edited for New Directions, a character had the nickname “Cool,” and he and the translator debated how to make the name more distinctive. Names are also changed to avoid demeaning ethnic slurs or stereotypes.

That brought Robinson to ask about politically correct language and how to address problems. This was the most interesting question for me because I had to deal with a culturally problematic text, one with stereotyped language and questionable appropriations having to do with Native Americans — common in books published in Europe (see, for instance, the controversy surrounding J. K. Rowling’s History of Magic in North America). I’ve chosen to change all those references but worried about my lack of faithfulness to the original. I was gratified to hear that I wasn’t the only translator who has to address this problem, and I haven’t committed an outrage against the profession by making the change. All of the editors have changed character names, racist dialogue, demeaning descriptions of characters, and other aspects that would offend readers in the United States. Often, humor and sarcasm don’t translate well. The meaning is lost and only the insult remains. Spring cited some of the works of the Spanish experimental writer Enrique Vila-Matas as posing challenges for translators and editors. Bloom described how some terms considered acceptable in French took on demeaning connotations, especially to South Asians, when translated into English. Davies said that Dalkey Archive confronted this issue all the time because of the edgy nature of the literary works they published. In one instance — that of a Swiss-German memoir — he removed an entire chapter that he felt was gratuitously racist. He worried that the author would resist, but the author not only didn’t but appreciated the editing. Apparently, the author didn’t realize either the amount of offense the chapter would cause or the chapter’s superfluousness with respect to the rest of the book.

Davies’s dialogue with the Swiss-German author led to the next question, about line editing and the process of working with both translators and authors. Bloom talked about how she changed a book’s entire ending in consultation with the Japanese author. The book was speculative fiction but it read too realistically in English. Spring talked about deleting redundancies, for which he usually goes to the translator rather than the author. He said that both translators and authors have been remarkably accepting of the editing process, even when it involves major changes.

There was a question about working with multiple translators, sometimes working on different books by the same author, and sometimes working on the same book. Davies has appreciated the collaboration between a native speaker and an English speaker; it saves him work at the editing stage. Bloom worked with two translators on a long Japanese novel and it came out especially well because the original featured a style change two-thirds of the way through the book, and the different translators reflected that. The editors mentioned working with editors in other English-speaking countries, but that will be covered again in a future session of the Bridge Series on rights.

Robinson’s last question had to do with equity and diversity in terms of authors and translators. Davies lamented the lack of books from the African continent. Bloom remarked that there are more agents and translators working with the common languages, so it’s harder to find books and translators for less-spoken languages. Spring admitted that New Directions has focused too much on books from Europe but said the publisher is now bringing out more titles from the Arab world, finding books published by new small presses in France and the Arabic-speaking countries of the Middle East and North Africa.

An audience member asked if the editor takes advantage of knowing the language of the original work. Usually not, the editors said.

As an author and a translator, I would certainly agree.