In the coming week, my Young Adult Fiction panel and the other first round Cybils panels will select the finalists to go on to the second round. My panel ended up with 179 nominees, and we will select somewhere between five and ten finalists, making this a very selective list and a very competitive process. I found myself nitpicking every book, trying to find reasons not to send it on because we can’t sent everything on. Or even one-tenth of the nominees. Given the fact that publishing itself is so competitive and 99.9% of all manuscripts get rejected, the ones that get published have to be quite good. And we’re choosing around 5% of these. 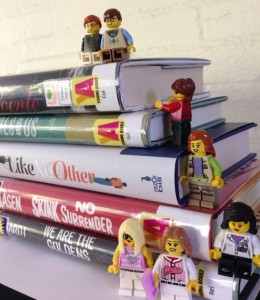 My Cybils panel. Note Trendsetter. I’m the hippie girl standing next to Like No Other.

So if you’re reading this and your Cybils-nominated book didn’t make it into the second round, you’ve already come very far. It also means that at least two panel members read your book, and they may review it or talk it up to colleagues. By way of example, I’ve already reviewed the following YA Fiction titles for The Pirate Tree or have reviews in the pipeline: 100 Sideways Miles, Blue Gold, Crazy, Don’t Touch, Gabi: A Girl in Pieces, Girls Like Us, Lies We Tell Ourselves (forthcoming), Pig Park (forthcoming), Rumble, Starbird Murphy and the World Outside, The Carnival at Bray (forthcoming), The Impossible Knife of Memory, The Secret Side of Empty, This Side of Salvation, and Willow. 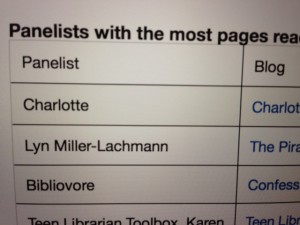 The site keeps count of our books read and pages read. One week from the end, I’m in second place for number of pages read. Will I make it to first place?

Panelists are supposed to read as many of the nominated books as possible, including the titles that their fellow panelists propose for the shortlist. Of the 179 nominated books, I have read 115 and expect to read close to 130 by December 29, when the finalists are announced. This puts me close to the top of all the first round panelists in all the categories in terms of the number of pages read. It also means that I have had no life since the beginning of October. A week ago I got an email from an old friend concerned because he hadn’t heard from me. He wondered if everything was all right. And it took me another week to email him back and let him know it was, that I had signed up for a volunteer task that has basically consumed my life.

So why did I sign up to be a Cybils panelist? It comes down to something one of my workshop leaders at Vermont College of Fine Arts, the brilliant and beloved Julie Larios, said three years ago. Looking at the various workshop submissions, she said that confidence in using language and telling stories comes from having read widely. If you want to write well, you have to read — both in your own category/genre and in others. It’s the Osmosis Strategy of Writing. 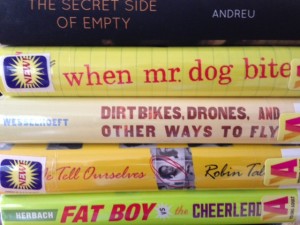 Books from the library and one from my own collection, reviewed in the spring.

I had planned my reading in the YA Fiction category, which includes contemporary realistic fiction, realistic historical fiction, mystery and suspense, and romance, to jump-start my next novel. I must confess that I’d lost a lot of writing momentum this past year as a result of having to trunk (for non-writers, that means to put a manuscript in a trunk and forget about it getting published) my contemporary realistic manuscript, ANTS GO MARCHING. I really liked this story, the characters, and what happened to them, and I don’t know if there’s something wrong with the writing, or if there’s no place in the market for it. I had thought about submitting it as an adult manuscript, or else serializing it on this blog. When a manuscript I’d written earlier and also trunked for several years sold to a publisher — my soon-to-be-published Surviving Santiago — I decided to set ANTS GO MARCHING aside and work on a new historical novel. But what? The manuscript I’d started, set in Portugal, is also contemporary, and it wasn’t working. Maybe it would work as a time travel. And I thought about a novel-in-verse prequel to Gringolandia and Surviving Santiago, expanded from a scene I like in Surviving Santiago. 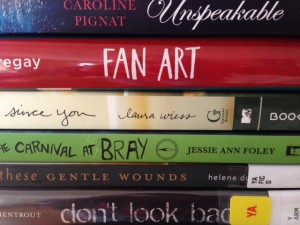 More books, some of them review copies from publishers. However, I had to get a majority of books from the library.

Hmmm. A novel-in-verse? I could even hear the verse in my head. But then I realized how many verse novels I’ve read for the Cybils, somewhere around three dozen. It’s a hot genre right now. And many of those verse novels read like prose with line breaks. I am not a poet. Never been. Never will be. If I write a novel-in-verse, it will be bad poetry. Maybe I can use a little for a character who aspires to be a poet but lacks the ability.

That brings me to the second thing I’ve learned from being a Cybils panelist (the first being the importance of reading widely). It’s hard not to be influenced by what you’ve read, especially if these books are hot in the market right now. But what’s hot today could be ice-cold two years from now. And even if it still is in fashion, it may not be your strength. I still don’t know what I’m going to write next, but I do know it will be something I care about, and in a form that works for me and my story.