Several weeks ago I walked home from meeting my daughter at Union Square, and the route I took brought me to the block of East 5th St. with a store called Hobby Electronics. Suddenly, a light clicked on in my mind. Over the holidays I’d seen Lego photographers on Instagram with holiday lights in their buildings and towns. Why couldn’t I have lights in Little Brick Township? 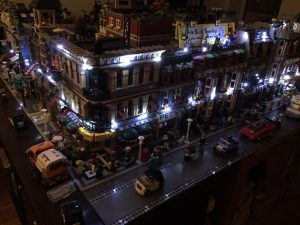 So last week I returned to Hobby Electronics and for eight dollars bought a 16-foot strand of small LED lights attached to copper wire and a battery pack. After checking out the various colors (warm white, cool white, pink, yellow, blue, purple, red, and orange), I decided neutral would work best in my colorful town and chose cool white as an alternative to the warm white of the overhead lights. For the next three hours I carefully unwound and strung the lights on the front façades of my main row of buildings, pledging to add another string to the block behind them once I build Assembly Square. Sixteen feet turned out to be longer than I expected, so after stringing the lights above the first floor (or in Europe, between the ground floor and first floor), I decided to run the wire around the HOTEL sign, up the side of the Pet Shop on the end, and under the eaves of the buildings until the wire ended at the Grand Emporium.

With my job complete, I turned out the overhead lights and turned on the LED lights. It looked amazing! I posted the picture on Instagram, and so far I’m up to nearly 300 likes and over 30 comments. 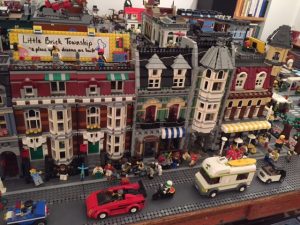 But then I put the overhead lights back on and turned off the LED lights. There were wires everywhere. They were an unsightly mess, especially at the upper level because the eaves of the various buildings are uneven and the wires hang like poorly strung telephone-pole cables. My solution, for the purpose of Lego photography, is to remove the battery pack on the roof of the Fire Brigade, wind up the upper layer of wires (which are not held down by wax as are the lights around the HOTEL sign) and store them and the battery pack inside the Pet Shop. It wouldn’t be difficult to restring that one layer when I need to.

This experience has made me think of the creative choices we make as writers and artists (and not just the choice I’m making right now to write this blog post rather than push through the 20 pages I have left on my novel revision). When we choose a first person point of view, for instance, it offers readers an intimate connection to our protagonist, but it also means that we can only present what our first-person protagonist sees, hears, and experiences. Conversely, we can tell our stories as an omniscient third-person narrator, but when everyone’s thoughts and perceptions are available at once, the story loses focus. With so many points of view, the reader may ask: Whose story is this? 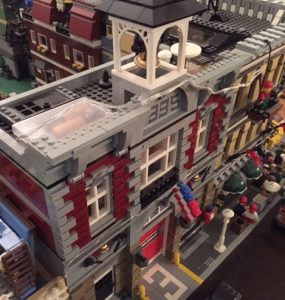 In addition, the more distanced the narrator, the more distance the reader will feel from the characters. It makes it that much more likely that the reader won’t connect with any character, and will therefore put the book down. But one often finds a potential first person narrator without the language or life experience to credibly tell the story. That was the case with my adult novel, Dirt Cheap, which I’d originally written in first person from the point of view of a young woman barely out of her teens and swept up in a series of events that she did not understand. After failing to find a publisher over the course of a year, I enrolled in a writing workshop and paid for a one-on-one tutorial. Among other things (like cut a major character), the tutor suggest I rewrite in third person from multiple characters’ perspectives. After two years of revision, the novel sold to the first publisher to which I submitted it.

Creative choices usually involve tradeoffs of some kind (except for the major character who contributed nothing to the story), and artists and writers need to be aware of what is given up as well as what is acquired. And like the effort I’m putting into moving my lights for photography, solutions to tradeoffs do exist, but they require effort as well.