Conversations on Diversity at VCFA 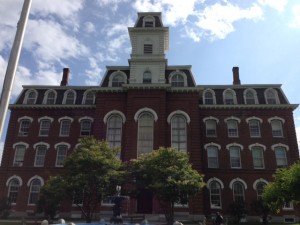 I just returned from almost two weeks at Vermont College of Fine Arts, where I served as a graduate assistant for the summer residency. Today, I sent my first semester students back home ready to work on their monthly assignments (called “packets” and including 10-15 books to read and annotate, two short critical essays, and 40 pages of new and/or revised creative work). Most of them will have to turn in their first packets sometime between August 3 and 10. It sounds like a lot of work, but I didn’t tell them that I have my own August 8 “packet” deadline that involves 237 pages of revised creative work — namely my second revision of SURVIVING SANTIAGO for my editor. I knew it would be a tight deadline, now made even tighter by the fact that I spent four days revising the first two pages. In my defense, the first two pages are generally very important pages in a novel. 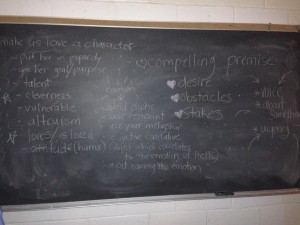 Notes on character likability from a workshop. This was the biggest craft issue I explored in my time at VCFA.

While I helped to introduce the first semester students to the process of VCFA’s low-residency MFA, much of my work consisted of helping the graduating students with their lectures. This was an especially gratifying task for me because this graduating class, the Allies in Wonderland (each class comes up with its own name), is the most culturally diverse class to graduate from the program. And while one or two lectures each residency focus on diversity — my lecture, for instance, advised writers on how to present protagonists and major secondary characters with disabilities — six graduate lectures (out of 25) explored diversity-related themes. Heidi Kim began the discussion with a lecture titled “Climbing into Culture: Narrative Approaches in Bicultural Stories,” which compared and contrasted protagonists who served as cultural interpreters, were “strangers in a strange land,” and/or were cultural chameleons. I was especially interested in what Heidi had to say because my protagonist in Gringolandia, Daniel, is very aware of his position as a cultural chameleon, while his sister who narrates SURVIVING SANTIAGO immigrated to the U.S. at a much younger age, so that when she goes to visit her family in Chile years later, she is very much a stranger in a strange land. 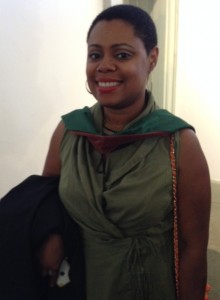 Ibi Zoboi, MFA, with her hood and diploma.

Two days later there were a pair of diversity-related lectures. LoriGoe Pérez-Nowak, who was in a workshop with me her first semester and my graduating semester had a very personal take on mixed-race identity in her lecture “Taking the Pulse on Identity: Writing Your Mixed Race/Mixed Heritage Character.” Following LoriGoe was Ibi Zoboi, the creator of the Brooklyn Blossoms Book Club, who lectured on “Brown Girl in the Ring: Magic for the Marginalized.” She writes speculative fiction and  her focus was on speculative genres (sci-fi, fantasy, magic realism) and how they are rooted in the mythology, folklore, and literary canon of communities of color. Following her lecture, Ibi and I talked about blogging, and she plans to explore these themes further, as well as diversity in children’s literature in general, on her soon-to-be-revamped blog. I look forward to her joining the conversation, which is ongoing with contributions by Zetta Elliott on Fledgling, Edi Campbell on Crazy Quilts, and the folks at Rich in Color, among others.

Lynn Joseph has always been a favorite author of mine, and her award winning novel from 2000, The Color of My Words stands out in its portrayal of a young girl becoming an activist to protect her community in the Dominican Republic from a developer backed by a corrupt government. Her lecture, “Closing the Gap: Finding the Heart & Truth to Cross Racial/Cultural/Language Barriers for Authentic Multicultural Storytelling,” described her research process for that novel. Cuban-American author Pablo Cartaya (another who had published even before entering the VCFA program) showed us how we can mix languages and code-switch effectively in “Weave the Language, Bring the Colores: Considering the Multilingual Approach in Writing Your Stories.” The final graduate lecture of the residency belonged to Christina Fernández-Morrow, “Avoiding Maria Moments: How to Write Believable, Relatable Latina Characters Regardless of Your Ethnic Background.” 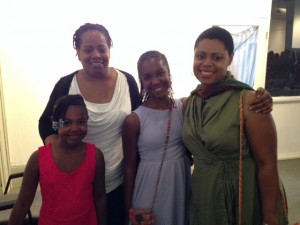 Ibi Zoboi celebrates her graduation with her daughters and former advisor Coe Booth.

This afternoon, the 25 Allies in Wonderland received their MFA degrees, and for their class gift, they endowed a scholarship to help fund the education of up to two writers of color each semester who enroll in the VCFA program. Their generous gift goes a long way to expanding the pool of children’s authors of color who can write from the inside. Rated the number one low-residency program for children’s writing, VCFA prepares writers with an emphasis on craft and process, and graduates have the inside track when it comes to submitting manuscripts to agents and publishers. Thus, the graduating class’s gift and the knowledge base created by these lectures represent concrete measures to attain the goal of #WeNeedDiverseBooks — stories about all our children, written by authors who come from their communities.