I’ve been away from the blog for a while first at the AWP (Association of Writers & Writing Programs) conference in Washington, DC, and then laid up with a nasty cold that should be better by now but is not. As promised (or threatened) in a previous post, I spoke on two different panels, one that I helped to write titled “Contested Histories: Portraying the Complexity of the Past for Teen Readers,” and one sponsored by We Need Diverse Books titled “Celebrating Children’s Literature.” The WNDB panel was a panel discussion, with questions from the moderator, WNDB co-founder Ellen Oh on the importance of children’s literature, the importance of diverse children’s literature, dispelling common myths (children’s books are easier to write than adult books, bad representation is better than no representation, etc.), and the urgency of diverse children’s literature in today’s political climate. A reporter from Publishers Weekly attended that session and will be writing up the discussion. Link to follow! 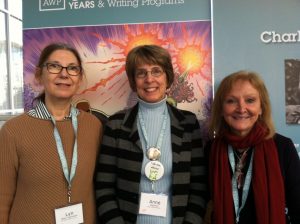 The Contested Histories panel, on which I spoke with Ann Angel and A. B. Westrick, took a more scholarly approach — what AWP is known for — and each of the panelists wrote up a presentation, with PowerPoint, followed by audience questions. Our audience seemed to appreciate our presentation. None of the 30 people in attendance left part-way (always a good sign!), and they had more questions than we had time to answer in the session. Many stayed afterward to talk with us individually. And the extra copies of my talk that I brought to accommodate hearing-impaired attendees were all snapped up, leading me to believe that people wanted to keep and reread what I had to say.

These kinds of things only encourage me — like leaving food out for a stray cat that will then return to your doorstep every night. So in case you were unable to attend the session, but were there but didn’t get a copy of my presentation because I only brought three and then gave away my personal copy, here is “Contested Histories: International Perspectives.” I’ve split the talk into two parts to avoid the dreaded tl;dr (too long; didn’t read). Part 2 will appear on Wednesday. 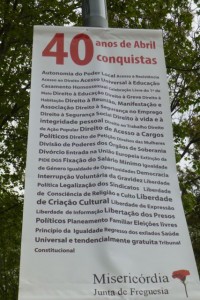 A list of human rights and other victories gained following the Carnation Revolution.

Three years ago I received a grant from the Luso-American Foundation to write about, among other things, the fortieth anniversary of the Carnation Revolution, the military coup that ended, with minimal bloodshed, 48 years of right-wing dictatorship in Portugal. The fortieth anniversary was intended as a celebration of freedom, and books and films released around that date portrayed cold, brutal dictators and secret police officials, heroic military and civilian leaders, and an outspoken musician whose song became the anthem for the revolution…as it remains today as an anthem for those protesting austerity throughout Europe.

Coming from the United States, with its own historical orthodoxies surrounding the twin beliefs in capitalism and democracy, two things surprised me as I continued to research Portugal’s dictatorship and revolution by reading books and essays in Portuguese and attending various public events. 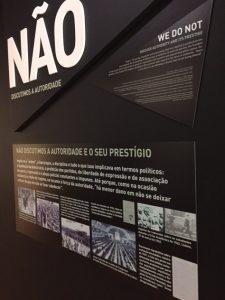 A poster at the Museum of Resistance and Liberation in Lisbon celebrating authoritarian rule under Salazar. “We do not debate authority and its prestige.”

One was the persistence of support for the dictatorship known as the Estado Novo and for its leader, António de Oliveira Salazar. To a significant minority of scholars, Salazar was a brilliant leader who maintained law and order and the central role of the Catholic Church for nearly five decades. According to this view, ever since his death in 1970 four years before the revolution, the country’s trajectory has been straight downhill. These right-wing scholars cite a loss of faith and morals (as exemplified by low church attendance, the legalization of same-sex marriage, and the decriminalization of drugs), the loss of the country’s African colonies, widespread official and personal corruption, and a dead-end commitment to a globalized society and economy via the European Union.

The other thing that struck me was the key role of communists, many of whom occupied positions in the military, in the restoration of constitutional democracy in Portugal. While the post-revolutionary government replaced hardline communists with social democrats, communists carried out the most dangerous work of what turned out to be a democratic revolution. Growing up during the Cold War, I had learned that communism and communists were the enemy, what former President Ronald Reagan called the “evil empire.” Whenever they took over, they crushed both individualism and democracy. They never gave up power. 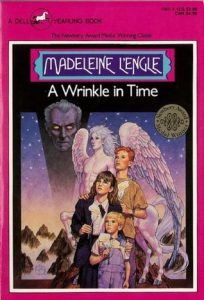 As a child and teenager, I read stories where the heroes believed in the twin orthodoxies of capitalism and democracy and the villains were either fascists or communists. Among them was Madeleine L’Engle’s A Wrinkle in Time, in which Meg’s father is a prisoner on a collectivist planet called Camazotz—a metaphor for communism—and the intrepid teens must use their individual wits to rescue him. But the good vs. evil dichotomy breaks down when we look at the Second World War, where the United States and the Soviet Union fought side-by-side. And the majority of historical novels set in Europe that I read as a child were ones in which Nazis were the villains. 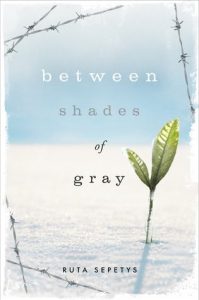 Reading Ruta Sepetys’s appropriately titled young adult novel Between Shades of Gray drove home for me the notion of a contested history—the idea that one side wasn’t all good or all evil, and that people can have opposing and valid interpretations of events based on their own experiences. Given my study of history—and the fact that my own Lithuanian Jewish ancestors fled their neighbors’ violent anti-Semitism for new homes in the United States and Argentina—I approached Sepetys’s groundbreaking novel set in Lithuania in 1940, on the eve of the Nazi invasion, with great skepticism. We Eastern Europeans bear long grudges, and it didn’t help when I read in an interview that her direct ancestors escaped Lithuania to the United States via Nazi Germany. However, Sepetys’s novel, based on a real family story, opened my eyes to 15-year-old Lina, and her parents, sibling and neighbors who, despite their prejudices against my people and against their less fortunate fellow citizens, did not deserve the horrific fate they endured at the hands of Joseph Stalin and the Red Army. The truth is, nobody deserves to be brutalized, and the power of the novel is that it can create empathy with people whose backgrounds, experiences, and beliefs are very different from ours. 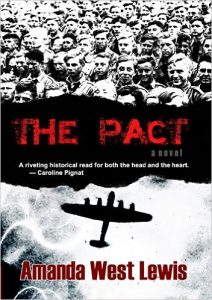 And people can change. Amanda West Lewis’s recently published young adult novel, The Pact (just named to the USBBY list of Outstanding International Books) follows Peter, a boy growing up in Nazi Germany, from age ten in 1939 to age 16 in 1945. She builds a bond between him and the reader even though he turns his back on a Jewish friend, and embraces Nazism enthusiastically to prove his strength, courage, and manhood after failing to save another friend from drowning. Ultimately, Peter’s journey, like Lina’s, becomes one of basic survival as well as of helping his mother through endless waves of deprivation and terror. Only after the German surrender, when the victorious Allies force him and his friends who have joined the Wehrmacht to watch footage from the concentration camps, does Peter come to realize that he has not only been party to crimes against humanity, but he actively chose to do so. Like Between Shades of Gray, The Pact is based on a real story, that of Hans Sinn, who after the war moved to Canada and has devoted the rest of his life to the cause of peace. 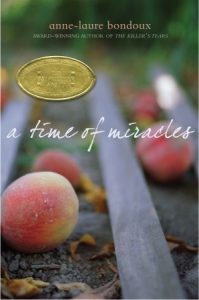 There is a saying that “one person’s terrorist is another person’s freedom fighter.” A young adult novel that explores a people pushed to the edge of desperation and helplessness, turning to acts of terrorism is Anne-Laure Bondoux’s Batchelder Award-winning A Time of Miracles, translated from the French by Y. Maudet. Blaise is a refugee, smuggled to France by Gloria, the woman who allegedly rescued him from a train derailment when he was a baby and raised him with bravery and love as the Soviet dictatorship imploded and breakaway republics such as her native Georgia descended into chaos and ethnic violence. But amidst the cruelty around her, Gloria is not an innocent, and her protection of the young boy hides deep wounds and a dark secret. In a murky, contested history, heroes and villains can be on the same side, and goodness emerges not from ideology or ethnicity but from relationships with the people around you, and how far you will go to save a life.