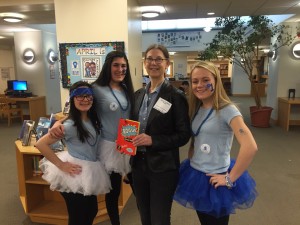 Ten days ago I spoke to groups of sixth through eighth graders at Hommocks Middle School in Mamaroneck, New York. Sponsored by the PTA for Autism Awareness Month, I talked about my inspiration for Rogue and the events in my own life that made their way, in one form or another, into the novel. Because student attendance was voluntary — they would have to attend during their lunch period — I decided to include slides of my Lego township as a draw.

My tactic to bring in students worked beautifully! I was told to expect around 30 students per lunch period. During the first lunch period in which I spoke, 95 students, mostly sixth graders, showed up. Around thirty came for the second lunch period, and my third and final presentation brought in around 50, for a total of 175 students in all — an impressive turnout. They were a wonderful audience — enthusiastic, involved, and with great questions that ranged from whether I found adults to help me deal with bullying to my experiences studying foreign languages to how long it took me to collect and build my town. 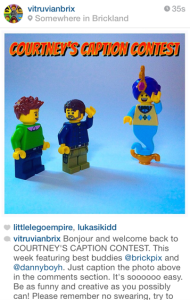 Along with stories, various prominent Instagram photographers and joint accounts hold contests for writers and photographers.

The students were aware of the autism spectrum and eager to listen to personal experiences. I told them about some of the difficulties I faced at that age — as does my protagonist, Kiara — and how things improved in high school as many of my peers pursued their interests and came to respect me for my unusual activities, which included DJ’ing for a community radio station.

I enjoyed sharing interests with the students, many of whom were also fans of Lego, aspiring authors, and/or world travelers (including two groups of English language learners). I showed them how I dramatized scenes from published books and wrote my own stories using Lego settings and minifigures. I also introduced the process of collaborative storytelling. 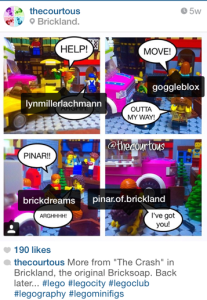 In recent months, I have been involved in a collaborative storytelling project on Instagram that involves several dozen people who live all over the world. The central figure of this group is Courtney, aka @thecourtous, who lives in the UK. I first got to know Courtney’s work when he did a Lego recreation of Roald Dahl’s classic Charlie and the Chocolate Factory. Since then, he has built his own Lego town named Brickland, and has populated it with various other Lego photographers’ signature figures, called “sigfigs.”

I was honored when Courtney invited my sigfig to move to Brickland. My laid-back hippie, “Lyn,” best known on Instagram for coming in last place in the Chef Central competition and still having a good time despite her poor performance, now works at the flower stand. However, in his episode titled “The Crash,” sigfig Lyn (who I call Siggy in Little Brick Township) was one of several victims of a runaway car. For almost a week, I didn’t know whether she would survive, so my own Lego people weighed in on the events. Among them was Lego Mayor Bill de Blasio, who suggested that Brickland adopt his Vision Zero program to reduce pedestrian fatalities from moving vehicles. 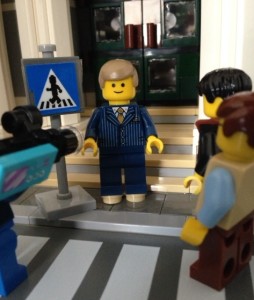 Fortunately, my sigfig survived along with the others injured in the crash, though a pregnant Leija lost her baby.  She returned to Little Brick Township wearing a cast that her Brickster friends signed. More recently, an evil impostor has been buying up and expropriating Brickland property and when Lego Courtney tried to stop him, the evil LL World (@llworld, who makes Lord Business look like a nice guy), struck him in the head with an iron skillet. All of the participants in the story are awaiting the result of this epic struggle, and we are commenting on each episode and/or creating our own scenes that present the events from our sigfigs’ perspectives. 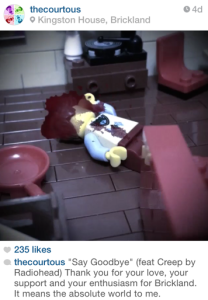 After the attack by LL World.

Much like its close cousin, fan fiction, collaborative storytelling is a fun, interactive way of telling stories. It’s also a great way of meeting and sharing interests with people who live in different places throughout the world. The participants in the Brickland episodes live in the US, Canada, England, Ireland, Turkey, the Philippines, Australia, and New Zealand. Some of the participants have met in person, as I did when I visited Shelly Corbett (@xxsjc) and three other toy photographers (@wiiman, @dinoczars, and @bricksailboat) in Seattle last year.

If you have Instagram, check out @thecourtous and Brickland to see for yourself. Join in the fun and create your own stories with friends old and new. 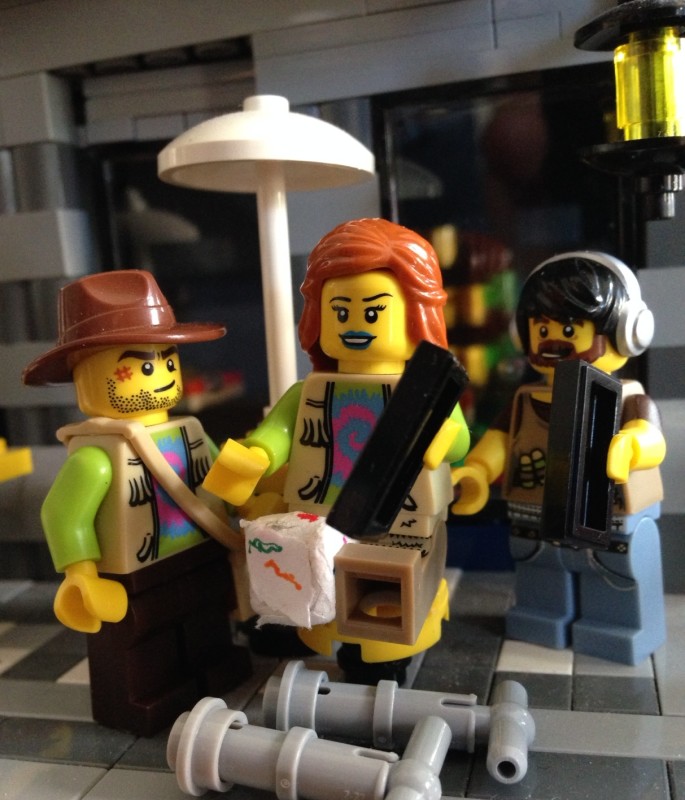 Siggy, her brother, and Ernesto eagerly await the next episode of Brickland. Will we see @thecourtous alive again?