Checking on Those New Year’s Resolutions

Another year has come and gone, and now that we’re about to enter a new decade, it’s time to check in on last year’s New Year’s Resolutions. I’ve become infamous for my high noncompletion rate, but rather than quit trying altogether, I decided to downscale my ambitions to something more attainable. I realized that it had to be something within my own power to accomplish, specific, and measurable. In previous years, I’d narrowed my focus to one resolution, which led to a 0% completion rate. In 2019, I chose three, hoping to close out at least one. 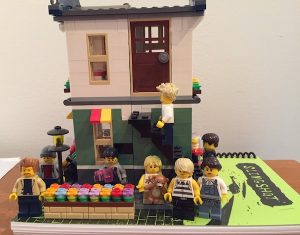 My Bricksters are witness to my past failures and current promises.

I’m proud to announce that I achieved two of my three 2019 resolutions. I completed one relatively early in the year — finishing the Lego Houseboat MOC that had been sitting on my living room table gathering dust. The MOC made its debut on this blog at the beginning of August, after I resolved a design issue, and has been getting great reviews ever since. The Lego Houseboat MOC is, in fact, my first successful New Year’s Resolution in many years, and it spurred me to work harder on fulfilling one of my others.

The third 2019 resolution felt like a bit of an afterthought when I added it to the blog post. It was to dust off Little Brick Township at least once a month, and by midsummer, I hadn’t kept to that schedule. Maybe once every other month. However, by then, we knew we’d be moving to a new apartment 14 blocks away by the end of the year, and I wanted to start afresh with a clean town. So beginning in August, I dusted more regularly and whenever feasible, washed my constructions in warm soapy water before shrink-wrapping them, boxing them up, and transporting them to the new place, still under renovation, via my dear departed heavy duty granny kart. 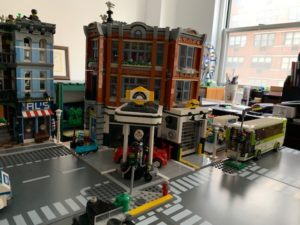 Just completed: The only gas station in Manhattan south of 14th St.

Now that Little Brick Township is set up in its new home, it’s a lot easier to keep it tidy. The new place is on a higher floor with not quite as much traffic below, so it’s less dusty. There’s more space to walk around. And I invested in a set of paintbrushes of various widths, which won’t be used for painting but for cleaning between the studs where dust collects. So even though I didn’t consistently keep my town clean, I finished strong and it looks great at year’s end. Count it! 2 for 3!

I did have one failure. I didn’t finish my YA verse novel set in Portugal in 1967, EYES OPEN. In fact, I didn’t open the file all year long. That’s bad. On the other hand, I’ve written eleven poems for another historical novel in verse for middle grade readers, set in Brooklyn, New York, in 1982. That novel, MOONWALKING, sold on proposal at the end of August, when my co-author, Zetta Elliott, and I sent via our respective agents three poems each along with a two-page synopsis and detailed table of contents. The deal was announced almost three weeks ago, and it was really hard to keep the news a secret for all those months.

In addition, I had another project in the first half of the year that preempted EYES OPEN. While I’d written about focusing my creative energies on things I can control — which meant leaving “find a new agent” and “sell one of my considerable inventory of finished and in-progress manuscripts to a publisher” off the list — I worked really hard in 2019 to make those out-of-my-control things happen, even if it meant facing rejection, negative judgement of writing skills I’d worked hard to develop, and exposure of my original ideas to a cutthroat marketplace. In the process I learned a lot of valuable lessons that I hope to share in the new year.

With all this free space, I’ve built a shore and body of water for Little Brick Township. Maybe posting more Lego pictures should be my New Year’s Resolution.

With a deadline looming, I’ve thought hard about new New Year’s Resolutions, and I’m torn between setting goals of varying levels of difficulty or resting on my laurels, because given my past record, 2 out of 3 isn’t bad.