I’ve been busy with interviews and guest posts for the past month or so, but things seem to be quieting down. Not sure whether or not that’s a good thing, but I’m hoping to meet people and organize another blog tour when I go to the American Library Association’s annual conference in a couple of weeks. This time, I’ll pack comfortable flats. I learned my lesson three years ago when I wanted to dress up for an event organized by the Young Adult Library Services Association to honor those whose books had appeared on YALSA’s distinction and awards lists, in gratitude for Gringolandia being included. Unfortunately, on my way to the event, I fell off my high-heeled shoes and badly sprained my foot.

I did find some time to revise the 16-page short story that I wrote for my Portuguese class in the spring. The good news is that my professor liked the story a lot and gave me thorough and useful comments, not only on the grammar and word usage but also on the story itself. The bad news is that she suggested I not continue writing the rest of the novel in Portuguese but switch it to English. Here is the reason why: 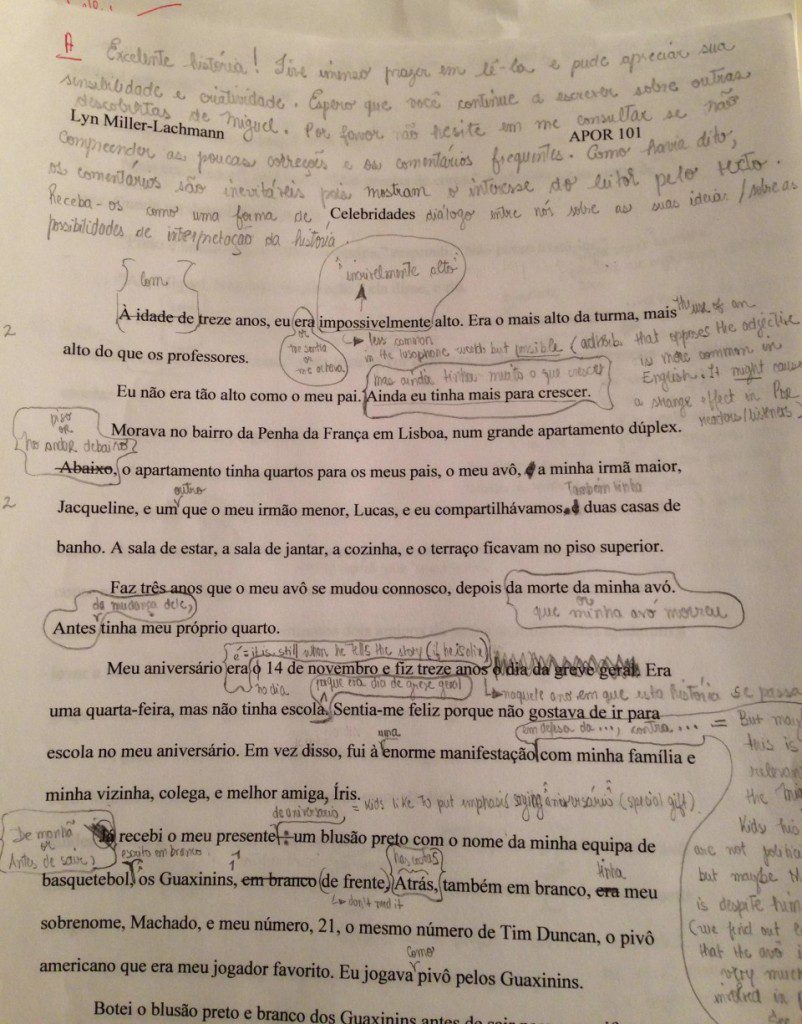 Yes, that’s an A at the top of the page, but the corrections on the first page are pretty typical of those on the other 15 pages. Professor Danielle spent a lot of time working on my story, so much so that the other students in the class had to wait several extra days to get their grades. Sorry, guys!

My reasons for wanting to write the entire novel in Portuguese were twofold. First, I wanted to capture the way my characters think, and language is so integral to one’s understanding of the world. Second, I wanted to reach another audience with my writing, especially since my husband and I are seriously thinking of moving back to Lisbon for the medium- or long-term.

That said, I’m not sure that I have any business writing a novel in a language when I’m still using a two-way dictionary. And because I was going back and forth with the dictionary, it took me about three times as long to write this story as it would have taken in English. My plan now is to find beta readers for the short story in Portuguese, while creating a version in English and continuing with the English version until I have a middle grade novel.

Plans may change, though. I’ve signed up for another Portuguese class in the fall…