Categories Menu
Home » Blog » “Burn It All Down”

“Burn It All Down”

I’ve been away at a writing retreat this week, one with limited access to phone and internet. The idea is to focus on our work-in-progress, not on social media, the news, or our day-to-day problems. The last of these has been hard for me because Tuesday afternoon while I was traveling to the retreat, my now-14-year-old Bichon Frise, Charlie, was undergoing emergency surgery. Fortunately, the little pooch came through the operation without complications and is recovering well at home, the stiches protected by a “cone of shame” that he must wear for the next week. 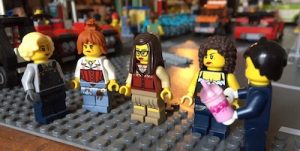 Before Charlie’s sudden illness over the weekend and subsequent surgery, the news intruded on my work. Like most of the writers with whom I’m in touch on social media, I was appalled at the refusal of so many senators to believe the courageous Dr. Christine Blasey Ford and the other women who identified Supreme Court Justice candidate Brett Kavanaugh for acts of sexual assault while intoxicated. Kavanaugh’s own promises to reward friends and persecute opponents poses an even greater threat to the rule of law; after all, the Supreme Court’s decisions are absolute, not subject to further judicial review except by a different Supreme Court years down the line. Feeling helpless in the face of raw power, many of the women writers talked about writing stories featuring young female protagonists who start fires in the name of justice. I, too, am working on a novel in which characters start fires. I don’t know how many of these books, inspired by current events but in a variety of genres (fantasy seems to be especially popular) will be finished in the next year or when they are finished will find homes in traditional publishing. I hope that the diminishing of our political rights with the ruling party’s capture of the Supreme Court and the rest of the federal judiciary will not be followed by a chill in freedom of expression. I also think that the upcoming Congressional elections will play a major role in determining how much space will remain in the US for opposition and dissent.

My own work-in-progress is not the first book, though, in which my protagonists set fires to oppose a brutal regime. My favorite scene in Gringolandia – and one of my favorite scenes that I’ve written overall – comes toward the end of the book when Daniel and Courtney, having smuggled his father into Chile to continue the struggle against the Pinochet dictatorship, attend a women’s march in Santiago. Because it’s a women’s march, Courtney is the only one who marches, but, as I described on Twitter, this is a case of boys doing the right thing:

The problem is, she really stands out—not a good idea. I call her over.

“You’re too blond,” I tell her. “It’s blinding.” I hold out my cap. The guys at the record store yesterday talked me into buying it. It’s reggae colors—red, yellow, black, and green. She shakes her head and gives me a thumbs-down.

“Meet me here in two,” she calls out in English.

The women parade off in a thick crooked line that reminds me of an alligator’s tail. I duck into the market. There are fresh food stands with meat and vegetables, but late in the day, the pickings are slim and some of the seafood has gone rank. In another part of the market are stands with T-shirts of characters from old Disney movies, cheap plastic toys, rubber soccer balls, cassettes from Brazilian pop groups, bestsellers translated from English. Many of the people working there are children.

The skinny, ragged kids depress me. I leave, cross the street, and make my way to a traffic circle. The stiff breeze lifts the dreads sticking out from under my cap, blows them in my face, slaps them against my glasses. A group of men are dragging what look like cardboard boxes and wood scraps into one of the streets off the circle.

I watch for a few minutes. The crowd of men grows. They’re rolling tires toward the pile.

In an instant, I switch off my English-speaking brain. I pull alongside them. “¿Qui’ubo, cabros?” I ask.

“The milicos are going to attack the march. Help us.”

Attack the march—where Courtney is. Where the mothers and grandmothers are.

There’s a hole in a fence. I rush through it into a población of cardboard and plywood houses with tin roofs. My feet slide in the mud. It rained a little while Courtney and I were sleeping, and it looks like it’s going to rain again.

“Here, take this,” a man tells me. He has long, stringy, gray hair that reminds me of Papá’s before I shaved it off. I raise a warped and rotting sheet of plywood over my head, carry it past the fence and into the street. I haul out more plywood, cardboard, pieces of cement, rocks. The barricade grows. It’s already over my head by the time I hear the roar of trucks in the distance.

I glance up. A bearded man sitting atop the barricade nods in my direction. There are several people around me, but I’m pretty sure he’s gesturing at me. “You got a name?”

“You have strong arms, Rasta. Throw me the rocks.”

I toss the rocks and cement chunks, one by one, to the man, who calls himself El Tigre. Behind him, a group of kids are soaking the barricade in gasoline. The first drops of rain hit the cobblestone street. The roar of vehicles grows louder.

I can’t see how close the army trucks are because of the giant wall in front of me. El Tigre flings rocks. Another man climbs up as well, his sneakers slipping on the gasoline-soaked boards. Raindrops bead on the surface of the wood.

I step farther back. Three men now throw the chunks I pass them. A smoking canister flies over the barricade. Tear gas. I pull my scarf over my face like the others do. El Tigre tells us to stay upwind. I hear shots.

“Get down!” someone calls.

The men slide down the barricade. From behind the fence, boys run out holding bottles filled with clear liquid and stuffed with cloths. A man tapes the mouths of the bottles.

“I’m getting them!” the man cries. His hands shake as he cuts the duct tape with a small knife.

“I’ve got it,” I tell him. I take the roll from him and tear off pieces of tape. He goes back to sealing the bottles.

El Tigre takes out a plastic lighter. I pick up the first bottle. My muscles are tight. This is for Papá, for what they did to him. This is for the soldiers, who dragged me out to watch. This is for Jaime and the professor, for Cándido and El Gato Negro.

This is what Rodrigo Rojas saw on the day the soldiers burned him to death.

He lights the rag taped to the bottle’s mouth. I wait for the rag to burn, good and strong.

I wind up, let the bottle fly. My arm hangs in the air.

I hear the crash, then the explosion as the barricade ignites. Like the opening chord, igniting the crowd. “Yahhhh!” I yell. I leap into the air, my arm raised, my fist clenched.

More bottles fly. More explosions. The barricade is engulfed in flames. The blast of hot air blows away the chill inside me. Sweat mixed with rainwater rolls down my face and neck. Tear gas canisters fly overhead. A couple of them hit the flaming pile and blow high into the air, above the black smoke.

We run. Some of the men scatter into the población; others dash up the street to warn the women still in transit. I join a bunch racing toward the market where the march is supposed to end. We have to make sure the women get home safely.

Next year will be the tenth anniversary of Gringolandia’s publication. Although its original publisher, Curbstone Press, closed shortly after the book came out, Northwestern University Press has continued to keep it in print and now sells an e-book edition. When I originally wrote the novel, I wanted to call attention to the impact of torture and political oppression on families and communities. Today, as the siren song of authoritarianism grows louder around the world, books like Gringolandia that capture life under a fascist regime and the sacrifice necessary to restore democracy, freedom, and human rights, are more important than ever.