Categories Menu
Home » Blog » Another Star for Translation, and a Bookends Panel

Another Star for Translation, and a Bookends Panel

Ever since I moved to New York City in 2015, I’ve looked forward to the Brooklyn Book Festival, held each year on a weekend at the end of September. I presented on a translation panel my first year in the city, and since then have attended other people’s panels that I turned into blog posts (here and here). This year I’m back on stage, as part of the Bookends events that take place during the week of the festival and that now include venues in the other four boroughs.

This Friday at 6 pm I’m part of a panel at Deutsches Haus on the NYU campus titled “Translating Visual Stories: Graphic Novels, Comics, Picture Books, and Illustrated YA.” I’m covering the picture books. Joining me are Sandra Smith, who translated the graphic novel of Camus’s The Stranger: CJ Suzuki and Kristi Fernandez, scholars and translators of Japanese comics; and Lucas Zwirner, a publisher and translator of illustrated novels from Germany for teen readers. The panel is co-sponsored by Deutsches Haus, the PEN Translation Committee, the PEN Children’s and Young Adult Books Committee, and DAAD — the German Academic Exchange Service. The description of the panel reads:

Stories that combine text and illustration are growing in popularity. Some of the most interesting and innovative work is coming from outside the US and translated into English. Panelists will talk about translating graphic novels, comics, picture books, and illustrated YA books and how both text and visuals change when adapted to a new language and culture. We’ll focus on Japan, a pioneer of comics and graphic novels, Western Europe, where edgy stories dominate and refugees give voice to a more diverse continent, Germany, and the attempt to re-frame a beloved YA classic for a U.S. audience, and Brazil, with its unique picture book illustrations.

My presentation will focus on the picture book THE PRESIDENT OF THE JUNGLE, launching on January 7, 2020, and I am pleased to announce that it has received its first review — a star from Kirkus! The unsigned Kirkus review concludes:

…the words and pictures bring to life a democratic election that is stripped of acrimony, divisiveness, and ignorance and is instead full of engagement, discussion, and earnestness—but not sappiness. Young readers are introduced to the idea of an engaged electorate, a concept whose empowerment will hopefully stay with them as they age.

A fun, lively, accessible primer on the democratic process (good for weary adults, too).

Kirkus is notoriously picky, so a starred review is a special achievement, something I’ve only attained once before, for my translation of The World in a Second. Lively, innovative illustration often is what lifts a picture from the ordinary positive review to a star, allowing the book to stand out in the eyes of librarians and educators who are Kirkus‘s principal audience. 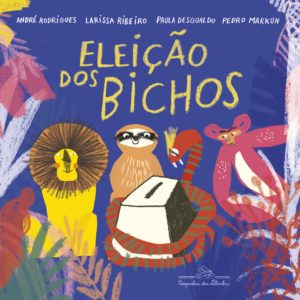 The title of the Brazilian edition translates to “Animals’ Election.” The U.S. edition has a brighter cover and eight fewer pages.

One of the great things about publishing international picture books in translation is that it brings the work, and diverse styles, of visual artists around the world. Brazil is one of the places where children’s book illustration has flourished, as shown by Roger Mello’s winning the IBBY Hans Christian Andersen Award for illustration in 2014, the youngest person at the time to win this prestigious award given by the International Board on Books for Young People. Mello’s influence is evident in the work of the four-person collective (André Rodrigues, Larissa Ribeiro, Paula Desgualdo, and Pedro Markun) who created Eleição dos Bichos — a title we changed to THE PRESIDENT OF THE JUNGLE to play off Lion as “King of the Jungle” and to tie in with our own presidential election season in 2020.

If you’re in New York, I hope you’ll join us at Deutsches Haus for this panel discussion. I promise a report afterward, as well as a progress report on THE PRESIDENT OF THE JUNGLE as it makes its way into the world.