Ai Weiwei vs. The LEGO Group: Are Multinational Corporations the New Big Brother? 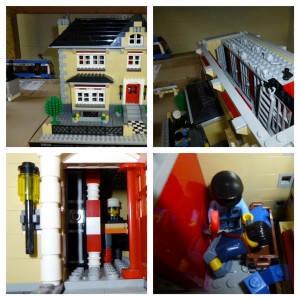 I created Dirty War House to accompany my novel Gringolandia, showing the type of secret prison that existed during the dictatorship.

Yesterday afternoon I received a Facebook message from Anne Verhoijsen, a Dutch artist who invited me to contribute one of my LEGO creations to an exhibit on human rights in Alkmaar, a town outside Amsterdam, in December. She linked to this article in the Guardian, about The LEGO Group’s decision to deny a bulk order to the Chinese dissident artist Ai Weiwei for an upcoming exhibit in Melbourne, Australia. Ai has already shown a collection of LEGO mosaics at Alcatraz Island, depictions of notable human rights activists including Nelson Mandela and a fellow Chinese dissident, imprisoned writer Liu Xiaobo.

According the the article, LEGO denied Ai the bulk order on grounds that it “cannot approve the use of Legos [sic] for political works.” While in theory Ai can obtain the pieces via third-party sites like Bricklink, doing so adds time and expense when he is probably rushing to finish in time for the installation in Melbourne. (I don’t know this, but if he’s like most creative people, he’s rushing to finish at the last minute.) In addition, if the company disapproves of its product being used to make political statements, Ai and his Melbourne hosts could receive a cease and desist letter.

And so could I. After reading the article, I had to make the choice whether to keep my “Dirty War House” piece in the Alkmaar show or withdraw it. What a chilling effect these corporate actions can have! 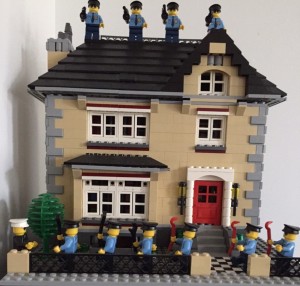 My answer to LEGO’s refusal to sell bulk bricks to Chinese dissident artist Ai Weiwei on grounds that it “cannot approve the use…for political works.”

My response, like the response of my Instagram mentors @legojacker and @pulup, was to post a political commentary using LEGO pieces. I featured the outside of Dirty War House and noted the preponderance of police officers in the City-themed sets. In response to several commentators, including two who didn’t agree with me, I discussed some of my concerns about the corporation’s actions.

Ai suggested that LEGO’s refusal stemmed from the new Legoland under construction near Shanghai, as well as a new multimillion-dollar factory in China. In fact, The LEGO Group doesn’t own Legoland, having sold the parks and the right to build more to the UK-based theme park operator Merlin Entertainment. But it appears that the corporation has decided to pick and choose what kind of “political” speech it wants to promote, allowing its name and products to be used in a theme park in a notoriously repressive country (one which, by the way, blocks this website) while preventing dissidents from that country from buying its products.

Furthermore, in preventing customers from using its products in a “political” manner, the company is setting itself on a dangerous path. The Koch Brothers own paper mills. What’s to prevent the corporation they own from denying paper, by refusing to sell it or sending cease and desist orders, to publishers of books and newspapers with ideas they don’t like?

Multinational corporations are not democracies. They are not bound by the same standards of free speech that democratic governments are, and they have the ability to act aggressively to curtail free speech. In the past, corporations have sued and bankrupted community activists (in the United States and elsewhere, these are known as SLAPP suits, Strategic Lawsuits Against Public Participation), fired and blacklisted employees for speaking their minds or trying to organize a union, and used unlimited campaign donations to install or coerce public officials to do their bidding.

Could corporate CEOs become the dictators of the future? While this incident with Ai Weiwei may seem like a “tempest in a teapot,” as my friend Shelly Corbett wrote on 100% Stuck in Plastic, I hope it raises awareness of the power of multinational corporations and why we need to take back some of that power through individual and collective acts of free speech. And we need to push our local and national governments to do the same.

[Update: This article from the New York Times shows some of the steps Ai’s supporters have taken, as well as other censorship efforts, successful and unsuccessful. One of them, is very close to my project — and fortunately, the artist won in the end.]