Categories Menu
Home » Blog » A Museum for the World to See

A Museum for the World to See 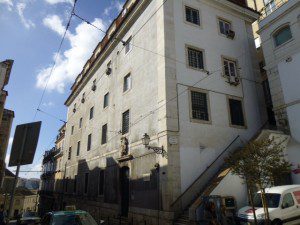 The site of the former Aljube Prison in 2012, after the “A Voz das Vítimas” exhibit.

In 2011 – a year before my husband and I first lived in Portugal – the Fundacão Mario Soares, named for a former pro-democracy activist and Prime Minister, sponsored an exhibit at the site of the former Aljube Prison in Lisbon. Titled “A Voz das Vítimas” (The Voice of the Victims), the exhibit featured photos and testimonies of Salazar regime opponents who were imprisoned there. Among them were Agostinho Neto, a leader of Angola’s independence struggle and one of Amnesty International’s first Prisoners of Conscience. The exhibit closed long before I arrived, but I saw the catalog and read the testimonies of Neto and dozens of other prisoners incarcerated at Aljube before being sent to other prisons (including the Tarrafal Concentration Camp in Cape Verde, where so many died of starvation and disease) to serve their sentences. 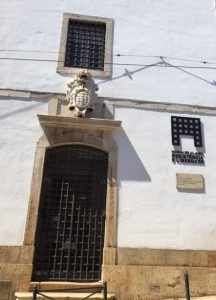 The exterior of the former prison today.

In the following years, which included the fortieth anniversary of the Carnation Revolution that ended the dictatorship, it became clear that Portugal needed a museum to convey what used to happen to people who spoke out against repression. In April 2015, the Aljube Museum of Resistance and Liberation opened in the former site of this notorious prison, which closed in 1965, after several demonstrations and high-profile escapes.

Aljube Prison was located across from the Lisbon Cathedral, along a busy streetcar line and in front of a residential courtyard. From 1928 to its closing in 1965, the prison inspired fear in anyone who walked or rode past it, and that fear pushed many into silent obedience, lest they or their family members be dragged through the black-painted doors in the middle of the night. Aljube gained notoriety for its isolation cells, called “curros” or “gavetas” – windowless cells barely large enough for a single bed inside slightly larger cells that gave prisoners the sense that they would never be seen, heard, or found again. Left all alone, prisoners were kept awake day and night by loud bells that went off at unpredictable times. I had the opportunity to sit inside one of those cells — a replica because the dictatorship ordered the original cells destroyed after the prison closed — and I think for most people it would be a terrifying experience. Other outstanding features of the museum include life-size models of resistance activities – secret printing presses, a typewriter placed inside a box to muffle the sound, a woman nervously checking the street from a window while a group of men behind her hold a meeting — and actual files of the secret police, the PIDE. 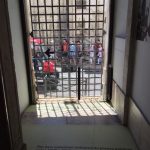 The entrance through which prisoners were brought to Aljube. 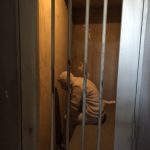 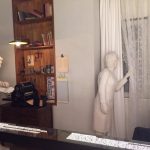 Along with exhibits of repression and resistance, the museum includes clips from one of dictator Salazar’s most famous speeches, a 1936 speech in Braga titled “As Certezas” (“The Certainties”) where he states that one does not discuss or question “God and His virtue,” “authority and its prestige,” “the glory of work and its duty,” “the family and its morals,” and “the Fatherland and its history.” The exhibit contrasts these “truths” with the reality – the mistreatment and exploitation of workers, the taking of beggar children from their families and institutionalizing them along with sex workers and criminals, the lack of schools and high rate of illiteracy, the lack of any rights or independent lives for women, the portrayal of kings, nobles, knights, and clerics as the only ones who mattered with ordinary people having no more status than beasts of the fields. 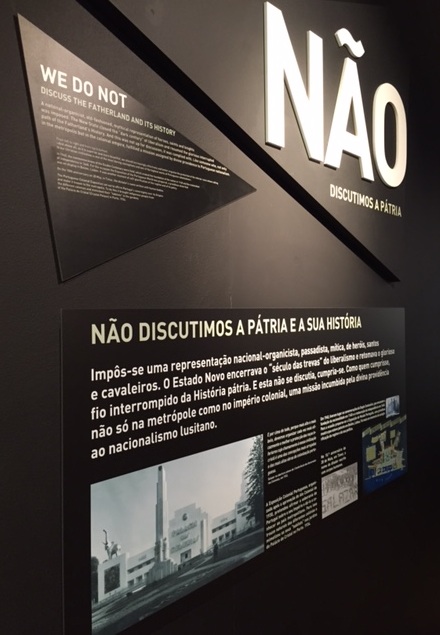 One of the “certainties,” about which the dictatorship did not allow debate: the country’s history. 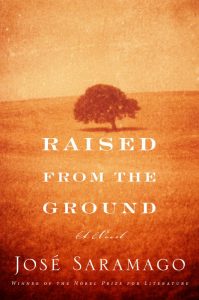 A fairly long movie clip reenacts a 10-day interrogation session, with the sleep-deprived prisoner appearing ever more battered, and a succession of interrogators playing “good cop, bad cop” and other roles to break him down. The middle-aged man is an engineer who puts up a strong resistance, talking back to his torturers and ultimately being allowed to see a family member after not giving them the information they want. From this film and my other reading (including the powerful novel by Nobel Laureate José Saramago Levantado do Chão, available in English translation as Raised from the Ground), I learned that prisoners who refused to give any information to their torturers were in the end better off than ones who did, because once someone talked a little, they would be squeezed to give up more and more. I hope this tidbit of information is something none of you, dear readers, will ever have to use. 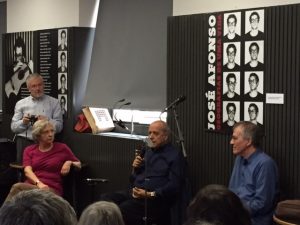 A panel and concert in honor of José “Zeca” Afonso featuring, from left, Irene Pimentel, Rui Pato, and Francisco Fanhais.

Special exhibits and events highlight individuals who played roles in the freedom struggle. I was fortunate to be able to attend a panel and concert in honor of José “Zeca” Afonso, the talented and intrepid fado singer and composer who became a popular protest singer and the author of the revolutionary anthem “Grândola Vila Morena.” Scholar Irene Pimental and fellow musicians Rui Pato and Francisco Fanhais shared their memories of Zeca, who died of ALS in 1987 at the age of 57, and played several of their favorites from his large body of work. The auditorium was standing room only, with many young people in attendance, thus keeping Zeca’s legacy alive for a new generation. 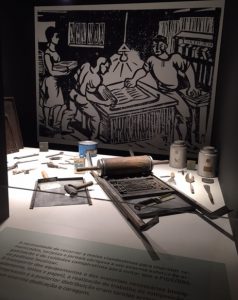 And that brings me to my final thoughts about this valuable museum exhibit. I first visited the Aljube Museum of Resistance and Liberation one month after its opening, and the exhibit was entirely in Portuguese. Even though I read Portuguese fluently, I left a comment that the exhibit should be translated, because the topics it covers go beyond the Estado Novo era, the Salazar dictatorship and the six years under Marcelo Caetano after Salazar’s illness and death. So many peoples around the world have shared the experience of living under unquestioned authority and impunity, repression, torture, extrajudicial execution, the rule of men rather than the rule of law, and the clandestine resistance of freedom-loving people who risk everything for justice, dignity, and human rights. 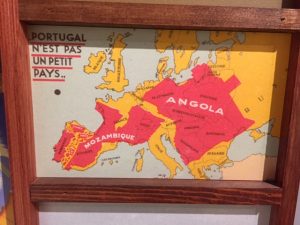 A poster from the time of the colonial wars, reading “Portugal is not a small country.”

The recent rise of the far right and other forms of authoritarian populism in Europe and the United States has given these concerns a new sense of urgency; if we don’t learn from the past, we are destined to repeat it. The administrators and staff must have taken these concerns to heart, because this year nearly all of the permanent exhibit has been translated into English. As of last week, only the third floor exhibit on the colonial wars is missing a translation, and I hope it’s added soon, because independence leaders in Africa and low-level military officers from Portugal played the most critical role in ending the dictatorship. [Update May 2018: This exhibit has been translated into English as well.] The 1974 Carnation Revolution was first and foremost a military coup led by the radicalized officers of the MFA (Movimento das Forças Armadas/Armed Forces Movement), who had served in the Portuguese colonies of Africa and seen their young draftees killed and wounded, or forced to carry out atrocities, for the aggrandizement of the Fatherland’s leaders. As someone who grew up during the Vietnam War, I found much that was familiar in this exhibit. But in a democracy like the United States, we were able to pressure our leaders to end the war. The people of Portugal didn’t have this luxury of protest, so the repressive government itself had to go.

Planning a trip to Lisbon? Add the Aljube Museum of Resistance and Liberation to your list of things to see. The exhibit is free, underscoring the value the sponsors and Portuguese people have placed on their struggle for democracy – and what it can teach the rest of the world. [Update May 2018: The museum now has a nominal entrance fee. It also has added temporary exhibits on the ground floor. When I visited, the temporary exhibit featured the work of José Dias Coelho, a sculptor and painter assassinated by the PIDE in 1961. The woodcut of the printing press, above, is one of his works.]