Categories Menu
Home » Blog » A Message from Portugal to the World

A Message from Portugal to the World

Elections for the European Parliament take place this weekend, and in many of the EU countries, anti-democratic and neo-fascist parties are poised to increase their share of the vote. Among them are Matteo Salvini’s Liga party in Italy and Fidesz under Hungary’s Viktor Orbán, who was recently hosted by the like-minded Donald Trump at the White House. 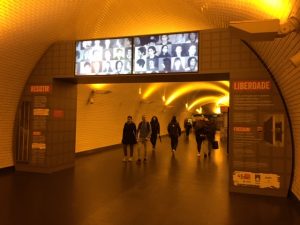 Portugal is currently one of the few EU countries that lacks a significant fascist movement or party. When I ask my Portuguese friends, they talk about the country’s recent experience of right-wing dictatorship. Last month, the country celebrated the 45th anniversary of the Carnation Revolution that ended 48 years of brutal fascist rule. In the Baixa-Chiado metro station, one of the busiest and a station heavily frequented by tourists, there’s an exhibit commemorating the thousands of political prisoners from the 1930s to the 1970s. One may read their names in tiny letters and see some of their faces projected on a video screen along with photos of the notorious prisons, including Aljube, Caxias, Peniche, and the Tarrafal concentration camp.

In Portugal, schoolchildren are taught about life under fascism. Few other European countries have come to terms so thoroughly with similar legacies. In Spain, the silence continues, in large part because the Franco regime didn’t end with revolution but with a negotiated return to democracy after the dictator’s death. Negotiations included amnesty for the regime’s crimes against humanity and a guarantee that no one would search for the mass graves, no one would destroy or even question the fascist monuments to the fight against Communism such as the Valle de los Caídos (with parallels to the continued display of Confederate monuments in the U.S. South), and no school would teach about the 1936-39 civil war in any depth. While Spain has been slower than other countries to sprout a neo-fascist party, Vox has emerged and allied with similar parties in France, Italy, and other locales.

Similarly, many of the former Communist countries of Eastern Europe have seesawed into right-wing authoritarianism. Hungary is the most glaring example, but Poland is not far behind, and the only difference between Fidesz and Law and Justice — both of which have moved to change the electoral laws and judiciary to guarantee that they are never voted out of office — is that Orbán has allied with Putin and Russia while the Poles remain distrustful of their historic foe to the east. In Germany, most of the support for the virulently racist AfD party comes from the former East, where there had been no concerted effort to come to terms with Nazism but rather to blame capitalism, imperialism, and the West in general for a regime that the majority of Germans after 1934 supported.

Most of the countries in Europe have very brief democratic traditions, but I’m not sure that lack of experience with democracy is the important factor here. After all, one of the world’s oldest democracies is sliding toward authoritarianism along the same path as Hungary and Poland and another is facing complete paralysis following an ill-advised referendum. 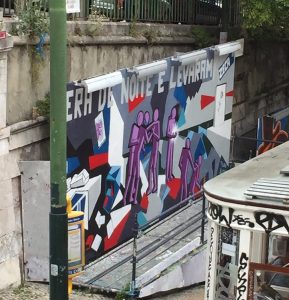 A mural in Lisbon based on “Era de Noite e Levaram,” a song about the arrest of a political prisoner written by Zeca Afonso and Luis de Andrade.

We are learning that democracy is not something that can be protected by laws but is dependent on elected leaders and individual citizens to uphold values and norms. Those voters and their representatives need two things to do so — an independent media and education that doesn’t hide or whitewash the past but that addresses it in all of its ramifications. It’s no surprise that locations in the United States where the Confederacy is still honored — places built on the subjugation and forced labor of human beings — now strip citizens of their voting rights, incarcerate at the highest rates per capita in the world, and are seeking to impose draconian restrictions on women’s bodies (ones that will lead to even higher rates of incarceration). It’s also no surprise that nations, or parts of nations, that took no responsibility for their part in genocide but blamed others are now supporting so-called “populists” who seek to silence opposing views, shut down media and universities, and have carried out or supported new waves of genocide.

While in Portugal, I’ve read reports from home of rallies where the president and his supporters are calling to “lock them up” — “them” being federal workers doing their jobs, leaders of the opposition party, women seeking control over their bodies, immigrants, journalists, and at this rate, anyone who may be deemed a dissident. Threats to imprison should not be taken lightly or dismissed as campaign rhetoric. Too many places have locked up dissidents, and in Portugal where it happened for almost five decades, there’s widespread agreement that it should never happen again.