One of the best things about travel is getting to know a place and its people. I have fond memories of the many countries I’ve visited, and upon returning home, I follow the news to find out what has happened since my departure. The smaller the place, the less likely I am to hear news, but I’m very good at digging when I care. 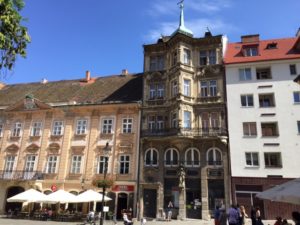 During my walk through Bratislava last June, I noticed a growing presence of police in the main square and what looked like preparations for a major event. I didn’t think much of it at the time. Both Austria and Slovakia were celebrating religious holidays, and as a result, a lot of places, including Bratislava Castle were closed, though one could still stroll the grounds. Holidays usually mean speeches and concerts, and I figured there would be something that I would unfortunately miss, as I had to meet my husband for dinner in Vienna that evening.

Then I saw street closures and the rerouting, followed by the partial shutdown, of public transportation. By this time, I’d connected with a group of college students from West Chester University near Philadelphia, who were attending a summer abroad study of German and like me, had taken a day trip. None of us spoke Slovak, but they were hoping their German — many residents of Bratislava work in Austria and speak German — would help us walk to the train station. No luck. We ended up walking on a street parallel to the train station but in the wrong direction. 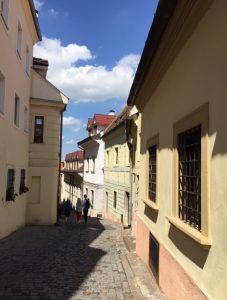 It was easy to get lost in Bratislava’s narrow, winding streets of Old Town.

A young man on a bicycle noticed us huddled around a map and asked if we needed help. He spoke some English, more English than the students spoke German and I suspect that, like many young Europeans, he was eager for an opportunity to use it. He told us that the event at the main square was a demonstration against government corruption. Government officials all the way to the once-popular prime minister, Robert Fico, had become entrenched and more interested in lining their pockets than in funding education and helping the people. Students and young people in general formed the nucleus of the opposition. I asked if we should try to avoid the demonstration — usually good advice when one is in a foreign country.

In recent weeks, I’ve been thinking about the students and their demonstrations against government corruption, because on February 26, this small, generally peaceful country was rocked by the execution-style killing of 27-year-old journalist Jan Kuciak and his girlfriend Martina Kušnírová in Bratislava. Kuciak wrote for the website aktuality.sk about the Italian crime syndicate ‘Ndrangheta, and after his death seven people believed to be associated with this group were arrested and then released. In the following weeks, it became clear that high-ranking government officials also had close ties to organized crime. Demonstrations in Bratislava’s main square grew larger, until one last weekend that drew around 70,000 people with satellite demonstrations in 35 other towns and cities in Slovakia. Like the young man I met last year, the demonstrators now called for prime minister Fico’s resignation and an ethical housecleaning.

Fico, the prime minister for the last 10 of 12 years, has been a fixture of Slovakia’s political scene ever since the country separated from the Czech Republic in 1993, four years after the Velvet Revolution ended Communist rule. Popular pressure forced him to resign yesterday, March 15, a historically significant day as it was the Ides of March, the date of Roman Emperor Julius Caesar’s undoing.

Because Fico’s deputy and fellow party member replaces him, there’s no guarantee of policy changes or early elections, but these events have shown the power of mounting popular protests. I wish the Slovak people well in this next chapter of their history and hope that the influence of organized crime in the government ends and all involved with the murder of the young journalist and his girlfriend are brought to justice.

A tourist spot in my own neighborhood.

I also think of the many tourists from around the world who have come to my New York City neighborhood. I enthusiastically help them find where they’re going and enjoy talking with them about the city and our current political situation if they ask. I realize we’re going through a difficult political situation of our own, with our young people poised to march on Washington, D.C. next Saturday, March 24, to protest lax gun laws, the oversized power of the National Rifle Association, and its buying of politicians that contributed to the deadly shooting at Marjory Stoneman Douglas High School in Florida last month.

One of the benefits of travel is the discovery of our similarities — for instance, that young people in Slovakia and in the United States have come together peacefully, in large numbers to protest governments that enrich themselves while defunding education, that allow powerful and violent forces to attack our children, and that refuse to change despite overwhelming evidence that change needs to come. Our humanity and desires for a better future connect us.