This past Tuesday, December 10, I started over. That day saw my move to a new apartment and a few hours later, this announcement.

It’s my first book announcement since April 2014, and the first one to appear in the Children’s Bookshelf section of Publishers Weekly, with all of the excitement that a PW announcement brings. (Both my Curbstone Press books had no formal announcement because I was unagented at the time, and my other two appeared in Publishers Marketplace but not PW.) I’m excited and honored to be working with Zetta on MOONWALKING, a novel-in-verse that explores friendship, race, and making your own way together when everyone wants to shove you into separate tiny boxes. 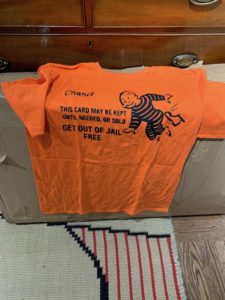 Agent Jacqui sent me this t-shirt after she helped to sell MOONWALKING, which ended my 5+ year forced publishing hiatus.

The fall 2021 release coincides with the 40th anniversary of the PATCO strike, which plays a huge part in JJ becoming the New Kid and one of the few White kids in his Brooklyn school. The failed strike also played a huge part in the decline of unions in the United States, the rise of inequality, and the destruction of both labor and community solidarity. JJ and Pie are trying to connect and offer support in this “you’re on you’re own” environment where sometimes help comes from unexpected places. It certainly has for me!

Over the next months and years, you’ll hear more about MOONWALKING and another project I can’t mention yet. Except for translations, I’ve been out of publishing for so long that I feel in a way like a debut author. While many of my friends and colleague from the days of Gringolandia, Surviving Santiago, and Rogue are still around, others have left the field, including my old agent and Surviving Santiago‘s editor. I have many new people to meet. Among them are authors who debuted from 2016 to 2019 whose work I’ve read and admired, as well as those who will be publishing next year and in 2021. I look forward to re-entering publishing as a colleague as well as a fan. 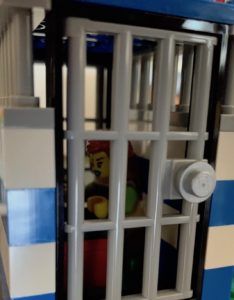 One of the hardest things about being in Author Jail, or any creative “jail” is separation from an artistic community of which you were a part. But I kept writing anyway!

I experienced a lot of disappointments during my 5+ year publishing hiatus. There were the rejections and nonresponses that eviscerated my sense of myself as a professional writer. After all, I had three published books, one of which won major awards and distinctions. How could an editor say my concept was great but my execution wasn’t? Or they couldn’t connect with my protagonist? Or they couldn’t find the time to read the manuscript they requested from my agent — perhaps because they figured my best writing days were behind me? There were the two projects, companions, that I set aside when a famous author “scooped” me, with a title almost identical to one of mine. There were the teaching positions that didn’t work out when the program wanted someone with more “experience.”

Just as tough was the professional isolation. I felt I still had something to contribute, but I no longer attended conferences or wrote for high-profile venues. I was in Author Jail, separated from the community for infractions I didn’t comprehend or couldn’t control — middling reviews of my later books, less than blockbuster sales, a sense of being out of step with trends. All I knew how to do was to keep writing, trying new things (including verse novels), looking for help from unexpected places. And putting my thoughts about writing, diversity, and culture and events on this blog where anyone can find it through search engines.

In this way, JJ and Pie’s story in MOONWALKING is my story. It’s not my first novel in verse; that distinction goes to one of the scooped books I’ve put aside for now. But when I met over the summer with Zetta, who turned to self-publishing when  excluded from the industry more than 10 years ago, she and I came up with a way to spring me from Author Jail. In addition to Zetta, I’m grateful to my agents at Storm Literary Agency, Jacqui Lipton (who’s moved on to start her own agency, Raven Quill Literary Agency) and Vicki Selvaggio; Zetta’s agent at Writer’s House, Johanna Castillo; and our editor at FSG, Grace Kendall, who “got” the story immediately and shepherded it through the often-fraught acquisition process. 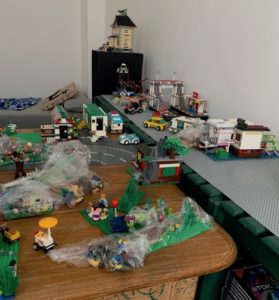 Tomorrow Zetta and I are meeting at a coffee shop across the street from my new apartment, one that had its own grand opening the day Richard and I moved and the book announcement came out. Zetta and I will discuss the next steps for MOONWALKING and catch up in general, now that she’s moved to Pennsylvania. You can read about her writing and teaching on her blog, which I follow and always find inspiring. 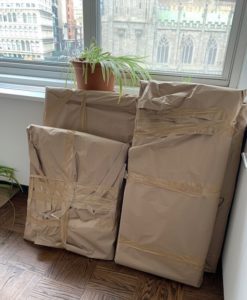 So back to unpacking. My husband is efficient, so we’ve now whittled 79 boxes down to five. My Lego town is still in disarray, and I’m planning to redesign parts of it. With more storage space in the new apartment I now have the space under the table to add a train track, which has been my goal for a very long time. I’m waiting, though, for a train set I like and one that will be compatible with new equipment for a while, since Lego is known to change their power systems from time to time. I need some water plates for my new MOC houseboats, and with more space on my tables and shelves, I need buildings to fill it. Pictures to come! And more book news to come as well…