While Olive the Sheep made her U.S. debut, I took my daughter to Berlin, Germany to see the house and the city where her grandfather grew up. Maddy never met Richard’s father — Karl Lachmann died in 1968 when Richard was 12 years old — but she heard many stories and wanted to see the place where he was born and lived until 1933, when Hitler came to power. Karl, who was Jewish, could no longer continue his legal studies under Hitler’s regime and thus left, first for France, then the U.K., and finally the U.S., where in 1946 he became part of the prosecuting team for the Nuremberg Trials. 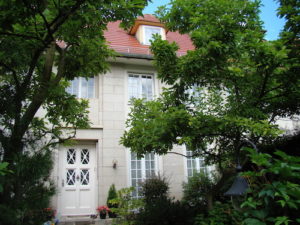 The house in Berlin where Richard’s father grew up, photo from 2008.

In 2008, Richard and I traveled to Berlin to see his father’s house in the Westend neighborhood and to gather documents for his citizenship application. Germany currently restores citizenship to all those who had it stripped during Hitler’s regime, their children, and their grandchildren, which includes Richard and our two children. We learned that Karl’s mother, Margarete Lachmann, who remained in Germany after both her children emigrated, was deported at the end of 1941, along with her cousin who lived next door. He, Ludwig Goldmann, was murdered in Minsk soon afterward, while she was murdered in Riga along with many other deported German Jews, in January 1942. After Richard and I returned from that trip, I wrote in MultiCultural Review about the grandmother he never met:

For the rest of the decade [the 1930s], her two children begged her to emigrate. She refused. By the time she agreed to leave, the Second World War had begun, Hitler had sealed the borders, and her travel documents with a visa to Cuba never arrived….

No one knows why she chose to stay — even after the Nazis’ repressive laws forced her two children out of the country. No one from her family remained in Germany to tell us of her life there, and whatever friends she had in those years most likely met the same fate that she did. Her descendants must fill in the blanks. As I read her name in a list of Holocaust victims at the Jewish Museum in Berlin, I imagined a lonely and frightened 53-year-old woman — a woman only a few years older than I am now — separated from the children to whom she had devoted her life, stepping from a fetid cattle car into the perpetual night of a Latvian winter. My daughter, whose middle name is that of her unknown great-grandmother, wonders if Margarete Lachmann had a boyfriend in Berlin, one whom she would not leave despite the growing dangers. (Fall 2008, p. 4) 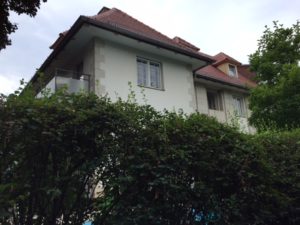 Exactly ten years later, I brought Maddy to that house. It appears less well kept than in 2008, with overgrown vegetation and rust and water stains on the facade, though the swimming pool that the new owners installed in the front yard is still in good condition. (After the war, the ownership of the house, which fell within the borders of West Berlin, reverted to Karl and his sister, but, with no intention of returning, they sold it.) However, on the sidewalk outside the gate are memorial plaques to Margarete Lachmann and Ludwig Goldmann, as this was the last place they resided before their deportation. 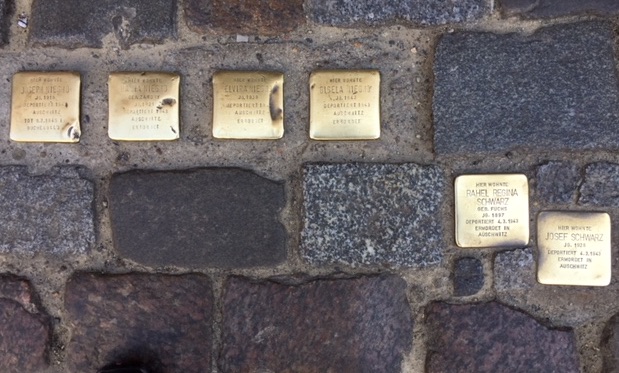 Many of the memorials to the Berlin Jews are in the Mitte section, where Jewish immigrants from Poland came to live. 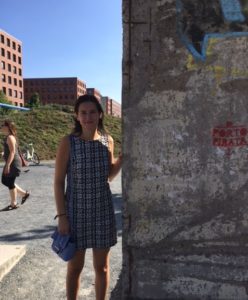 Maddy standing next to a piece of the Berlin Wall at Potsdamer Platz.

These memorials to Jews deported and killed by the Nazis are located all over Berlin, the result of efforts by the city government and local nonprofits to remember the city’s Jewish community, which numbered around 160,000. So far, about a third of the small plaques have been placed — some through the efforts of organizations, others through relatives of the dead. The city’s residents maintain the plaques; it’s common for nearby schools to clean them as part of community service projects. Berlin’s Jewish community is growing again — in large part through immigration from Israel, the United States, and elsewhere in Europe — and Jewish residents clean and repair plaques during the High Holy Days in the fall and on Yom Ha’Shoah (Holocaust Remembrance Day) in the spring. 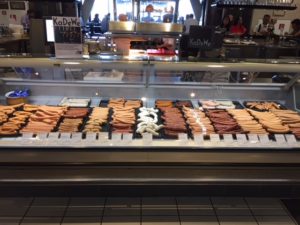 Maddy enjoyed the many varieties of sausages at the food hall in the KaDeWe department store.

Maddy appreciated this opportunity to learn about her family’s roots, and she fell in love with Berlin. She said that she felt at home in the city despite not knowing a word of German and this being her first visit. She also enjoyed the food, especially the wiener schnitzel, the marzipan, and the currently popular curry wurst. She is already making plans for a return visit to discover more of her heritage and what Berlin has become following years of repression, war, Cold War division, and reunification.