Categories Menu
Home » Blog » A Day at the Ranch

A Day at the Ranch

Last month, our friend Luís Capucha invited Richard and me to a daylong visit at a ranch in the Alentejo. Luís’s wife, Fátima, was recently elected president of the tertulia in their town of Vila Franca de Xira, which puts her in charge of the promotion of bullfighting and related activities as part of the region’s cultural heritage. The bulls and horses that are part of the Portuguese bullfight come from ranches in the Ribatejo and Alentejo region, and Fátima wanted to meet with each of the ranchers to make sure the animals met quality standards and were raised in humane conditions. 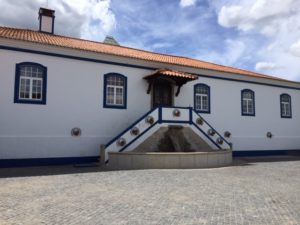 The house where the family lives.

After a drive of about 90 minutes, we arrived at the ranch of Amélia and Francisco Gregório de Oliveira near the village of Ciborro. The three-generations of Gregório de Oliveiras own a ranch of approximately 24 square kilometers, which comes to just under 6,000 acres. They bought it 40 years ago and now raise Lusitanian horses, a sturdy, gentle breed often used to teach horseback riding to children. They also have a herd of cows for breeding and another herd of two-year-old bulls that we were unable to find on our tour of the place. How does one lose a herd of 30 young bulls? The animals are free-range, moved among a couple dozen pastures to make sure they have access to adequate food and water, and apparently this herd was recently moved to a fresh pasture after grazing their old one. 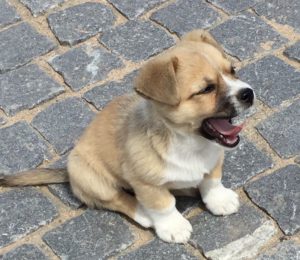 Upon arriving at the ranch, we were greeted by this adorable puppy. His people took us to a barn where a yellow Labrador Retriever was nursing her litter of eight black Labs. The father is a chocolate Lab, which left several of us scratching our heads. We saw the stables and the outdoor area where cattle are branded and given medication when needed. Having seen working farms in Vermont and Wisconsin, I was thoroughly impressed by the cleanliness of these areas and was assured that the Gregório de Oliveiras didn’t do a special cleaning for us. In general, hygiene standards for agricultural facilities in the EU are far higher than in the U.S., and breeders for export have an even higher bar. 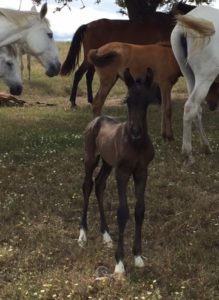 On our tour, we learned about the animals and heard their stories. In the horses’ pasture, we saw a foal that hadn’t been there the night before, rising to his feet for the first time. Other foals stood on wobbly legs nursing from their mothers’ teats while their mothers nuzzled them. The cows grazed alongside their calves, and some of the young ones got into little tiffs with their peers. In one pasture, we saw a lone black cow. Apparently, she had gotten into a fight with some other cows, and they had exiled her to this pasture. What would become of Miss Unpopularity, as I dubbed her, a girl after my own heart? Would she be left alone to live and die out there, or would the others let her rejoin them after a time out? I was relieved to hear that after an interval clear only to the bovine world, she would be readmitted to the herd. In the meantime, we were told to avoid her, because an isolated, angry or afraid animal was likely to charge, and she had a significant advantage of speed and weight. 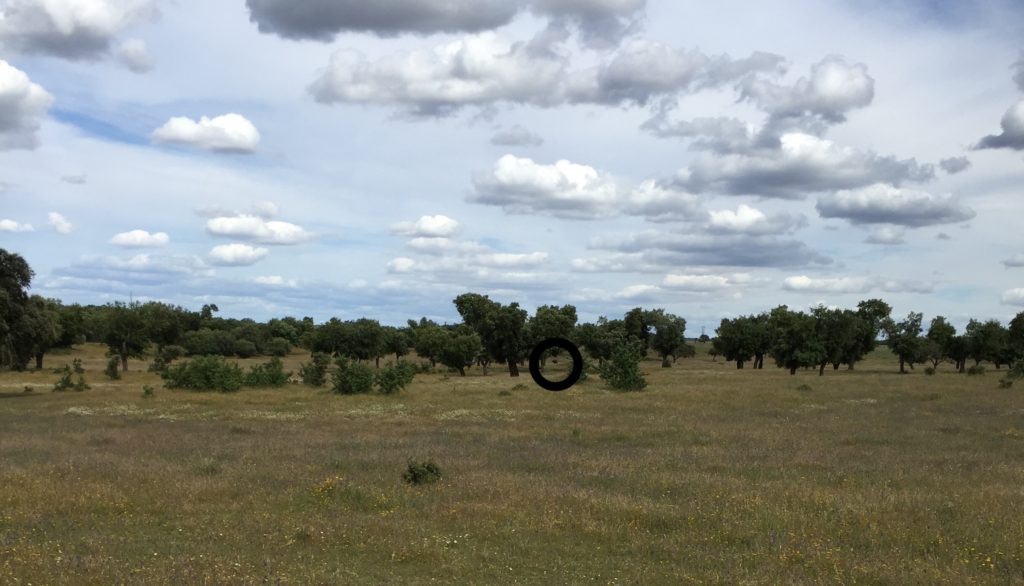 The cow exiled by her mates, circled and very far away. 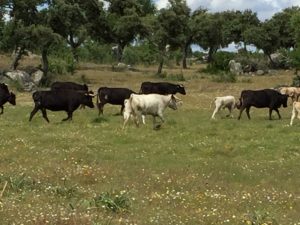 Cows with their calves.

Luís explained that bullfighting bulls, such as the ones raised on this ranch, become quite aggressive between the ages of one and four. Some of them will die butting heads with their herdmates before they ever get to the ring. On our way to lunch, we passed other herds of more gentle bovines Typically, the large, rust-colored cows and bulls are less aggressive, and are raised to produce milk and meat. In the ring, they’re the animals that lead the bullfighting bulls out of the ring once the highly stylized fight is over. In the Portuguese bullfight, the bulls are not killed in front of the audience, as they are in Spain, but they become food anyway.

When I told my Portuguese neighbor back in Albany that I didn’t eat red meat or pork, she responded that these animals wouldn’t exist if they weren’t being raised for food. And animal behaviorist and autism advocate Temple Grandin writes 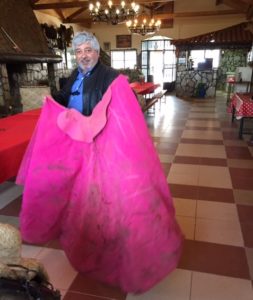 Our friend Luís holds a bullfighter’s cape in the tertulia. Those things are heavy!

I can’t say that the bullfight is a stress-free experience for the bull, who finds himself in an unfamiliar place, swarmed by humans waving capes in his face and pulling his tail, and pierced by daggers. On the other hand, the ritual, according to Luís, is one founded on respect for the bull and his fierceness as a worthy adversary for the bullfighters. While recognized as part of several countries’ cultural patrimonies, bullfighting is a controversial sport, as I saw when I checked out the Google page for the Praça de Toiros Palha Branco in Vila Franca de Xira and saw it classified as a “slaughterhouse.” 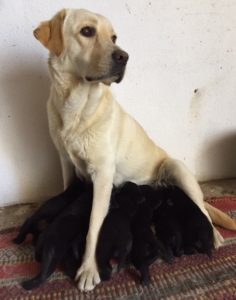 A yellow Labrador Retriever with her 8 pups, all black.

In any case, the lives of the animals on this farm appeared to be a pleasant one for the time they’re there. The ranch’s owners are also renovating a storage space and adding buildings in order to create a resort devoted to horseback riding, as well as to hosting conferences in the large dining hall also known as a “tertulia.” I’ve talked to several people who are thinking about creating specialized experiences on property they own in Portugal, and I think it’s an area to develop tourism further and to appeal to repeat visitors who may not want to see the sights in Lisbon or Porto again but would like to sign up for a yoga retreat, a baking class, or family horseback riding. 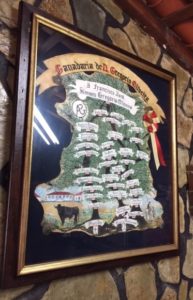 The ranch owners’ family tree, on a wall in the tertulia.

We took a break from touring the fields to drive into the village of Ciborro, population 714, give or take a few, and enjoyed a lovely lunch at the A Júlia cafe and restaurant. The food was very good, and the owners did a great job of accommodating the non meat eaters (me) with a tasty vegetable omelet and fried potatoes. I enjoyed hearing what it’d like to live in a small village, basically a main street and a few cross streets along with the surrounding ranches. Everyone knows everyone else, and while we were there, Amélia and Francisco’s grandson saw his schoolteacher. On the TV, which occupied a prominent place in the dining room, reports of the upcoming EU parliamentary elections gave way to the afternoon’s football (soccer) game. The weather was perfect, and so was the company. I’m glad to have received and accepted this invitation to see a part of Portugal far removed from the usual tourist haunts, but one that may soon become a destination for some. 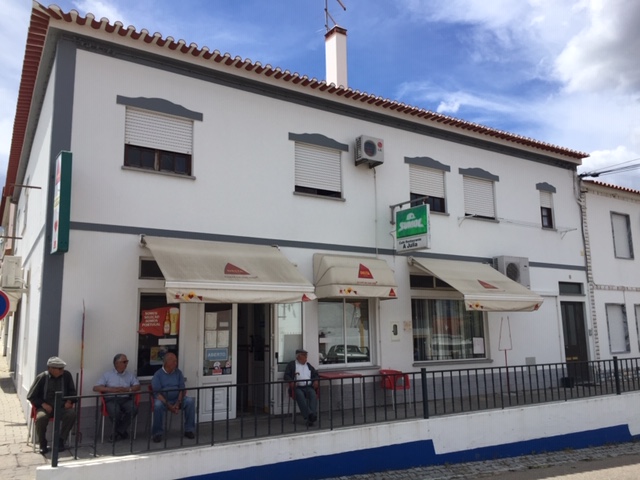 The A Júlia restaurant in the village of Ciborro, Portugal.