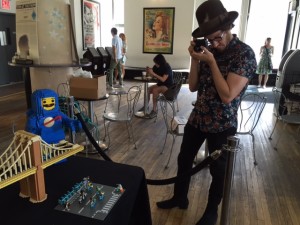 A professional photographer from the PR company associated with the LEGO Brickumentary at the Angelika Film Center.

If Harper Lee had become LEGO-obsessed, it would have been a good reason not to have written another book. I want to return to my next historical novel, but several events have intervened. I was asked to build a new MOC (My Own Creation) related to New York City, to put on display at the Angelika Film Center in conjunction with the premiere of the new LEGO Brickumentary. Earlier, I took part in a community build in Harlem. And the annual bulk order came in, which required me to pick it up and help sort the pieces that the various NYCLUG (New York City Lego Users Group) members ordered. Oh, and now that I have a whole lot of new pieces, I have to build something with them. 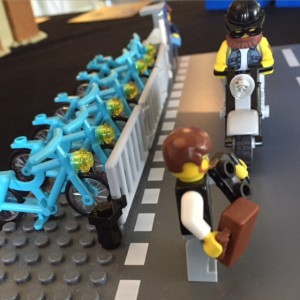 Disaster at the Citibike stand.

For my New York City-related MOC, I chose to build a Citibike stand. Since its arrival three years ago, Citibike has become a popular way for New Yorkers to get around, as well as a new peril for pedestrians like my husband and me. That said, I applaud the new wheels and prefer them to the cars that clog our streets and which are even more hazardous to pedestrians and the environment. (However, as one of my photos shows, pedestrians are not always innocent victims of collisions.) 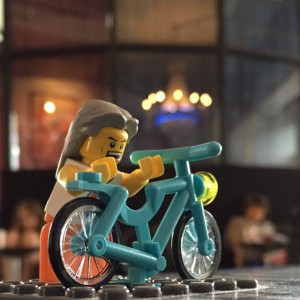 The bicycles came from the bulk order, and I had to make sure to order the wheels as well. Not much you can do with 50 bicycle frames, and if you mess up the order, you have to wait a year for your next chance — though there are other places to get parts at somewhat higher prices. For the bike stand, I photographed a stand near me, at Sarah Roosevelt Park on the corner of Chrystie and Rivington Streets in the Lower East Side, downloaded it to my computer, and shrunk it down to LEGO size. The clear packing tape creates the effect of a glass window over the map. 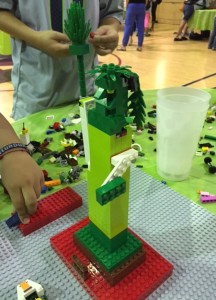 A Caribbean-inspired Statue of Liberty, built by the PowerKids campers.

The exhibit featured the Citibike stand along with the Trio Elétrico that I’ve shown in various places and pieces by other NYCLUG members Sid Dinsay and Don Rice. Don contributed the micro George Washington Bridge and a replica Tony Award, while Sid brought his classics including a segment of the Brooklyn Bridge and a large Benny the Spaceman. Earlier in the week, Sid, Kent Ng, and I took part in a giant LEGO building activity at the PowerKids Camp in Harlem sponsored by the NYC Mission Society. The Brooklyn Bridge was a hit there as well, and the kids did a great job with their own creations, built with bricks donated by LEGO for children’s programs in the community.

I am now busy at work on my first full-size modular MOC. I have every one of the modulars LEGO has made since 2006, and they are the heart of my Little Brick Township. I’ve wanted to build my own modular for a long time, and the arrival of the bulk bricks, along with the release of the Friends Recording Studio, a small but useful set, has allowed me to build a radio station in my town. 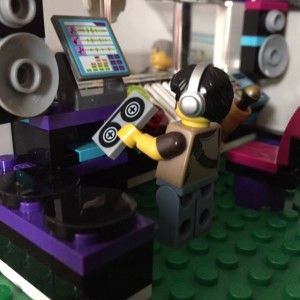 The basement studios, which I have just finished, are based on WRPI, the Upstate Underground, which I also used as my model for the radio station in Surviving Santiago. I found minifigures that look like Tina’s father and his producer, Ernesto Moya, and in my first pictures, we see Ernesto slipping a tape into the player (this being 1989) and airing some tunes before Papá’s popular talk show, Oye, Nino, begins. Papá is interviewing a political candidate, who’s all dressed up and smiling for the camera.  Papá knows that you don’t have to dress up for radio, and he never smiles. 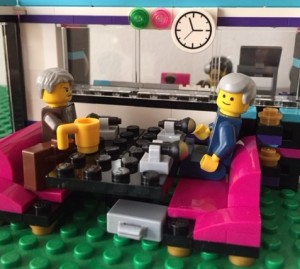 Since taking this picture, I’ve changed the green baseplate for a tan one because it works better for showing the grout between the cobblestones on my sidewalk. (If you have greenery coming up between cobblestones or cracks in the sidewalk, it is never a good sign.) The colors of the radio station still don’t match all that well, but as I wrote to one Instagram commentator, “Show me a radio station with matching decor, and I’ll show you a radio station that isn’t very good.” 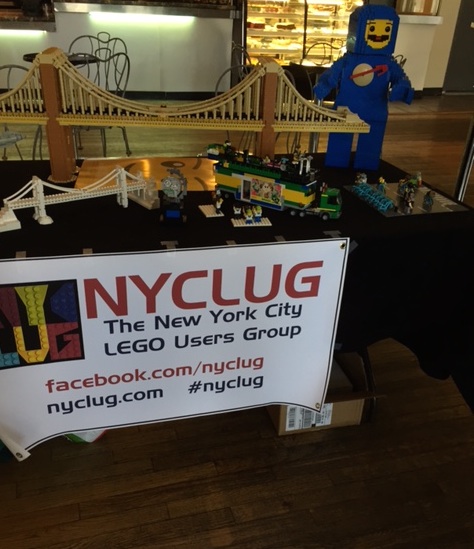