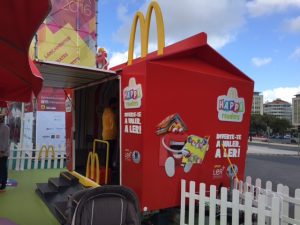 In my famous “Trendsetter and Hipster’s Guide to Enjoying Lisbon” blog post, one of the pieces of advice I offered was to look in metro stations for entertainment opportunities. This advice has served me well. In addition to the upgraded touch-screen kiosks listing events in the upcoming weeks, there are the traditional billboards and the free Metro newspaper. In one of last week’s newspapers, I found an article with the schedule of the 86th Lisbon Book Fair (or in Portuguese, Feira do Livro). The article promised that this year’s festival would be bigger and better than ever, with hundreds of booths and publishers from outside as well as within Portugal.

The Book Fair began last Thursday, May 26 and runs through Monday, June 13, so if you’re reading this article when it first appears, you have time to get there! (If you’ve stumbled on this piece months from now, don’t fret. The 87th Lisbon Book Fair will take place around this time in 2017.) 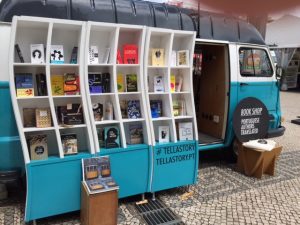 With my rudimentary math skills, I’ve figured out that the fair started in 1930, give or take a few years for cancellations. In 1930, Fernando Pessoa ruled Portuguese letters as a poet, novelist, journalist, translator, and critic. I’m sure he and his closest colleagues had a major role in this event. At the same time, the country lived under a military dictatorship, and writers worked within the constraints of increasingly tighter censorship, culminating in the 1933 decree of the Estado Novo that banned all “immoral” and “subversive” expression. The literary writers of the time avoided politics for the most part — many of them, Pessoa included, were conservatives or monarchists, as appalled by the rise of communism as the country’s leaders. The book-buying public was a small one, restricted to the country’s educated urban elite. More than 60% of Portuguese did not know how to read or write.

Today, Portugal’s children attend school and the literacy rate is about 95% (lower for women than for men, in large part as a vestige of the dictatorship that ended in 1974). It makes sense, therefore, that the book fair has grown exponentially in size, duration, and number of public activities since 1930. The country’s encouragement of early literacy was very much on display, for instance with a McDonald’s-sponsored reading game and giveaways of books. 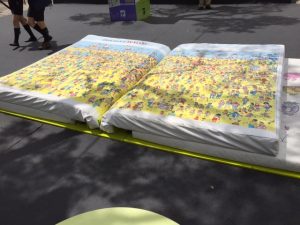 When I first arrived at the fair on Saturday morning, I practically had the entire Parque Eduardo VII to myself. Despite broken clouds, the weather forecast called for rain, and everyone knows that rain and books don’t mix. About half an hour after I arrived, while I was chatting with a young man selling Portuguese classics translated into French, German, and English, the predicted cloudburst occurred, and I ended up helping him set up an umbrella and wiping raindrops from the bookshelves. Then a gust of wind carried the umbrella away! Oops!

We managed to save the books, and after the sun once again emerged, I went on my way. The booths were divided between large publishers like LeYa and Porto Editora , with their multiple imprints clustered around a stage for presentations and signings and a tent where customers could pay for all their books — general adult titles, children’s books, graphic novels, and specialized books in various fields — in one place. Many of the country’s key journalists, critics, novelists, and political figures gave talks and panels, including the newly-elected Prime Minister on opening day. Other authors signed books inside the booths for individual imprints. 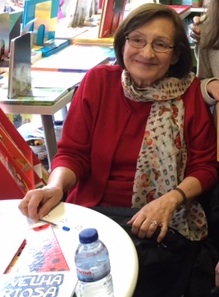 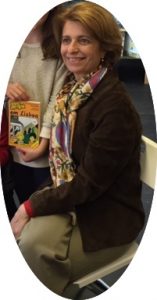 Isabel Alçada, with one of the “Uma Aventura em…” books I read years ago.

For instance, at the booth for the Caminho imprint of LeYa I met Ana Maria Magalhães and Isabel Alçada, co-authors of the “Uma Aventura em…” series for middle grade readers that now contains somewhere north of 100 volumes. This was the series I read years ago when I first started to learn Portuguese, so I have a soft spot for these women who have contributed so much to Portugal’s literacy efforts as both prolific authors and, in Alçada’s case, as a former Minister of Education (a job she apparently liked a lot less than writing). 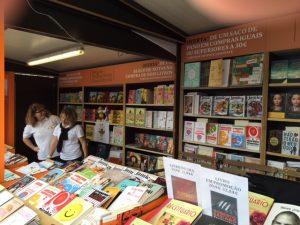 The Penguin Random House booth, where I introduced myself as one of the “family” and bought a book.

I was surprised to see some of the large multinational publishers relegated to medium-size or small press status in Portugal. DK Publishing — a big international player and the publisher of large, colorful travel guides and LEGO books — had a table in the small press tent. Penguin Random House had a rather ordinary booth in the middle of a row that included other educational publishers, the Brazilian imprint Companhia das Letras, and Planeta Tangerina, the publisher of multiple books I’ve translated for Enchanted Lion. I didn’t meet any of the editors, authors, or illustrators with Planeta Tangerina, since the distributor represented and sold its books and others under the distribution umbrella. I did buy a new book, though, a humorous “dictionary” by acclaimed Portuguese novelist Gonçalo Tavares, illustrated by Madalena Matoso. (Tavares’s adult novels were big sellers in the LeYa area.) 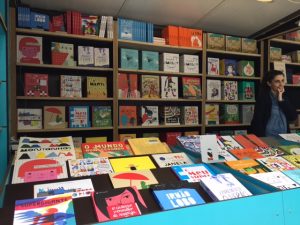 Planeta Tangerina appeared via the distributor, who had the publisher’s earliest books and the most recent.

In addition to the large commercial Portuguese publishers, the quirky and artistic small presses, and the smaller outposts of multinational publishers, the fair offered an array of academic, specialized professional, and religious publishers. The Catholic publishers had a significant presence despite the precipitous decline in church membership and religious observance in Portugal since the end of the dictatorship. Perhaps the Church’s new direction under Pope Francis will help to revive interest in and broaden the offerings of the these publishers.

My morning trip to the fair ended earlier than expected, not because of the rain, but because I ran out of money! After lunch and a trip to the bank, I returned around five in the afternoon. With the rain and clouds gone, the fair was jam-packed, and I found it a struggle to make it back to all the booths I’d marked earlier to return for a purchase. Fortunately, none of the books I wanted had sold out — though I did get one of the very last copies of Ombela, a picture book by Angolan writer Ondjaki, gorgeously illustrated by Brazilian artist Rachel Caiano. (Don’t worry — they’ll make more!) 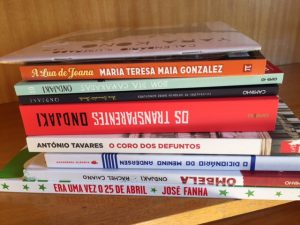 Only some of the books I bought on this trip. How will I get them home?

As I waddled back to the university residence, I wondered how I’ll get all those books home without having to pay a weight penalty at the airline counter. I’m sure I’ll figure something out, but in the meantime, I’m thrilled with my new purchases, which I’m looking forward to reading and translating. Despite its small size, Portugal has a thriving literary culture, one that has come to incorporate important authors from Lusophone Africa such as the Mozambican writer Mia Couto and Ondjaki from Angola. There are graphic novels that explore the colonial wars and their aftermath, and books that reconsider the country’s history and look forward to its future.