A Basket of Books to Address Our History

Shortly after Hillary Clinton’s “basket of deplorables” comment in September, I emptied my basket of recyclables and filled it with books — not to recycle but to recommend. While I took issue with her use of the noun rather than the adjective, because it implied a fixed character rather than a pattern of actions that could one day be changed, I was concerned about the open racism, sexism, homophobia, and xenophobia that became part of the election and has persisted since November 8.

I had planned to update the post after the election, but when I went to edit it, I accidentally deleted it. Yes, this was an accident, something I need to make clear since the original post led to a rather unpleasant cyberbullying incident targeting me. No, I have not backed down. But my digital incompetence means that I will have to reconstruct the original post with no notes. I’m in the process of archiving my blog texts, but at this point am only up to January 2015. I have a long way to go to get to fall 2016.

The purpose of the original post was to shed light on various forms of bigotry, past and present, through recent young adult books that show the pain such attitudes have caused and how the teenage characters have risen above these attacks to offer hope to readers. 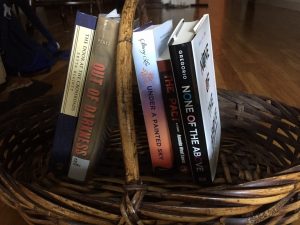 A basket of important books for the times.

I start in the present day with #WeNeedDiverseBooks co-founder I.W. Gregorio’s debut novel None of the Above. Seventeen-year-old Kristin Latimer thinks her life is set. She’s one of the popular crowd in her high school, a star athlete and top student with an A-list boyfriend. A bungled effort to lose her virginity after the Homecoming dance and a subsequent doctor visit leads Kristin to discover that she is intersex, with both female and male genes and genitalia. Rather than showing sympathy or, at the very least, keeping her secret, Kristin’s closest friends, her boyfriend, and eventually everyone else in school turn on her. Because of the bullying she experiences, she becomes too frightened and depressed to attend class. Tipped off by rivals, college scouts question her eligibility. Kristin’s gender and sexuality were determined at birth — part of who she is — but that doesn’t stop her peers from showing both ignorance and cruelty.

Stacey Lee’s debut historical novel Under a Painted Sky begins with a vicious act that we today would call a hate crime. Samantha and her father are the only Chinese Americans living in St. Joseph, Missouri, a jumping off point for the Oregon Trail in the 1840s. One afternoon, Samantha returns home to find her father’s general store in flames with him inside, a fire deliberately set by bigots egged on by one of the town’s wealthiest men. When Samantha kills the man, who is trying to force her into prostitution, she has no choice but to escape. She runs away with Annemarie, an enslaved girl her age; the two disguise themselves as Sam and Andy and join the hordes heading west to the California Gold Rush.

Slavery plays a major role in Zetta Elliott’s time travel The Door at the Crossroads, the continuation of a series she began six years ago in A Wish After Midnight. While Genna, the protagonist of Wish, returns to present-day Brooklyn, her Jamaican-born boyfriend Judah remains behind, sold to a slaver in Georgia despite his free status, thanks to the overzealously enforced Fugitive Slave Act. (One should note the parallels to today’s mass incarceration and long sentences for nonviolent drug offenders who happen to be Black.) Along with one of Judah’s present day friends, Genna returns to the past to save Judah. Judah, from whose perspective much of this novel is told, has managed to escape bondage, but when he returns, he isn’t the same person Genna remembers. His suffering has made him hard and angry, and the violence he has experienced has made reconciliation close to impossible. 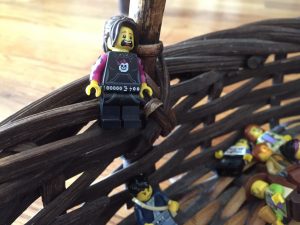 “Excuse me! Where are we going and why am I in this handbasket?”

While students learn that slavery ended with the Union victory in the Civil War, the system of semi-slavery and continued subjugation known as Jim Crow emerged within one decade to take its place. Ashley Hope Perez’s Out of Darkness takes place in the Jim Crow society of East Texas in 1937, where 17-year-old Naomi Vargas, of Mexican parentage, straddles both worlds. Passing as white, she attends the New London School along with her half-siblings — they the children of an Anglo father. She falls in love with Wash Fuller, a black teenager who attends the segregated school across town, but they must keep their relationship a secret. After the white school is destroyed in a natural gas explosion, killing more than 200 children, grieving town leaders scapegoat Wash and his family and put Naomi in an impossible situation.

How do teenagers — and their adults — become willing participants in genocide and other crimes against humanity? Combine denial, peer pressure, living with blinders that only allow concern for self, family, and close friends, and the ease of trading one’s moral qualms for an easier life. We see this happen in Amanda West Lewis’s The Pact, the story of a boy growing up in Nazi Germany. Based on the true story of Hans Sinn, a German peace activist living in Canada, The Pact follows Peter Gruber from age 10, when he loses his best friend in an accident on Hamburg’s docks and is bullied by another classmate. He doesn’t want to appear weak, so he goes along with an increasingly perverse and bellicose system. At the beginning of the war, he watches eagerly as maps change and country after country becomes part of the Thousand-Year Reich. Later, he worries about his mother and his own survival. Only when defeat looms do he and his friends realize they have followed a madman and his ideas to complete annihilation.

I hope that people start paying attention to these stories drawn from history. We will need them in the uncertain times ahead.